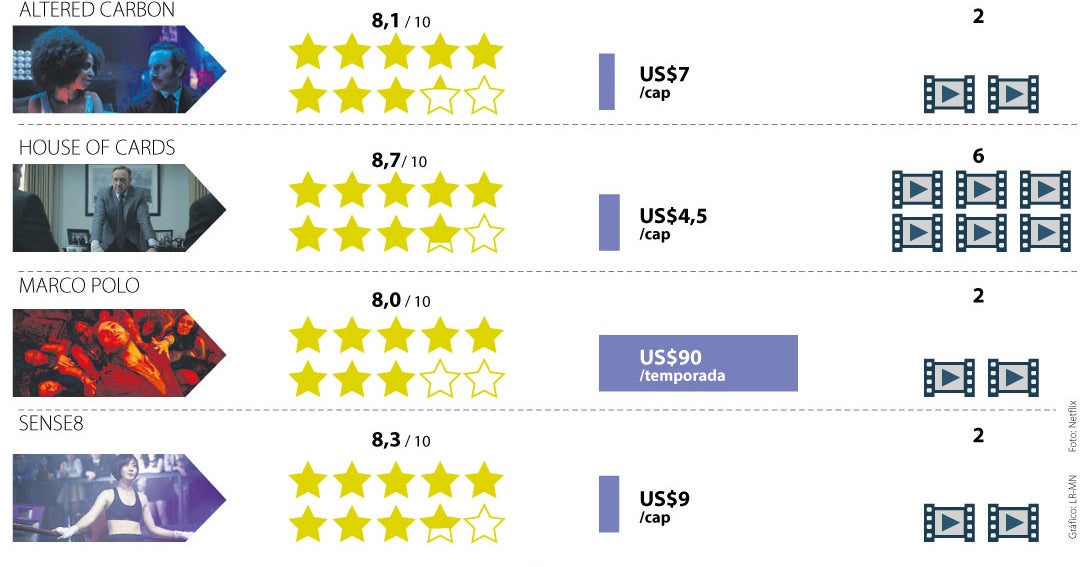 Netflix is ​​one of the streaming platforms that generates the most film production content; However, just as the number of premieres is recorded en masse by the production company, it is often criticized for its speed in canceling series that, on many occasions, do not arrive a month after being broadcast.

The covid-19 pandemic and the restrictions that could prevent the production of new content for streaming were no longer a justification for Netflix to cancel so many series. However, the platform has been questioned by fans, critics and international media for its frequent interruption of the sequence of a premiere series.

From a monetary point of view, one of the key factors that determines the longevity of a series on the platform is its level of audience in relation to its cost of production.

Netflix takes approximately 21 days to determine if a series is profitable for its permanence online. Variables such as the speed at which the chapters are consumed and the audience metrics make the lifetime of a streaming series remain.

However, there have been cases in which series with high audience levels are canceled. ‘The OA’, ‘Sense8’ and ‘Altered Carbon’ are some of the examples of the productions that had an audience on the platform, but whose transmission was abruptly interrupted by the production company.

Bela Bajaria, Netflix’s global television executive, assured the Deadline media outlet that the metrics for the level of renewal of its shows are similar to those of all platforms in the industry (67%). While Ten Sarandos, chief content officer and co-CEO of Netflix, stated in the same interview that the structure of long series no longer makes sense in the current context.

There are a variety of factors that are taken into account when making the decision to cancel a premiere series, among which are the high cost of production compared to the level of audience; changes in the structure of the traditional audience to a modern and more ‘ephemeral’ or ‘superfluous’ one and, lastly, simply not reaching the quality standards in the opinion of the producer.

Fabian Esteban, director and founder of Happy Monkey Films, says that Netflix is ​​reorganizing its content and production to focus more on the audience it wants to reach, a decision that, for the general audience, will diminish credibility a bit.

“The strategy that Netflix is ​​targeting is bittersweet; Although the credibility of the audience is diminishing with the interruption of series with large figures in reproductions, it is also aimed at the loyalty of the target audience, that is, it is not useful to address a mass audience that is not consuming, but to a more selective, with a high level of consumption of streaming content”. affirmed the Colombian director.

Production costs, in addition to being insufficient, can often be drastically high. Such is the case of the series ‘The Crown’, which since its debut in 2016, has been one of the most proclaimed on Netflix. This sequence, which brings Queen Elizabeth II to life, costs approximately US$130 million for each season it airs. It also happens with ‘Stranger Things’, which spends about US$8 million for each episode.

‘Sense8’, for its part, since it was released in 2015 caused a stir among the streaming community. However, one more sequence than the first two seasons was not agreed upon, given that the cost of production per episode is close to US$9 million.

Netflix has just canceled one of the series that, for fans, has been one of the most viewed of the year and that was released just over two months ago, on January 14, 2022: File 81. Although the series dazzled more than one within the audience, it didn’t take long for his name to disappear from the Top 10 list that Netflix casts from its platform, making the decision not to continue with the second season of the series.

The speed at which users consume chapters is another key variable, as Esteban mentioned. The new context of the audience that Netflix promotes does not involve long series, which previously worked and remained on the platform. Now, the bet is made with a view to building a new market niche, with new clients and more dynamic content consumption (faster).

Just as series are massively canceled due to any determining factor (production costs or content quality), with the same frequency they focus on generating more and more audiovisual proposals for this new market niche, which they are creating, educating and expanding.

Why is Netflix canceling so many premiere series? production costs or quality?