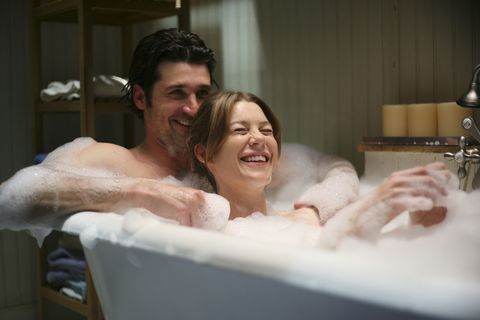 After what Patrick Dempsey and Ellen Pompeo they coincided in an episode of season 17 of ‘Grey’s Anatomy’ and chemistry and magic arose between them again and that, after their last meeting on the red carpet, they affirmed that they would love to star in a project together again, Rumors about a possible new joint series were fired.

However, we will have to keep that peak of enthusiasm from a few weeks ago among our most movie-going and series-loving desires because the very Patrick Dempsey has responded to the rumors while promoting ‘Disenchanted: Giselle Returns’, which opens tomorrow in Disney+.

“I have already seen these rumors”, Dempsey said to Entertainment Weekly. “It’s probably because the 19th season of Grey’s Anatomy has already aired and she’s announced, I think, that she’s leaving the show this season. It’s a real testament to fans who want to see that couple still together and the impact it has.” , assured the formerly known as doctor ‘Mc Dreamy’. “But no, I haven’t read anything, I haven’t seen anything, and I haven’t talked to her about it.”

Patrick Dempsey and Ellen Pompeo, in an episode of ‘Grey’s Anatomy’.

However, Patrick Dempsey does not close the door on a reunion with Pompeo. What the actor explains is not that it will never happen, but that at the moment it is not underway. He explained that with Pompeo he forms a good interpretation team and pointed out that he was “very grateful” to work with her.

In his statements at the presentation of ‘Disenchanted: Giselle Returns’, he defined Pompeo like this: “It’s like if you play tennis or sports or do anything, you want a good partner to play with,” he pointed. “And I’ve been very lucky with both,” also referring to his ‘Disenchanted’ co-star Amy Adams. “They are amazing at what they do and it makes your job so much easier. because all you have to do is be there and listen and play with them,” Dempsey continued.

“And that’s been something that I’ve really enjoyed and I’m very grateful to have had the opportunity to work with both of them.” With these statements in favor of Pompeo (it is seen that they have buried the hatchet from a few years ago), We cannot rule out that there is nothing in the head of some ‘showrunner’, but at the moment, there is nothing in development.

What is true in the rumors that there will be a new series with Ellen Pompeo and Patrick Dempsey?