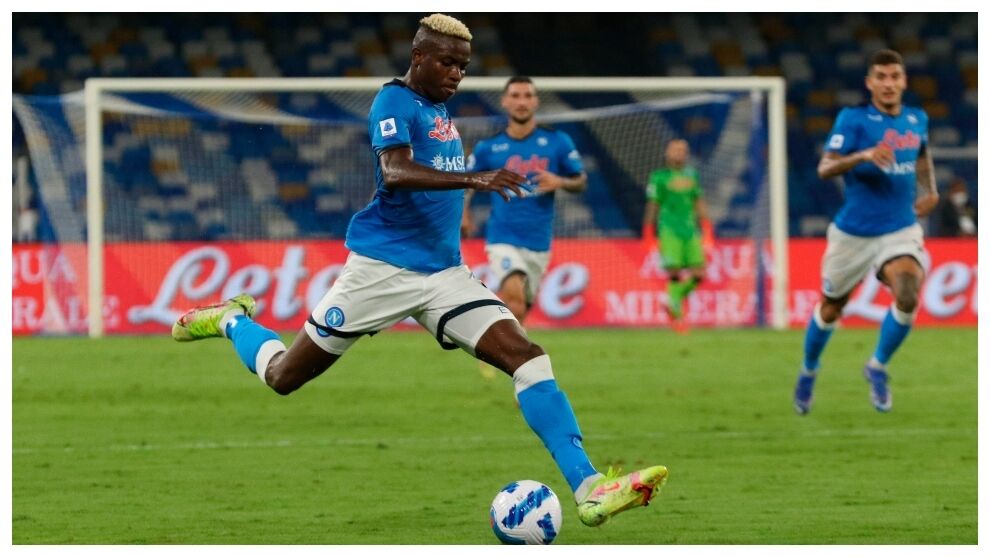 The departure of Cristiano Ronaldo and Romelu Lukaku has left a void in Serie A that Victor James Osimhen (Lagos, 1998) tries to fill.“His physical strength makes him a devastating player. He is the heir to Lukaku”, assures Gianfranco Zola to refer to the most expensive signing (70 million) in the history of Naples.

His physical strength makes him a devastating player. He is the heir to L

His first season in the ‘old’ San Paolo, weighed down by a shoulder injury, was not excellent. Still, he scored 10 goals in 1,866 minutes.

Now, however, there is no one to stop him. ‘Osi’ has six goals -four in the League- and an assist in six games.

A streak to try to extend in the UEFA Europa League against Spartak Moscow.

His path to the elite begins in Olusosun, the largest landfill in Africa. “Sell bags of water to the workers to eat the next day,” he confesses.

Among the remains he found his first boots. “Sometimes I would find an old Adidas for the right foot … and a Reebok for the left. I saw it as a game, but it was pure survival.”

Sometimes I found [en el vertedero] an old Adidas for the right foot … and a Reebok for the left. I saw it as a game, but it was pure survival

Wolfsburg signed him when he was just 16 years old.

“He was very young. He was coming out of the World Cup. In training he pointed out some brutal characteristics: he was fast, skilled, a fighter … Very complete.

He lacked the maturity that he achieved in Belgium and the confidence of a technician who would bet on him so that all that would come to light, “his ex-partner Ignacio Camacho told MARCA.

In training he pointed out some brutal characteristics: he was fast, skilled, a fighter … Very complete

From Charleroi to ‘heaven’

In Wolfsburg he played 16 games, but did not score and left on loan to Charleroi.

“It was a particular case. It arrived after being discarded by Brujas”, recalls Javi Martos,

now in the ranks of AE Prat. “Technically he was not very fine because he is very tall and has big feet,

but he had great confidence that he was going to be a ‘top’ player.

He spent the day watching videos of Cristiano, Messi … and if he had to apply himself 50 times in a control or in a hit, he did it. ”

He had great confidence that he was going to be a ‘top’ player. He spent the day watching videos of Cristiano, Messi …

The ‘repetitions’ paid off:

“He has improved a lot in the definition. Before he had eight chances and I will give you one or none. It is true that of those eight, four were generated by himself.

I played center-back and I remember that you sent him a long ball, he controlled his chest, spread his arms and went between centers. It measures 1.90, but has a flexibility beyond the reach of the rest. Lecanta the foot at the height of the head, ‘a la Ibra’ “. But Martos highlights another ‘tem’ above the rest:” It has been rising in level and it does in Italy or in France, against ‘top’ rivals, the same as he did in Belgium.

Who would you compare it to? He reminds me of Drogba because of his power in the race and when it comes to finishing “

He bought the Charleroi for 3.5 million and sold it to Lille for 22 kilos. In the ranks of the ‘dogos’ he coincided with Pedro Gmez

: “I remember he came from the African Cup and we had organized a regenerative introductory plan for him. We were in the office with the master (Galtier) and the sports director (Luis Campos) and

He put so much effort on us that he was ready to play that we agreed and on the fifth day he scored two goals. ”

“I love it. He reminds me of Eto’o, saving the distances. He’s fast, the space is good, he reads the unmarkings well … and he’s very aggressive.

It conveys a great ambition, contagious, when it comes to pressing. He is capable of repeating ‘sprints’ constantly. He was the leader of Lille in that section “, points out the Spanish physical trainer.

Love it. It reminds me of Eto’o, saving the distance. It is fast, the space is good, it reads the unchecks well … and it is very aggressive.

However, Pedro Gmez believes that it has still peaked:

“When he arrived at Lille he had technical and tactical limitations, but he has the potential to make the leap to an even more ‘top’ team.

As he progresses, he will go to better teams and have better coaches to help him polish certain aspects. “