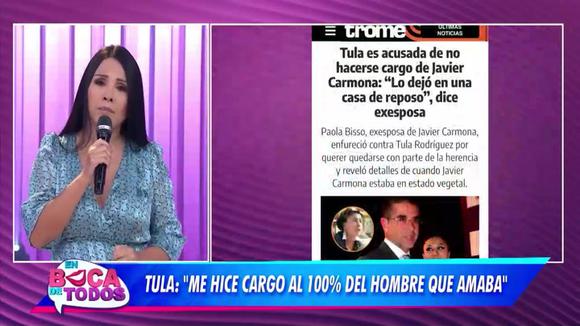 HOW STRONG. tula rodriguez headed to Magaly Medina during his live show on ‘En Boca de Todos’ to ask him not to give a screen to the first wife of Javier Carmona, Paola Bisso, who accuses her of wanting to keep 50% of the inheritance of the deceased television manager.

READ ALSO: Magaly ‘explodes’ against Tula Rodríguez: “You whimper and victimize yourself so that the country says ‘poor thing'”

“If I have to bow my head and ask Magaly, please, I’m not ashamedbecause if this is going to help calm my daughter’s pain a little, I’m going to do it, Magaly, please stop, you have no idea how I am going backwards or what this situation has caused yesterday in my daughter. She is already 13 years old and is at the most complicated age where she has all her emotions altered today, you have no idea how hard it has been for me to work so that she is well, “she said.

With a broken voice and in the middle of crying, The former vedette assured that her daughter is still a minor and continues to be affected because “she also lost a father”.

“We have to be aware to whom we are giving a screen to talk like that, if they have the real morals to talk like that. Today Valentina is not having a good time, I have no choice but to tell you that I love you, that this is one more stone on the road, you and I know the truth, the two of us come together to join forces, “she added.

TULA ACCEPTS THAT CARMONA WAS IN A RESTING HOME

At another point in his statement, Tula Rodríguez accepted that her husband Javier Carmona was sent to a rest center due to his vegetable state, but assured that it was agreed with the whole family. In addition, she clarified that she was always by his side visiting him.

“Later, with the decision of the family, we put him in a center where he was cared for in a spectacular way.when the pandemic came we decided to bring him to my house to be able to take care of him, to have him with me, where I took 100% charge of the man I loved. I had to hire someone to help me because he had very high needs, when he left, he left clean, without a sore because I took care of him as it should be and God gave me that blessing that that man dies in my arms and I accompanied him until his last breath”, he added.

READ ALSO: Tula breaks her silence about Carmona’s inheritance: “I can’t force my daughter to resign”

Magaly Medina responded to Tula Rodríguezwho had asked him to stop, in reference to the testimony of the mother of Javier Carmona’s children, issued the day before. “You cry and victimize yourself so that an entire country says Magaly is bad, poor Tula”answered the popular “Magpie”.

Magaly began her program by responding to Tula for the message she addressed to her on the En Boca de Todos program. “If she asks me that enough is enough, I think that Carmona’s children are asking you to comply with something that you have not fulfilled for a long time (a procedure)”, he stated.

“You go out and complain, you whimper and you victimize yourself so that the whole country says ‘the bad Magaly is like that and poor little Tula‘”, he added.

Tula Rodríguez cries and begs Magaly Medina: “Stop, please, you have no idea of ​​my daughter’s pain”