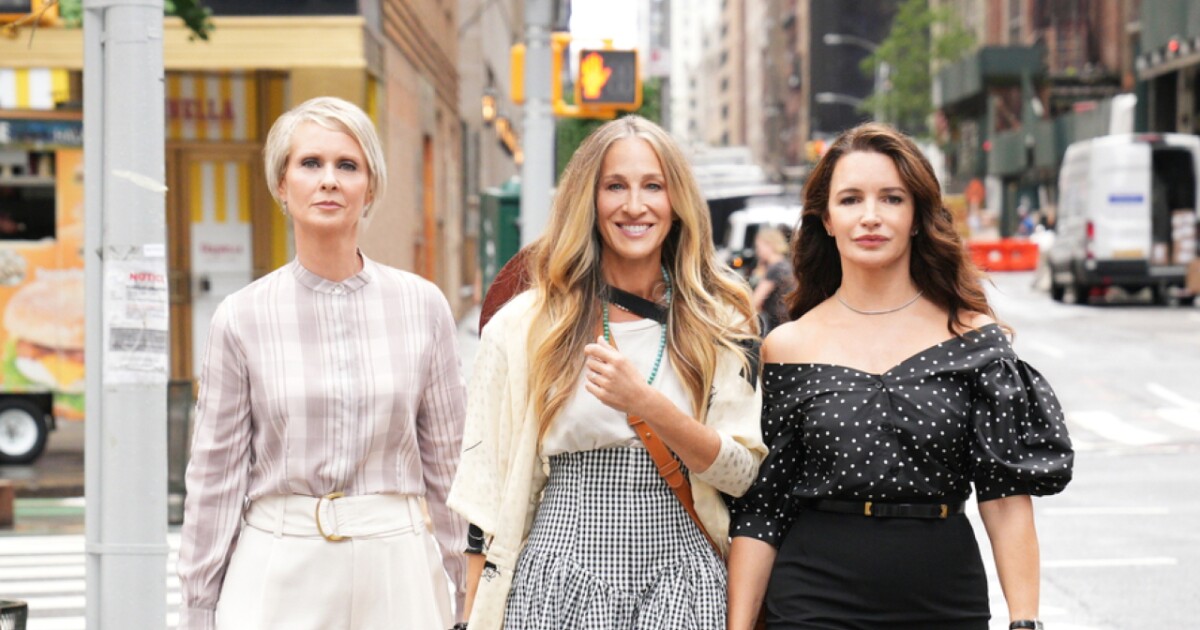 It recently premiered on the HBO Max platform. The series serves as a sequel to the remembered one , which originally aired between 1998 and 2004.

Sex and The City It was a pioneer in speaking openly about female sexuality, although it was also criticized for its lack of diversity. Actress Kristin Davis, who plays Charlotte York, revealed what it feels like to return to one of her most remembered characters.

How does it feel to bring Charlotte back?

It feels good. But its a lot. It’s interesting because no other job you do is like this particular job. The feelings that people have about these characters and the energy they generate is amazing. So, I lost my voice at some point in all of this! But is fun. Its alot. There really is no other way to put it.

People have such deep feelings about it, and you forget, because we’ve been in the bubble, working for quite a long time. Then you come back out and you’re like, wow, “I forgot about the intensity.” But of course it is amazing and wonderful that it exists.

Can you tell us a little about where Charlotte is now?

Charlotte is where we left her: she is still happily married to Harry and has their two children, and they have all grown up. The main problems Charlotte will face have to do with being in this world right now, at this time of cultural change, and How are you going to deal with it? How are you going to handle that?

And then parenting as well because you never know what your children are going to bring: what they are going to face as themselves and what they will bring to you to face it. That’s true for everyone, and it will definitely be true for Charlotte.

What do you feel the show is saying to women now compared to the original show?

The series is broader now, in terms of themes. And that also reflects life. We are now 50 years old, instead of 30, and life gets complicated when you are older. You are responsible for people and families and a multitude of things. We are living in an interesting time of change, and we wanted to reflect that in the program. And I think we do.

As for the scripts, our writers and the things we choose to put in. We try to include a lot of the cultural issues that everyone is dealing with and try to see how our characters deal with it.

The show tackles uncomfortable topics that people don’t like to talk about, like when Charlotte is feeling anxious because LTW and her husband are the only black couple at her dinner …

That is a perfect example. And that was one that we were very concerned about and that we worked very hard on. It was written by one of our new writers, Keli Goff, who is great. LTW is such a fascinating character. And, if we go back, which I really hope we do, there is so much of it that we haven’t fully explored. She is a documentarian, she is a mother, she is an art collector. She has many aspirations for Charlotte.

So we’re seeing Charlotte trying so hard to be her perfect self, but not really understanding how to be her perfect self in that situation. When in reality, in the end, it’s just two friends, who get together and talk honestly about the issues. Simply I loved it. I thought it was awesome. I hope people identify with him.

That is what Sex and the City has always done: portray the things that people think about but don’t necessarily say out loud. Although there was retrospective criticism of the original series for not being diverse. How do you feel now looking back at previous episodes?

Well, I would never look back if it weren’t for Instagram showing them to me, or parts of them! But yes, of course, there were very valid criticisms from all of us, who were doing TV. Historically, it hasn’t reflected true life in terms of diversity, be it economic diversity, racial diversity, religious diversity, none of that really.

So I think that’s one of the joys of getting back with And Just Like That … We are really trying to make a program that is based on the reality that we are all possibly becoming aware of. And having to struggle with the best way to communicate it. Sometimes it’s hard to know: is it safe to say this here? Will it be difficult if I mention this? There are so many of those problems now, and I love that our characters are open and that so many things evolve that you may not see coming.

How has the writers room changed?

Well, we have these wonderful new writers. We also have Elisa Zuritsky and Julie Rottenberg, who were with us before. Of course, Michael Patrick King is our executive producer, writer, director … so he’s largely in charge of the overall vision. And then he added only the most amazing writers. We have Rachna Fruchbom, Samantha Irby, and Keli Goff. And our directors were all women, except for Michael Patrick King. They are all so different and have different backgrounds, and their careers have been different. Michael Patrick King was a stand-up before becoming a television showrunner and screenwriter. And he always has the comedy part, and then he has the bigger vision.

Then they can fill it in with their own day-to-day experiences, because he’s still a white man and none of them are. And then we have the new actresses who come in with incredible talent and really incredible opinions as well, and having their input has been really fascinating. So, it is a rich tapestry.

We are not necessarily trying to figure anything out, we just open the door to have that conversation. Which is really what we did with the old series when you think about it … We never said ‘this is what you should do’, we said ‘hey, let’s talk about it’. It is so, but with these things broader cultural problems.

The original series dealt with serious topics, like cancer and infertility, but always with a light touch. How do you strike that balance, where it’s a comedy but deals with these big issues?

It is not easy, as you can see from the reactions of some people. I understand, obviously, that people are going to have a lot of feelings. But I also feel like, in the past, we dealt with very serious things. And people forget it. It’s interesting to see what they remember from the previous show. Being older, we all have personally, that is, the writers and the actors and Michael and all of us, we have all been through life. Life happens around us, right?

The world has gone through a pandemic: Many things have happened that are serious and it is important to be able to reflect that in what we are doing. And also hopefully being able to have a way of talking about it, and maybe laughing about it. It doesn’t always have to be fun. But I know for myself, this is how I feel when I see it. Especially when I see the stories of the other characters. It’s amazing, I always feel sorry for them.

It’s true what you say about how people remember the above show because if they haven’t seen it in a long time, they think it’s just about sex, clothes, and shoes. But it was much more than that.

It is very, very interesting. And people symbolize you in some way, as if they condensed you in a certain box. When, if you really look back, it was more complicated than that. But that’s how culture and entertainment are.

It’s amazing. I mean, I was a little nervous. I spoke with Michael Patrick King, maybe six weeks before starting. And we’d already talked about the stories and everything, but we hadn’t talked about the style, the hair, and the details of what I had to do to get ready. And he said to me: “No, don’t change anything.”

I was like, ‘Nothing?’ But he said, ‘Charlotte is one of those women where her hair would be the same.’ And that is true. So the challenge was, well, we’re here now, we’re not here then. So some things have to change subtly. But he really loved me … because the other characters go through some pretty fundamental changes. So, I didn’t want my appearance to necessarily change. Which, on the one hand, made me really relieved because I love Charlotte’s look. But on the other hand, I was like, oh, I have to wear those tight-waisted clothes again.

But luckily we had Molly Rogers, whom we’ve known forever, who was Pat’s right hand man. [Patricia Field]. And I couldn’t love a human being more. And Danny Santiago, who was always there for us with the harvest. That is their specialty. And belts. Let me tell you: if you need a belt, Danny is the man! So yeah, when I found out we had them, along with us, it was a joy. And just to go back to the fitting room. They made it so special with the lights and everything, I don’t know if you’ve seen it on Instagram but, I mean, it’s not normal. Let me tell you, this is not at all what normal testers look like. Creativity is so special and so much fun. It’s the next level!

“The series is broader now”: Kristin Davis (Charlotte) on the new ‘Sex and the City’.