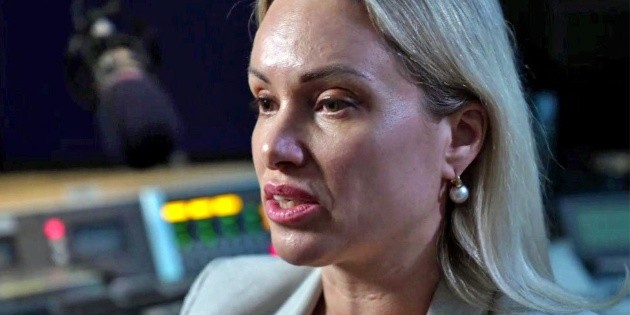 His image breaking into the middle of a Russian news broadcast, carrying a banner against the war, went around the world.

The protagonist was Marina Ovyannikova, a Russian journalist who claims that her people are “zombified” by Kremlin propaganda.

Ovsyannikova was interviewed by the BBC and says Russians should stop listening to state-controlled media coverage.

“I understand that it is very difficult … to seek alternative information, but you need to go for it,” the journalist said.

“I wanted to show that some Russians are against the war”

Ovsyannikova, editor of the state-owned Channel 1, was arrested after her protest on Monday.

He appeared on camera on one of Russia’s most-watched news shows, Vremya, holding a banner that read: “No war, stop the war. Don’t believe the propaganda, they are lying to you here.”

He was also heard repeating the same words: “no war, stop the war.”

“I was aware that if I protested in the central square (in Moscow), I would have been arrested like everyone elsethrown into a caravan and put on trial,” Ovsyannikova said Thursday.

“Half of the banner was in Russian, the other half in English. I really wanted to show the Western audience that some Russians are against the war,” he added.

“Of course I feel that I carry some responsibility. I was an ordinary cog in the propaganda machine. Until the last moment I didn’t think much about it,” he said.

Ovsyannikova also responded to various allegations in Russian media about the reasons for her protest: “There are many conspiracy theories about me.”

“That’s why I had to explain to the world what was really going on, the fact that I’m a normal Russian woman, but I couldn’t stay on the sidelines.”

Against the official version

Before her protest on television, Ovsyannikova had recorded a video saying she was ashamed to work for “Kremlin propaganda”.

The journalist claims to have been detained and questioned by the police for 14 hours, and fined 30,000 rubles ($280) for that video.

The authorities were convinced that Ovsyannikova was acting on behalf of someone else, the journalist says.

“Nobody believed that it was my personal decision. They suggested whether it could be a conflict at work, relatives who were unhappy about Ukraine or that I was doing it for the special services of the West.”

“They couldn’t believe he had so many objections against the government to keep quiet.

Russian state television has long been controlled by the Kremlin and independent viewpoints are rare on the main channels.

It is also unusual for employees of state-run news organizations to express opinions that differ from the official Kremlin position.

However, since the war in Ukraine began, a journalist numbers has resigned from some of the major Russian TV channels: Zhanna Agalakova from Channel 1 and Lilia Gildeyeva and Vadim Glusker from NTV.

Russian state media refer to the war as a “special military operation” and paint Ukraine as the aggressor, describing its elected government as neo-Nazi.

“The Russians are ‘zombified’ by propaganda”: Marina Ovsyannikova, the Russian journalist who challenged the Kremlin on television