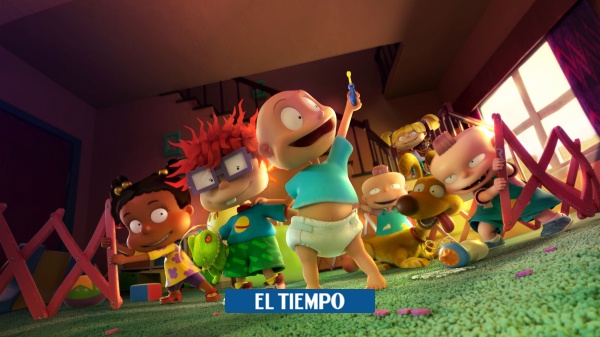 “It’s cool that you have an Xbox, but it’s great that you can play with a shoebox and believe it could be a ship or a ship,” says Mexican voice actress Laura Torres, who voices Tommy Pickles in Spanish. in the series Rugrats (also known as Rugrats).

This reflection connects very well with the series of Nickelodeon which premiered in 1991 and was extended to 2004 in 172 episodes and now returns, starting today, on the streaming platform Paramount+.

Considered one of the most interesting animated productions, and above all groundbreaking in many aspects related to visual style and narrative compared to other children’s spaces, Rugrats showed the life and the great little adventures of a group of babies who met during visits from his parents.

In those encounters, the power of friendship, fears and frames of reference of the little protagonists in terms of their personality and their relationship with the family were revealed. That made it a cult piece among the little ones who hallucinated with the tenderness and the traits of the characters, while the older ones could identify situations and messages that connected well with their role as parents or siblings.

This was the animation of the series in its previous stage.

A winning combo in times when The Simpson they came to cause a revolution in other audiences (it should be remembered that the English version of Rugrats features the actress Nancy Cartwright, famous for being the voice of Bart) and SpongeBob, who was the one who took the throne from Rugrats on Nickelodeon, had not yet appeared.

But the truth is that the portrait of adventurous children who faced a bit of an almost harmless evil and a very natural goodness was something new, unlike any other animation project at the time.

Therefore, now that a new version is released, it is worth wondering if this recipe has a new flavor or plays to be repeated.

“Of course there are new things. Look, before there was not so much yoga, nor was there much talk about parents’ relationships, telephones; children are suddenly entertained with a tablet. Just as the cartoon has changed, all that technology is appropriate to our times ”, responds Lili Barba, who lends her voice in Spanish to the character of Carlitos: the fearful two-year-old boy and the best friend of the rebel Tommy.

You may be interested in: ‘Scenes from a Marriage’: the series that reveals the miseries of marriage.

“The story enters by itself and you do not have to explain anything”Adds Torres. The discoveries, the little frustrations and the triumphs of teamwork are back.
“What children experience is a part of the great message of this series, which is linked to entertaining and rescuing family love. What happens is that now it is a family where there are many lifestyles and preferences in all aspects ”, he says.

Perhaps one of those that can attract the most attention is that, in this new version, which among other things bets on an animation with greater texture and close to the 3D image, it is revealed that Betty (the mother of little twins Phil and Lili) she is a lesbian.

“Yes, it will generate controversy because we are judgmental. But I cannot say that this is something current and that we must respect it, because it is a preference and that does not make you worse or worse. Treat me with respect and you will receive the same, even if you are vegan, carnivore, homosexual, tripartite. Rugrats breaks with structures again, but playing it with such delicacy and seriousness that we can only say: ‘My respects’ ”, explains Laura Torres.

“We are showing a reality that we live in, and it is none other than that we must all live with love and respect,” says Lili Barba.

But, beyond discussions, the series has the great challenge of attracting the new generations of the children’s audience. Two decades have passed since the original program, and gaining the attention of that audience is going to be the most interesting thing about this meeting.

“We didn’t stop laughing when we were recording, because it is beautifully made; the little ones are going to love the animation, the teenagers are going to be reflected in some elements of the new version and the parents are going to die of love when they remember those old times “, says Barba, before giving way to his dubbing adventure partner Laura, who sums it up in a more emotional way.

“Each of us who participated in this adventure have done it with a lot of love. When you do something without love, it shows, but I feel that, if once we were able to go through something as cold as a screen, and if we have managed to touch the hearts of so many people, believe that we are going to do it again ”, he concludes .