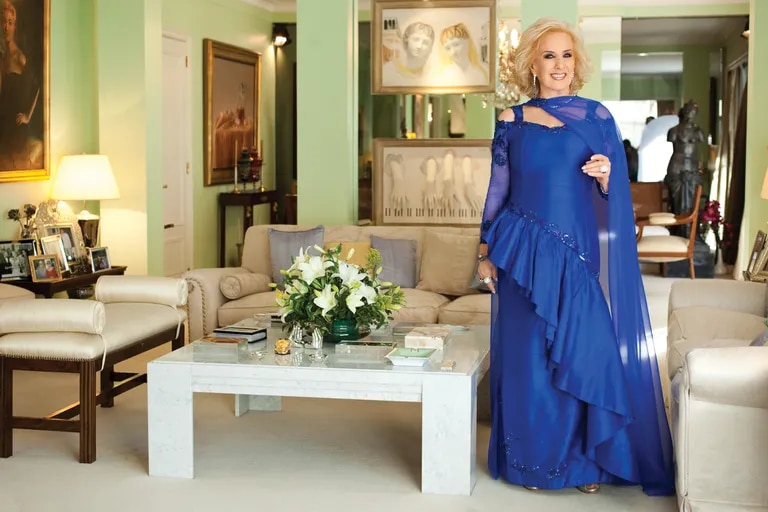 Marina Calabro gave some indications of what may be the television pass of the year. In dialogue with Florencia de la V and the panelists from Intruders in the Showby America TV, He said that in that same signal they confirmed that there is an offer standing: they want Mirtha Legrand to do specials once a month.

“How many surprises this year? You have neighbors. And there will be more neighbors. Is Mirtha going to America?the journalist introduced the subject when Florencia de la V asked her about the current affairs of the entertainment world. “Very good. You took the word out of my mouth”the driver replied, and agreed with Marcela Tauro about the rumors that Mirta Legrand would leave the thirteen to make a program America TV.

Calabró confessed that he was investigating because Jorge Lanata asked him for more information on the subject “And someone, a high-ranking source from America that I’m not going to mention, told me ‘look, the contact is not down'”. Later, he revealed that what they told him is that there is a chance to propose to Mirtha and formalize her offer to do specials once a month. “That eltrece does not fall asleep because America is like this”he assured, and accompanied the explanation with the gesture of a lion on the prowl.

When Daniel Ambrosino added that Juana Viale could also reach America TV Calabró made a gesture of doubtand when Nancy Duré asked her how her relationship with the great TV diva was, the journalist was very clear: “Like the monkey”, revealed, and asked the panel to intercede because it is still blocked by Legrand. Then she claimed that Juan Carlos Calabro had intervened in the conflict and ruled out that Coca helps her because she “is for Mirtha.”

Before presenting the mobile with Marina Calabró, on the flat of intruders they counted the family drama of his sister, the actress Ileana Calabró: because of the pandemic, and then because of labor issues, She has not seen her son Nicolás, who lives in Brazil, for three years.

The desire to hug him and the need to chat with him have colored Ileana’s life with sadness lately. However, that sadness has its days numbered: Nicolás will come to visit Argentina.

“Ileana is super excited about Nico’s visit, about being able to spend these days in Córdoba”acknowledged her sister, and also stressed that the stoppage is going to suit her very well because she is a hard worker, lives loaded with work and has not rested for a long time. “She always thinks that she is going to be out of a job, that the twine, she is always very worried about that”he confessed, and agreed with Florencia de la V in his theory: that the fact of having the children far away helped him to seek non-stop work to keep himself busy.

About love, he cut himself off by saying that he doesn’t know anything because Ileana doesn’t tell him. “I don’t know why a rare question in life has made me famous as an infidente. Fame is unfairhe explained between laughs. “What I feel and talk to her is that she wants to have a love and have a partner,” she said later, and clarified that not a man who completes or supports her, but someone with whom to share life.

The driver, at that time, noted that Ileana “She is not a one night stand woman” and Marina agreed and said that she told her that if she wants to have a “touch & go, at this point in the game and being single, let her do it Who do you have to explain something to?”.

When talking about his present job, Marina Calabró was very happy: every morning she is with Luis Majul and Débora Plager in 8:30AMthe new LN+ space and continue on Lanata without filter. “This year I was blessed to do a current affairs show, an informative segment,” he said of his debut on LN+, adding: “For me it is a professional challenge because I had never done a newscast. Yes, América Noticias with Andino and Mónica Gutiérrez, but I did the entertainment part”.

Asked by Nancy Duré about what her father, Juan Carlos Calabró, might think about his new role, the journalist revealed that he would be very happy and remembered what the comedian told him when he debuted in i love tv: “And what do you know about shows?”. The comedian, her daughter later explained, was convinced that this was not the place for her because, in addition, it had nothing to do with what he had studied: Political Science.

The pass of the year? Mirtha Legrand could land on América TV