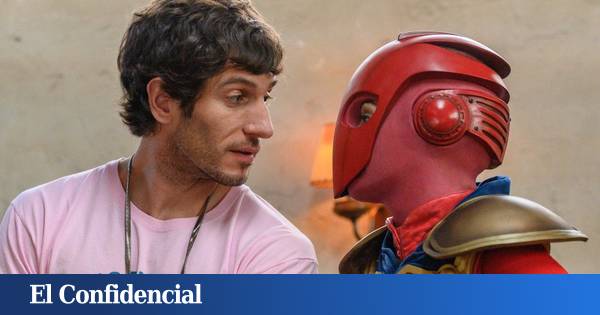 The streaming platforms face the final stretch of the month of May with a battery of premieres, but especially with series returns that we already know. Netflix launches the second and final season of the Spanish comedy ‘The neighbor’, starring Clara Lago and Quim Gutiérrez, as well as a new installment of ‘Master of None’, which changes protagonist after his return four years later.

Another fiction that returns with a renewed aspect is ‘In therapy’ (HBO Spain), the remembered drama that Gabriel Byrne starred more than ten years ago and will now be captained by award-winning actress Uzu Aduba.

Take note of the most prominent titles that you will be able to watch over the next seven days on content on demand (VOD) platforms such as Netflix, HBO Spain, Movistar + or Filmin.

Quim Gutierrez gives life to Titan, a peculiar neighborhood superhero from the comics of Santiago García and the cartoonist Pepo Pérez. The new season, which will be the last, has the special collaboration of Fran Perea, who interprets himself. Perea is commissioned to give life to Titan for a promotional campaign by the Madrid City Council, whose mayor wants the city to become the headquarters of the Olympic Games by exploiting the image of the superhero.

In the cast of the new episodes we find names like Clara Lago, Adrián Pino, Catalina Sopelana, Javier Botet and Gracia Olayo.

After the scandal that splashed Aziz ansari, creator of the acclaimed ‘Master of None’, publicly accused of maintaining inappropriate behavior during a date, those responsible for Netflix have decided to give the leading role to Denise (Lena Waithe) in the third season.

Under the name ‘Moments in Love’, the new episodes show the comings and goings of the relationship between Denise and his wife, Alicia, played by BAFTA winner Naomi Ackie. Despite stepping out of the spotlight, Ansari remains directing and also signs the scripts for the five chapters together with Waithe herself.

One of the most internationally known Norwegian series returns and shares the title with the Marvel Studios film, directed by Taika Waititi. The series takes us into a small town called Edda, whose economic engine is a highly polluting factory dominated by a powerful family of giants, known as the Jutul.

Magne (David Alexander Sjøholt), a teenager who possesses the powers of the god Thor, will have to face the giants to save the planet.

The legendary HBO series that starred Gabriel Byrne and Dianne West more than ten years ago returns with a new protagonist and a renewed style. On this occasion, the Emmy winner Uzo Aduba (‘Mrs. America’, ‘Orange is the New Black’) puts herself in the shoes of the new therapist, Dr. Brooke Taylor.

Each week, HBO will release four episodes to complete the 24 that make up the season. In each installment, we will see a session with a patient, brought to life by interpreters such as Anthony Ramos, Liza Colón-Zayas, John Benjamin Hickey or Quintessa Swindell. Joel Kinnaman is also featured on the series as Brooke’s ex-boyfriend.

The new chapters of this frenzied Australian comedy have arrived, centered on a hit man named Ray Shoesmith. The protagonist combines his controversial work with his responsibilities as a father or the care of his sick brother. The actor Scott ryan he gets into Ray’s skin, in addition to signing the scripts for all the episodes.

Don cheadle, known worldwide for playing War Machine in the films of the Marvel Cinematic Universe, is one of the protagonists of this comedy produced by Seth Rogen. History shows us the events after what is known as ‘Black Monday’ (October 19, 1987), when the worst stock market crash in the history of Wall Street took place.

The series focuses on Maurice ‘Mo’ Monroe (Cheadle), a stockbroker willing to do anything to become relevant in the competitive universe of the New York Stock Exchange. They complete the cast Andrew Rannells like blair pfaff, Regina hall as Dawn Darcy and Paul scheer like Keith Shankar.

The comedians Dan Perlman Y Kevin Iso They give life to a fictionalized version of themselves in this original Showtime comedy that Movistar + premieres exclusively in our country. Both are considered two of the most relevant emerging figures of the so-called ‘stand-up comedy’ in the United States.

In the fiction, they play two friends from the same building who struggle to get out of the routine in the Flatbush neighborhood (Brooklyn), a hitherto marginal area that is beginning to gentrify.

The historian and sociologist Ivan Jablonka wrote three years ago ‘Laëtitia or the end of men’, a detailed account of the terrible sexist crime suffered by an 18-year-old adolescent. The murder, which occurred in the city of Nantes in 2011, shocked French society.

With Jabloka’s work as a guide, the director Jean-Xavier de Lestrade (winner of the Oscar for Best Documentary in 2002) has taken it upon himself to fictionalize the story for the small screen, with actress Marie Colomb stepping into the victim’s shoes.