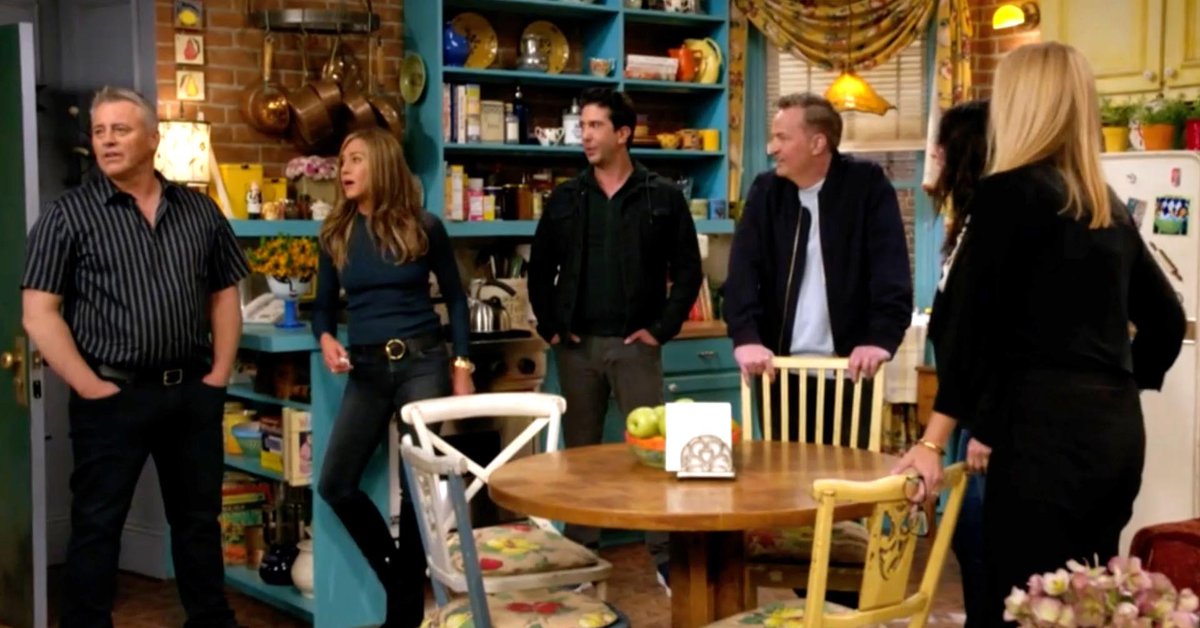 Came the day. Seventeen years have passed since the last episode of Friends, the comic series that broke all records, was released: ten years on the air, six of them being number one, 52 million people watched the last episode live and in these years in those that were not on the air, more than 100 billion times the episodes were repeated throughout the entire planet. There is a generation that grew up with Friends and felt them as their own friends.

The episode of the meeting is a kind of documentary that, like the series, moves between humor and tenderness. But as in all the reunions of friends, there is a lot of nostalgia.

One of the creators of the show explains that the concept of the story was always to tell a period in time in which friends are family, before lives get complicated. These friends were the family of millions of people in the world, who today laugh and move again when they see together again Joey, Monica, Rachel, Ross, Phoebe Y Chandler. Because they are all very famous actors (Matt LeBlanc, Matthew Perry, Courtney Cox, Jennifer Aniston, Lisa Kudrow Y David schwimmer), but on that set in Los Angeles that pretends to be New York, those characters will always be, even if they have gray hair, a few kilos of more or less mobility on their faces from botox.

The most emotional moments of the meeting:

Nostalgia is the common denominator of the hour and 45 minutes of this special made by the HBO network.

One of the first moments in which as spectators we get excited next to the actors occurs when the six count if they have seen each other during all these years, and how special is the relationship between them. If we did not know it yet, or if we did not imagine it, the key to Friends was in the chemistry between the actors who became friends with each other. And that was noticeable in the air. 17 years after the last episode, and 27 years after the first, as an audience we confirm that the series could end but not the relationship between them.

Lisa kudrow He confesses that he is embarrassed to see himself. David schwimmer says he hasn’t seen the show in 17 years. Matt LeBlanc he relates having laughed with his daughter watching old episodes. They all claim to laugh even when they see their colleagues working.

The most anticipated kiss

Another of the emotional moments of the program is when one of the most iconic scenes of the show is reviewed: the first kiss of Ross Y Rachel. Those who have seen Friends surely remember that scene, but seeing it 27 years later from the perspective of the protagonists who return to sit at a work table to read the script again, is a special moment.

Where are the characters today?

The show’s creators made the decision to never relive the stories. Friends has a happy ending for all the leads and the producers didn’t want to spoil that. But on the hypothetical plane, the actors imagine where their characters are today. Spoiler alert: they are still in line with the tone and lived happily ever after with the one that closed the series 17 years ago.

According to its protagonists, Ross Y Rachel they got married and had more children, Chandler Y Monica they keep laughing together, Phoebe she had kids and they were weird like her, and Joey… is still Joey. Matt LeBlanc, actor who gave life to that character, puts the touch of humor in a nostalgic moment – and steals the show at this meeting – by ensuring that he believes that today Joey has a sandwich shop in Los Angeles.

If someone says they didn’t cry when they saw the end of Friends, is a lie. Although it is a comedy, and until the last minute it has humor, leaving behind those 10 years of television history was emotional 17 years ago, and continues to be today.

Friends The Reunion – The End

Unsurprisingly, for those who worked on the series, the ending was overly emotional. The stories are full of nostalgia, but perhaps the greatest achievement of this meeting is to show us those images from behind the scenes, with the genuine tears of those who closed the most important stage of their careers.

In the meeting, as in the series, it is never lost of sight that Friends it’s a comedy. Among so much nostalgia and sensitive moment, very funny fragments stand out.

While the main interview of the meeting takes her forward James corden, at one point a person from the audience asks the actors what part of the show they did not like. Without hesitation, David schwimmer assures that it was working with the monkey Marcel. What follows is a wild account of what happened to the monkey, which Schwimmer takes very seriously, causing laughter from his companions.

YouTube is full of compiled bloopers from Friends. But seeing its protagonists laugh at their own mistakes adds an extra touch.

One of the funniest moments happens when everyone remembers how Matt LeBlanc Y David schwimmer they imitate Matthew Perry in his famous dance.

Friends it was one of the series that featured the best guest actors in history. Since Ben stiller until Julia Roberts, passing through Sean Penn, all have been of the game. And the protagonists of this story fondly remember what it was like to work with these movie glories, and sometimes feel ashamed of them.

The color data, and humor, puts it Schwimmer recounting how ridiculous it felt to have to appear before Sean Penn – his idol – dressed as a potato.

It is not clear if it was a real confession, or a joke by the actors, but Jennifer Aniston There is one fact -not minor- that will generate headlines for weeks: apparently there were romantic feelings between her and David schwimmer 27 years ago.

They tell it with grace, but the touch of humor puts it Matt LeBlanc, when everyone assures that that romance never materialized off the screen, and says he does not believe them.

The Friends special can be seen in much of the world as of today, through the service of streaming from HBO Max. In Latin America, this service will only be available on June 29, therefore, until then you will not be able to see this meeting.

From Lady Gaga to Justin Bieber: This was the participation of the special guests in the Friends meeting
The before and after photos of the cast of Friends