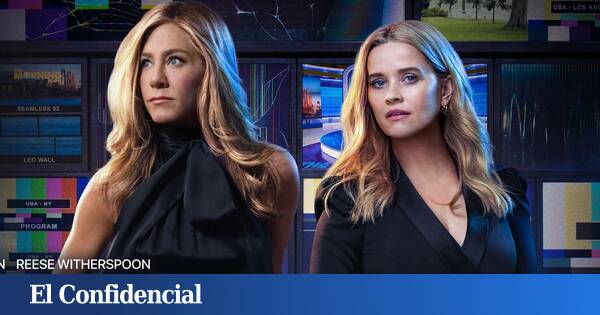 The countdown to the premiere of the second season of ‘The morning show’ has begun. The acclaimed and award-winning series of Apple TV+ returns with another 10 episodes that after the Double premiere on September 17 will be seen weekly every Friday. The entertainment platform has already given many details about the new season.

Starring and produced by Jennifer Anniston and Reese Witherspoon, this fiction focuses on the power dynamics that are generated in the workplace between women and men, and between women themselves. The concrete setting is a successful television morning and everything that is generated between presenters, producers and network and program managers.

So the series goes

The action picks up right after the explosive events of the first season. In this second season, “The Morning Show” team must recover from the destruction caused by Alex’s actions (Jennifer Aniston) and Bradley (Reese Witherspoon), and will witness how both the UBA and the world in general undergo great changes, in which identities play an increasingly important role, and the gulf between how we present ourselves and how we really are is each bigger time.

The cast and additions

They are joined in this second season by the multi-award-winning Julianna Margulies as Laura Peterson, a new informative reporter from the UBA, Greta Lee as Stella Bak, a professional from the technological world who has joined the UBA executive team; Ruairi O’Connor as Ty Fitzgerald, a charismatic and intelligent YouTube star; Hasan Minhaj as Eric Nomani, a new member of the “The Morning Show” crew; Holland Taylor (Emmy winner) as Cybil Richards, the expert chair of the UBA board; Tara Karsian as Gayle Berman, a news producer, and Valeria Golino as Paola Lambruschini, a documentary filmmaker.

This past August 23, Apple TV + launched worldwide the trailer of the new deliveries. The images reveal how this television drama continues:

Apple TV + offers compelling series of all genres, feature films, groundbreaking documentaries and content for the whole family, and you can watch it on any of your screens. Following its global launch on November 1, 2019, Apple TV + became the first exclusively original content streaming service, releasing original titles and starting to receive awards faster than any other streaming service. To date, Apple Originals have received 126 awards and 511 nominations. Apple TV + is available in the Apple TV app in more than 100 countries and for more than 1 billion screens, including iPhone, iPad, Apple TV, iPod touch, Mac, some smart TVs from Samsung, LG, Sony and VIZIO, Amazon Fire TV, Roku, Chromecast with Google TV, Android TV, Playstation consoles and Xbox, and on tv.apple.com, for € 4.99 per month after a 7-day free trial period. For a limited time, users who purchase a new iPhone, iPad, Apple TV, Mac, or iPod touch will be able to enjoy three months of Apple TV + free.