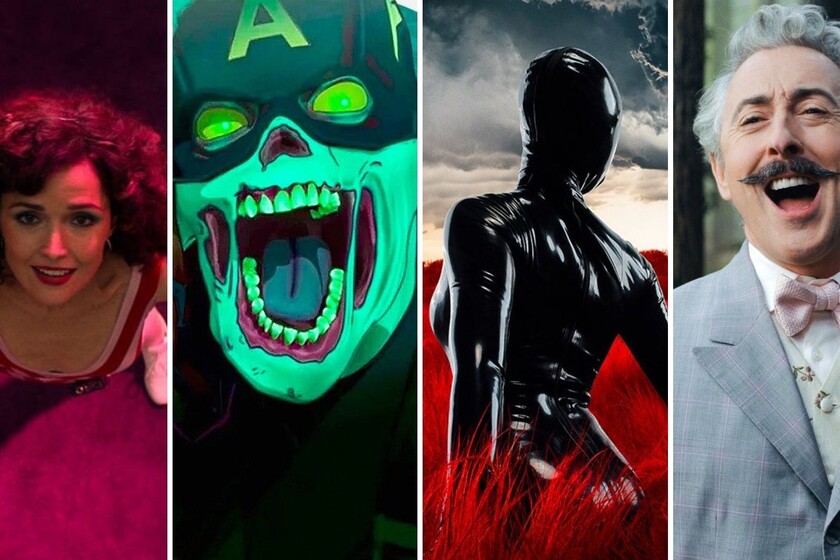 Gone are the times when summer was a time for reruns and filler programming, a mere impasse of waiting before the inauguration of the new season of series and programs. With the consecration of streaming as a new power for the production and diffusion of series, summer is simply … what comes after spring. The grid is still full of top-notch series and the platforms continue to press the accelerator of premieres and new seasons.

And the new platforms, beyond Netflix and HBO, are the ones that tread the hardest. The strange season that we have just lived, with series whose shootings were frozen and premieres were delayed, is beginning to be left behind, and neither Apple TV +, nor Disney +, nor the rest of the relatively newcomers to the competition skimp on audiovisual ammunition. We have selected some of the best series to arrive this summer: some have already started and others will do so in the coming weeks. Not a day without having anything to do with it.

Absolutely stunning visually, this series directed by Pablo Larraín and starring the great Julianne Moore and Clive Owen marks the return of Stephen King to screenwriting, this time adapting one of his most praised books of recent years. You are in time to get on the bandwagon, because all its luxurious and atmospheric episodes have not yet aired, which show that Apple TV + may not have the impact on the networks of its competitors, but the quality of its productions is beyond doubt.

The new MCU series is still taking its first steps, but it is already being revealed as one of the most unclassifiable, and makes it clear that television is for Marvel a way to experiment with tones, narratives and plot lines that support the great plots of the film. Loki’s incarnation as an interdimensional cop who has to fix self-generated mess (or not) gets labyrinthine at times, and Tom Hiddleston and Owen Wilson make up a pair of buddy movie very remarkable.

One of Netflix’s indisputable successes in the last year has been This series stars Omar Sy as a clever fan of the mythical Parisian white-collar thief. Nobody is bitter about a good heist story, and this second part of the first season delves into issues related to the past of our antihero, so it is a more or less essential date.

Craig Gillespie is having a triumphant year, among the very interesting ‘Cruella’ for Disney and this ‘Physical’ that, together with the movie that he introduced to him, ‘Yo, Tonya’, make up a triad of productions about women and what society expects of them full of black humor and bad slobber. Here, with the complicity of a wonderful Rose Byrne, she tells the story of a housewife in the eighties who discovers how aerobics strengthens her self-confidence … among other things.

This atmospheric and haunting series has just premiered its second season, which Movistar + has already confirmed that it will be seen soon on its platform, just as it happened with the first. For now, we can only hope that the crazy tone of the first batch of episodes does not slow down, with its structure of monster-of-the-week and a pair of paranormal investigators (Katja Herbers and Mike Colter) who leave the Warren couple in blankets.

After a fourth season that left many fans somewhat disappointed, the fifth season starts by Rick and Morty keeping the guy with an episode that tastes like the tone and style of the first few seasons. At the moment they are already pointing to changes in the relationships between some characters, but what is clear is that the bad slime and the use of narrative resources of classic science fiction are still there, so … get schwifty!

‘Kevin Can F**k Himself’

If the part that interested you the most of ‘Wandavision‘was the reformulation of the codes of the sitcoms (If what interested you was the usual, good news: Disney + premieres non-stop more MCU series), you have a date with ‘Kevin Can F ** k Himself’ -or as we would like to see it translated: ‘Kevin can go drinking for c ** o‘-. At the moment her arrival in Spain is not scheduled, but I hope we end up watching this AMC series in which Anna Murphy gives life to a housewife who has to put up with an insufferable husband in sitcom format and that, when he disappears, the thing becomes ‘Breaking Bad’.

This series from Lisa Hanawalt, one of the creators of ‘BoJack Horseman’, was canceled by Netflix, but Adult Swim bought the rights to continue it. There is no release date in Spain, although everything indicates that we will see it on HBO at some point in the future, in its splendid section dedicated to animation for adults. We are looking forward to reuniting with Tiffany Haddish and Ali Wong giving voice to the two headlines, in a season that seems to start with Bertie going to a therapist.

The authentic second part of the classic ‘Monsters SA’ arrives in serial format with the first of the Pixar sequels in this format, and that possibly will not be the last. We will follow Sully and Mike (again Santiago Segura and José Mota in the Spanish version), who instead of collecting screams of terror from the children have to collect laughter. The company turns to humor and we will meet new monsters, in a unique investment of the original film which we hope brings with it its good amount of ‘The Office’ style dynamics.

There is still little data on this new incarnation of Ryan Murphy’s success, although the teaser points to a clear aesthetic and tone continuity, with his little song vintage sinisterly, his latex-clad monstrosity and his houses brimming with twilight angles. The novelty is that this time each episode will tell a separate story, something that already worked well in the mother series when it was experimented with the format. Veterans of the series such as Jessica Lange, Sarah Paulson, Kathy Bates, Angela Bassett, Emma Roberts, or Taissa Farmiga have already confirmed their presence. It is not known when or how it will arrive in Spain, but obviously Disney + is an option.

A very peculiar Broadway-style comedy but with a very peculiar meta roll, starring Cecily Strong and Keegan-Michael Key. The series is produced by none other than Hollywood heavyweights Barry Sonnenfeld and Lorne Michaels, making Apple TV + ‘s intent to keep pulling the checkbook so that top-ranked names work for the platform. Here, a couple of hikers arrive in a city, Schmigadoon, where everything is like a musical and where they will not be able to leave until they find true love.

Last summer became one of the undisputed surprise hits of the year: the story of an American football coach who starts work leading a British Premier League football team she was catapulted by the excellent performance of Jason Sudeikis. His incarnation of a somewhat naive but very intelligent character, and more concerned about people than about results, gave a breath of hope to last year with which we hope to meet again this July.

The mythical animated series returns of the eighties with a literal continuation, which starts where that one left off and which, according to what the trailer promises, will be a catalog of all the creatures and places of Eternia, which at that time were used to sell toys and, now, to sell nostalgia. Kevin Smith produces and a cast of stars such as Sarah Michelle Gellar, Lena Headey, Alicia Silverstone and Kevin Conroy play the main characters.

It is not strictly a series, but rather a succession of special episodes closer to the CGI feature films of the franchise. These episodes will be broadcast at a distance from each other to the point that we do not know when the next ones will arrive or how they will be titled, but for now this summer we have the first one, ‘Infinite Darkness’. In it, two classic characters from the saga, Leon S. Kennedy and Claire Redfield, clean up a White House overflowing with zombies in the middle of a blackout that unleashes chaos.

There is still no date for its Spanish premiere – perhaps it will be one of the strong series that HBO Max reserves for its landing in Europe next fall – but it is one of the most anticipated productions of the summer in the United States, a continuation of that teenage soap opera with rich children aired between 2007 and 2012. Kristen Bell returns as an anonymous narrator and there is a whole cast of promising young people who will record how New York City has changed in all these years. Repeats Joshua Safran as screenwriter.

Although the US broadcast will take place on Hulu, this series will not come to us via Disney +, as is usual with the productions of the company’s adult channel, but through Amazon Prime Video, which has bought the international distribution rights. Is about a new Nicole Kidman and David E. Kelley collaboration based on a novel by Liane Moriarty (‘Big Little Lies’). In it, Kidman leads a healing retreat attended by nine strangers with more than one secret in tow.

Created and scripted by Amanda Peet (‘Dirty John’), this scholarly comedy is attracting attention for being the first production of the couple David Benioff and DB Weiss in their millionaire contract with Netflix, although at the moment they are far from the style of the series that made them famous, ‘Game of Thrones’. There are six half-hour episodes in which we will follow Dr. Ji-Yoon Kim (Sandra Oh) in her new position as director of the English department of a fictitious university.

What if Peggy Carter got the Super Soldier Serum? What if a young T’Challa became a Starlord? What if the Marvel Zombies were dropped by the Marvel Universe? To all these questions outside the official continuity and that take place in alternative universes answers this series Disney + animation, initially scheduled for August and with many of the actors in the films returning to their characters. Official aesthetic fanfics cel shading for interdimensional completists of the MCU.