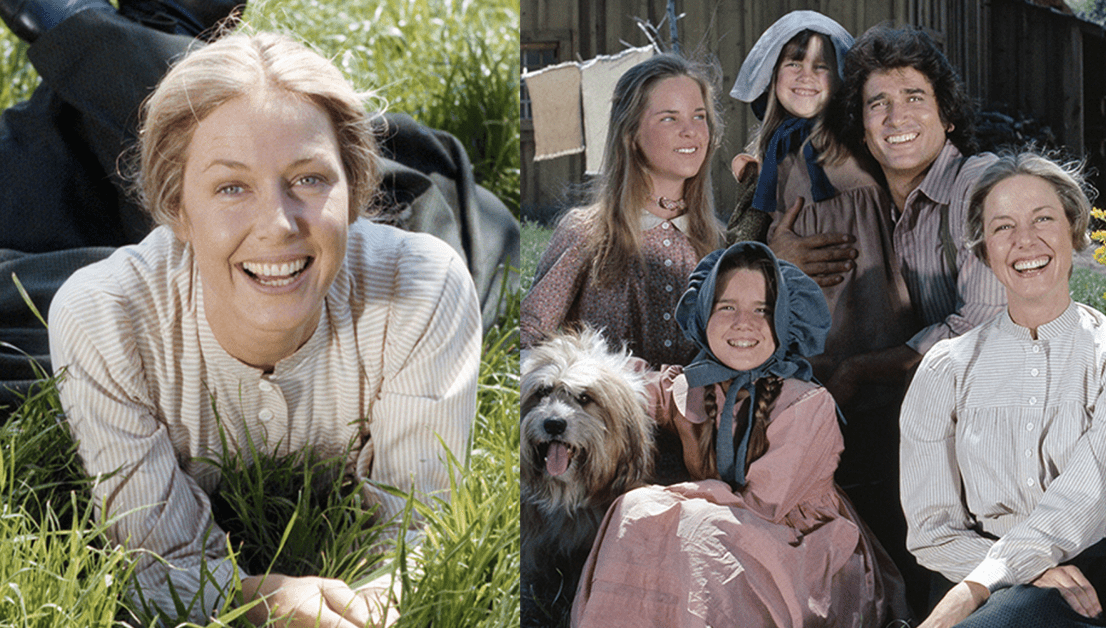 It is more than likely that the name of Karen Grassle it doesn’t sound like anything to you, but your face does. It is seeing a photo of her and instantly recognizing her because she was in charge of playing Caroline Ingalls, the tender, devoted and loving mother of the Ingalls in Little house on the prairie (1974-1983).

Karen was 32 years old when she landed the character in the successful and legendary series repeated ad nauseam on channels around the world for many years. However, his life at that time was not, nor was it, a bed of roses. Not even in the middle of filming the greatest success of his career.

Karen Grassle was always a very reserved actress but it is now, at 79 years old, that she has decided to open up to the world on the channel telling the miseries and hell she suffered throughout her life. In his biography, which he publishes in the US on November 16, he casts off ties and silences to tell his story. Because that woman we saw transmitting candid smiles and maternal tenderness in the television classic, actually lived a personal torment due to alcoholism While the sexism that Michael Landon wasted on set I made things more difficult for him.

“It was a disaster. My life was out of control ” confessed to The Post before the publication of his memoirs. Karen grew up in a home with a college teacher mother who inspired her as a strong woman and role to play, while her father was an alcoholic with suicidal tendencies. And sadly, Karen developed the same self-destructive habit when she was studying.

Karen Gressley was born on February 25, 1942 in California and it was during her stay studying drama at the University of Berkeley that she began to drink more than necessary. He lived in a “hippy” area where he had a tendency to suffer from anxiety and occasionally resorted to self-harm. Upon graduation, he went on a scholarship to a prestigious London academy, to later plant roots in New York with dreams of succeeding in theater. But work was scarce, what she earned in her works was a pittance, every month she worried about having enough money to pay the rent and on top of that she was living a loveless marriage with actor Leon Russom, whom she divorced in 1970.

But then his professional life smiled at him. They told him the possibility of joining a series with a successful actor like Michael Landon, but on the condition that he go to the casting without makeup. Apparently, the actresses who had tried their luck with the role had not convinced the actor by the modern image they showed. And the series, after all, took place between 1870-1890.

Karen was 32 years old and she spent $ 40 (a fortune for her at the time) on a modest wool dress with a high neck and a flared skirt and went to the casting of Little house on the prairie with just a little brown eyeshadow. And after a few minutes of testing he got the job.

The actress gave herself fully to the commitment, “investing a lot of energy in developing relationships ” with the girls who played their daughters with the intention that “feel comfortable doing scenes with me as a mother ”. But her demons still haunted her. And it didn’t help that inside the set they had installed a bar.

“I spent my career drinking, trying to control it. ” he tells the publication, assuring that he wanted to drink like other people do, simply as a means of fun at a party. “But it started to get ugly. I got horribly drunk and cried, cried non-stop. I felt that everything in my life was wrong.

It also didn’t help that he also had a difficult relationship with his partner Michael Landon, who refused to raise his salary after the first season. Karen reveals that the actor began to be rude to her, making sexist and sexual comments in her presence, making fun of her physique and gestures in front of the monitors along with other people on the team. “I felt insulted as his co-star in a hit series ” she claims forty years later, adding that Landon told her that she should charge the same as the children and that, after all, he was not as popular with the public as she thought.

She assures that that situation led to her being left out of plots and scenes, while Landon made jokes “disgusting ” on how “a woman smells after sex ” when they filmed sequences of the couple in the room while “the men employed on the set were cheering him on ”.

Meanwhile, alcohol and hangovers were a constant in his life. In the book She confesses that she used to arrive on set tired and nauseous after spending the night drinking, her eyes red and inflamed, depending on the makeup department to disguise the consequences.

Her alcoholism was so severe that she got drunk at the airport being famous, she continued drinking on the plane aboard first class, kissing a stranger sitting next to her until she agreed to go with him when they landed. He assures that this incident was one of the many that he lived risking his safety under the influence of alcohol. “I don’t know what the public would have thought of Caroline Ingalls’s behavior […] Maybe they would have turned against me ” ponder now.

He adds that he felt “desperate ”, choosing wrong life partners. “I was never a good judge of who would be a good partner ” he explains while adding that he hates confessing it but the men who went through his life “they arrived being a disaster ”. But finally, with the help of a friend, he found the strength to face his problem in 1977, the year he recorded the fourth season. (the series had nine). And with the clarity of sobriety he discovered that his “I wanted to have stability, a husband who wanted a family and children ”.

“I had no idea I wanted what Caroline Ingalls had” sentence in his memoirs. That’s when he got Landon and NBC to double his salary, put bad habits aside, and embraced a healthy lifestyle.

Karen kept working, appeared in episodes of It has written a crime and accompanied Kevin Costner on Wyatt Earp, but never managed to repeat the same success of The house on the prairie. He focused mainly on the theater and his work as an activist. On the one hand, supporting campaigns against domestic violence, but above all in reproductive freedom. After undergoing two abortions – in her late 20s and early 30s before becoming a mother – she decided to support the cause. In her book she recalls, for example, the trauma she suffered when she had to secretly travel to Mexico to perform an abortion legally in 1973. “Society needs to support women in their decisions ” assures. “Either for health reasons – or any personal reason – they should not be treated as criminals ”.

At 79, Karen lives a quiet life in her hometown, Berkeley, California; maintains a close relationship with his partner and daughter of fiction, Melissa Gilbert, and shares her smile on her Instagram profile periodically. I already read about those demons.