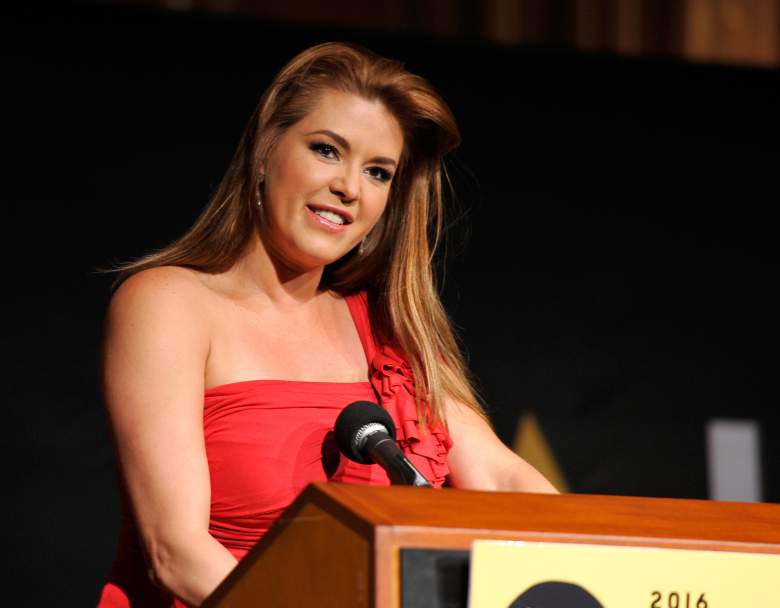 Actress Alicia Machado speaks on stage during the NALIP 2016 Latino Media Awards at Dolby Theater on June 25, 2016 in Hollywood, California.

Come back and play! After Alicia machado left Master Chef Celebrity Colombia, accusing a group of colleagues “The four babys” of discriminatory behavior and xenophobia, and that the singer Marbelle one of “the babys” in turn accused him of inciting prostitution, the former miss The Venezuelan-universe recently starred in a new scandal, this time on the reality show “La casa de los Famosos.”

This television program on the Telemundo network that captures the lives of several celebrities 24 hours a day, seven days a week, while they live in a house without access to the outside world, showed last weekend the embarrassing behaviors of “La Machado” when having drinks during a celebration of the house study.

Alicia’s “La noche loca” spent a day in which the participants put together a “rumba” taking advantage of the fact that they were free, but Machado was carried away by the emotion of the moment, having drinks and stealing the show entirely.

According to the entertainment program Suelta la sopa, after a dinner, Alicia Machado took a moment to talk to her partner Celia Lora, with whom she has not had a good relationship, in order to smooth things over. The model kissed her on the cheek, and made gestures, a situation that caused a moment of sorrow for the famous in front of the other participants of the program.

Later, Alicia takes Celia out to dance, and the most controversial moment happens, and it was recorded on video. Alicia kisses Celia Lora on the mouth. “You are crazier than a goat”, Celia said surprised.

The presenters of the program said that at the ex Miss Universe surely “the tequilitas went up” to his head. But the ex-queen’s show did not stop there, as she then ran to the pool, stripped off her clothes with great joy and jumped into the water totally naked. Nobody follows her game and only Jorge Aravena approaches her to help her out and offer her a towel.

“Alicia got naked… she showed everything, very single and very everything, with her tequilitas. She says that she does not remember, but she threw herself into the pool, she was showing the chichis to everyone “, were several of the comments made by the presenters of ‘Tell me what you know’.

The fights of ‘La Machado’

Since the reality show began at the end of August, Alicia has not bothered to hide her total contempt for Celia Lora, daughter of the singer from The Trim, Alex Lora.

The Venezuelan model pointed out that Celia Lora was a stranger in the United States, where she is recognized as a famous person who has made a renowned career.

“Nobody in the United States knows this old woman, they don’t even know who she is, they know that she is the daughter of a rocker who doesn’t sound there either, by the way, whoops, what a shame”, he commented to Roberto Romano and Uriel del Toro while she was lying on a bed.

From week one, the Telemundo production began to acquire great relevance after rumors began to circulate that Kimberly Flores was cheating on Edwin Luna, vocalist of La Trakaloza de Monterrey, with Roberto Romano.

Alicia, did not hesitate to criticize harshly Kimberly’s performance, of which she said: “It is worth it… She is a married woman with three children, and the husband is hypermegare contrafamous. The lord is from a music guild and they are no fools. What do you go to too and get into his bed? I mean, I haven’t put any of the men to bed “, said the actress and model.

Regarding these comments, Roberto Romano clarified that he would never get involved with Kimberly Flores. And Edwin Luna, did not pay attention to Alicia’s words, and assured in a show program that he wanted his partner to enjoy while his family waited for her.

From love to hate with Romano

It all happened when Christian de la Campa told Roberto that Alicia confessed that he was jealous of her every time she saw them talking. At this Romano laughed to indicate that the statement seemed absurd because there was nothing serious between them. “From the beginning I told him it is not jealousy, I would never be jealous of you, you are free to talk to whoever you want,” he argued.

In addition, the Mexican actor said that he was offended by the Venezuelan’s complaint, and said that he had even told her that the relationship had become tense and that he “could not offer her anything else.”

Thus, after discussions and difficult dialogues, Alicia and Roberto reached a dead end, where the relationship ended.

“All this hurts,” she added through tears. “The only thing I have tried is to do things right.” he dejectedly admitted to the cameras as he tried to pull himself together.

For her part, in a conversation with the Mexican singer Cristina Eustace within the reality show, the former Miss Universe, Alicia Machado confessed to him in the middle of tears:

“I have a year and a half with a depression that I don’t even know how I’m getting out of it. I don’t take anything for that. Yes I am in therapy and it is not controlled. Diseases of the mind are like cancer. I want to be a wife, I want to live that. I would like to get married. I have been a single mother with many difficulties ”.

However, all this drama did not end there, and the story went further. What was a beautiful and fleeting relationship ended in poor condition after Roberto Romano referred to Alicia as a “prickly pear cactus with thorns.”

Roberto’s statements were questioned by “Suelta la Sopa”, whose drivers said that “How was it possible that after Roberto cried with Alicia and said such nice things to her, he would say a phrase like this: ‘I no longer know how to explain to that person (that is, Alicia) who is a prickly pear cactus, and continues to believe that it is a succulent “, said Juan Manuel Cortés, host of the entertainment program.

READ MORE: The US feared that at some point Donald Trump would unleash a nuclear war