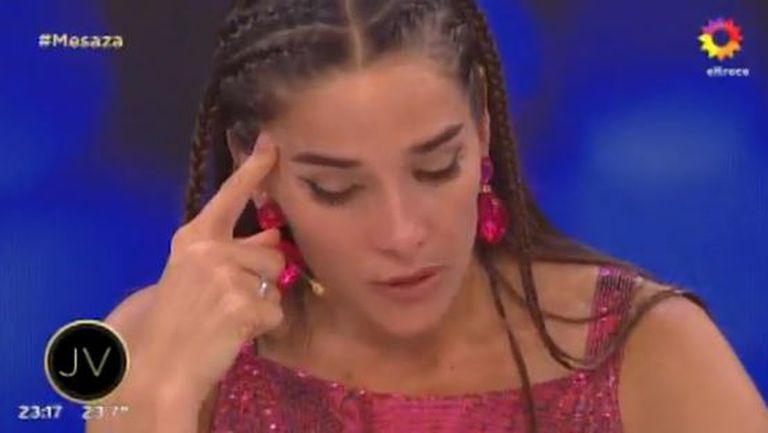 Juana Viale He closed one more year at the head of the most famous table on Argentine television. With ease and great abilities, Mirtha Legrand’s granddaughter took over her grandmother’s program since the pandemic occurred in March 2020 and has won the affection of viewers. On this occasion, he said goodbye to the last night broadcast of The Table of Mirtha, for eltrece, with emotion on the surface. “I am grateful for life”, he expressed, his voice cracking.

Towards the end of the program, the host received some flowers along with a letter from Storylab, the producer headed by her brother Nacho Viale, which she read aloud. “I cry without knowing what it is,” said Juana, moved and began to read the text that reviewed the beginning of her role in the program. “Two years ago we went looking for help in the face of the scourge that the world still lives today. The program had to continue, that was your grandmother’s will. We found the help and today we have a driver in constant evolution and prominence ”, he read, unable to hide his emotion.

Accompanied by the actress Veronica Llinás, to the actor Luciano Cáceres, the designer Mariano Caprarola and the actor and film director Nicolas Stupenengo, the actress continued with the reading: “Your growth fills us with pride and it is deserved. How beautiful the barks are, you are riding ”. The text, signed by the directors Nacho Viale and Diego Palacio and on behalf of all StoryLab, he closed: “Wherever, we will always be together.”

When she finished reading, Juana thanked her for the affection and wanted to dedicate a few words to her farewell. At that moment, Llinás told him: “Your epic, as they say now. Epic”. In the rest of the studio, only applause could be heard. So the driver took a few minutes to thank all of her coworkers. “One is like one more protagonist. None of this can be without my guests, without production, without Jime Cocina [a cargo de Jimena Monteverde], my production team, the technicians and the cameras ”, she expressed, still moved.

And he continued: “My idea … as they say, I fell here as if by magic. I only have words of thanks to all my guests. It is not easy to coordinate schedules and they have done crazy things to be here. I respect everyone, come here and say what you want”.

After mentioning those fundamental people in putting together the program, Juana highlighted: “I am grateful for life, this beautiful cycle ends.” Then, he briefly discussed what his plans are for next year. “What will happen next year? I don’t know, I’m not interested either, because fate is going to let me know”, She said about her future as host of her grandmother’s show.

The emotion of Juana Viale at the end of her program: “I am grateful for life”