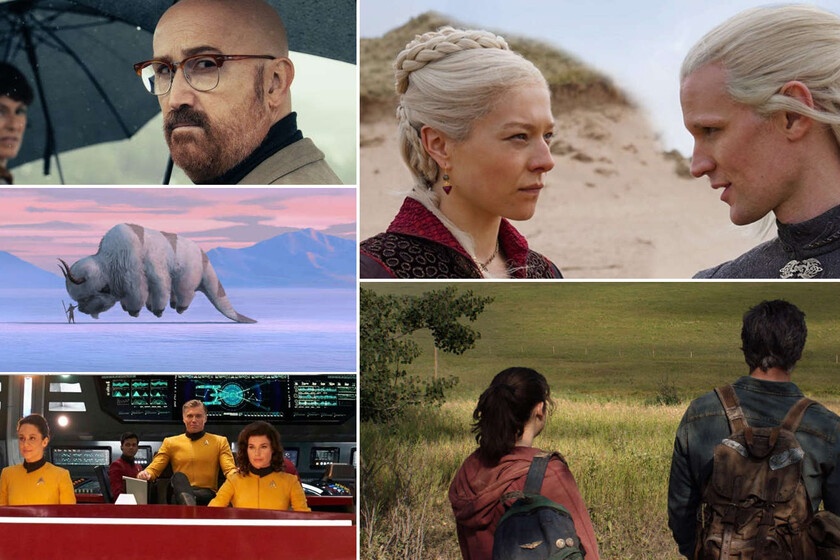 Happy New Year! I hope you all survived New Year’s Eve and, just like Ned Flanders starts filing his income tax return today, we have took out a pencil and paper to review what are the 27 premiere series that we most expect in 2022.

Yes, only premiere series. That is, we do not count the highly anticipated new seasons of ‘Westworld‘, ‘The wonderful Mrs. Maisel‘, ‘The Boys‘ The ‘Euphoria‘, among many other series that will return next year.


I admit I really want Movistar + to broadcast this promising adaptation of José A. Ledo’s podcast. Under the direction of Rodrigo Sorogoyen, Raúl Arévalo, Isa Campo, Alberto Rodríguez and Isaki Lacuesta This anthology proposes individual stories in which we see how society survives after a great solar storm that causes a planetary blackout.


The real image version of one of the great animated series of recent times will arrive this next year on Netflix telling the story of a young twelve-year-old boy capable of mastering the four elements, which will make him the key to achieving peace and balance in the world.

Promises quite the reimagining in dramatic key from the famous Will Smith sitcom. This time it is Jabari Banks who gets into the shoes of this boy from Philadelphia who crosses the entire country to live with his wealthy uncles in the famous Los Angeles neighborhood.

‘The House of the Dragon’

They have been in a relative hurry to bring the spin-off of one of the series so far this century. We return to the universe of ‘Game of Thrones‘ in this spin-off that takes us hundreds of years before the war of the Seven Kingdoms to put us in full domination of the Targaryens on the continent.


The universe of John Wick It expands into a television spin-off that will introduce us to an entirely new hired assassin in its origins. The series will be set in the famous hotel haven in the 70s and will feature Mel Gibson and Colin Woodell, who will play a young Winston.

Julian Fellowes, the creator of ‘Downton Abbey’ moves his period series from Europe to America to take us to the flourishing of New York through the eyes of a young woman who happens to live with her aunts, daughters of old fortune who are on the warpath against its neighbors, the nouveau riche.

Agustín Martínez and Carlos Montero take us on a trip to Andalusia in the 90s in the story of a couple of teenage sisters whose parents suddenly leave the town where they live, leaving a score of corpses in their wake. This will open the door to a hidden world.

Veki Velilla and Francisco Ortiz star in the adaptation of the stupendous comic by Santiago García, which tells the story of a Franco super-agent who is currently returning after years in hibernation just when the country needs him most.

This is going to be the year of several video game adaptations and one of them will be ‘Halo’, the XBOX video game. Pablo Schreiber plays the master chief in a saga that takes us to the 26th century and a conflict between humanity and an alien threat.

‘How I Met Your Father’

The Female version of ‘How I Met Your Mother’ is one of the first releases of this 2022. Hilary Duff stars in this comedy playing Sophie, a single girl who tries to navigate in love in a time of immediacy and dating applications.

‘Interview with a Vampire’


Sam Reid will be in charge of embodying Lestat, the protagonist of the novels by the late Anne Rice, on the small screen in this new adaptation. Not many details are known yet, but the idea is to adapt the entire series of novels, which tells the story of Louise de Pointe du Lac who tells a reporter how she became a vampire.


Pedro Pascal and Bella Ramsay star in the adaptation of ‘The Last Of Us’ for HBO written by none other than Craig Mazin. The story takes us to a post-apocalyptic world in which Joel must take to safety Ellie, a teenager who could soon be the key to finding a cure for the terrible disease that plagues the world.


After exploring more or less unknown characters from the Star Wars universe, Ewan McGregor returns to embody the Jedi master in ‘Obi-Wan Kenobi‘. Deborah Chow directs this series that will be set about ten years after ‘Revenge of the Sith‘. Hayden Christensen as Anakin, Joel Edgerton as Owen Lars and Bonnie Piesse as Beru Lars will make an appearance.


Iñaki Godoy plays Monkey D. Luffy in this live-action adaptation of Eichiro Oda’s huge and beloved adventure manga. ‘One Piece’ follows a young boy with a great dream of becoming the king of the pirates.

Considering it’s probably the best superhero movie of 2022, we’re looking forward to a lot from the spin-off of ‘Suicide squad‘starring John Cena in a look at the origins of the violent character from the hand of James Gunn.

Lily James and Sebastian Stan star in this miniseries that travels to the 90s to talk about the history of the scandalous sex tape of Pamela Anderson and Tommy Lee.


Steve Jones, the legendary Sex Pistols guitarist, is at the center of this series that will follow both Jones and the group in a fascinating new look at these myths of rock history.


The new series of those responsible for ‘Hierro’ (Pepe and Jorge Coira) will arrive in 2022 with Javier Cámara leading the cast. The action takes us to the Galician landscapes of A Capelada, where a frustrated teacher and a civil guard sergeant will go looking for the murderer of the town’s mayor.

Be careful because this may be the most important of the year. Especially if they do it well. Based on the exceptional comic by Neil Gaiman, we follow the story of Sueño, one of the Eternals, who escapes from captivity and tries to bring order to his kingdom. Tom Sturridge stars in series signed by Allan Heinberg


Of course, one of the most anticipated series, I would say, of the decade could not be missing here: the new adaptation of Tolkien’s work It will arrive on September 2 with the desire to revolutionize the panorama of fantasy fiction with a television fiction with an unheard-of budget that will take us to the Second Age of Middle-earth.


2022 can be a pretty nice year for Marvel series and Hulka’s arrival in the MCU. Tatiana Maslany plays a lawyer specializing in superhuman cases who coincides that she is the very cousin of the Hulk. Mark Ruffalo and Tim Roth lead the cast of this comedy.


The new television installment of the trekkie universe is a spin-off of ‘Star Trek: Discovery‘and prequel to the original series that takes us through the Enterprise commanded by Captain Pike (Anson Mount).


Michael Mann and JT Rogers take control of the adaptation of the eponymous book that takes us to the heart of Japan. Ansel Elgort stars as Jake Adelstein, a journalist new to Tokyo who begins to find a grand scheme of corruption in the city’s criminal underworld.


Announced at the recent event of Atresplayer, the return of one of the few series-phenomenon that remained to return is looming. The Carmen Arranz academy reopens its doors on the streaming platform promising new faces alongside some of the iconic characters from the series. Of course, there is still no more information.


His recent announcement It has been one of the most pleasant surprises in recent weeks. Valeria Vegas, Javier Calvo and Javier Ambrossi return to the universe of ‘Poison‘with a continuation / expansion in which we will see the history of transsexuality during the transition.

It has been done to beg but finally in 2022 we will be able to see the long-awaited sequel to ‘Vikings’. A new series that will take us through some of the best-known Vikings of the post-Ragnar era: Leif Eriksson, Freydis Eriksdotter, Harald Hardrada or William the Conqueror, among others.

‘The Witcher: the origin of blood’

The spin-off of the Netflix video game adaptation takes us more than a millennium before the events of the series starring Henry Cavill. This is the story of how the first sorcerer was created and what events brought about the Conjunction of the Spheres.

What are the series that you look forward to the most for this new year?

The 27 most anticipated series premiere of 2022