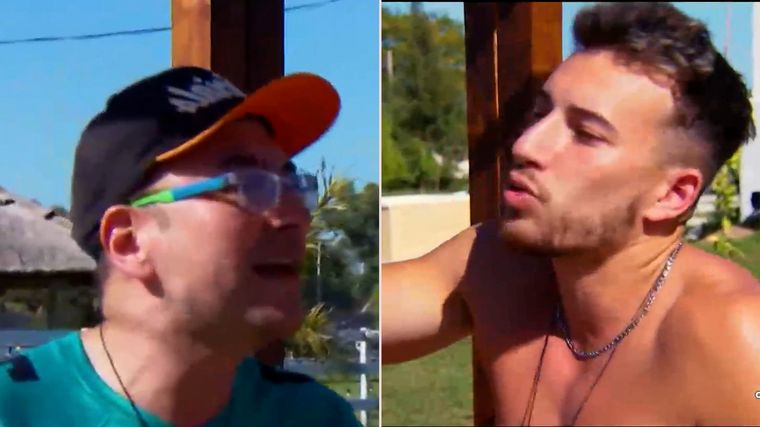 Leo García and Martín Salwe sparks were being drawn from the beginning of the reality show and, finally, everything exploded this Thursday, when a few things were said before their companions and they had to intervene.

It all started in the first meeting during the wheel of truth, when Pampita asked the musician about his “carnal desire”. Bluntly, the artist replied: “I like Martín. He is very sexual, he gets into everyone’s bed, but not mine, because he is afraid of me”.

The thing did not stop there, and Leo deepened: “He told me he wanted to make love to me one night.” “I said it as a joke. What’s more, I don’t record the specific moment, I said it very lightly, ”Martin defended himself backstage.

Later they had some friction during the coexistence in the hotel, but the tensions seemed to have loosened. However, García continued to target his partner, treating him as homophobic.

Finally, on Thursday Pampita brought the participants together to explain the nomination system, but before that, García and Salwe crossed paths again.

“I have nothing against him, I feel like he got confused with me. I made a mistake and I think he misunderstood it. He took me to a horrible, ugly place. I made a joke in passing, apologized, closed the topic. I have respect or affection for him, but I received a pineapple in the face, a bucket of cold water. I expect his apology, and if not, everything is fine on my part, “said the announcer.

“Pineapple on the face seems like a bad expression to me because we don’t physically attack each other. Instead, I received emotional assaults that did me no good. The distance favors me, I do not like to be with homophobic people, “Garcia replied.

Salwe was not far behind: “It would be good to talk to a professional later, to explain the difference between a person who was confused and apologized to classify a person as homophobic. He is very ugly, ”she said, before the look of the driver and the participants visibly uncomfortable with the situation.

“You have to be careful with what you say. You can’t say the barbarities you say on television. You think that the camera belongs to you all the time and you become an annoying person not only for me, but for a few colleagues,” Garcia added.

“One thing is to compete and another thing is to burn people for life,” argued the former ShowMatch, but the musician remained on his own. “You don’t understand anything,” he replied as his teammates approached to mediate positions. “You are crazy, master,” Salwe blurted out as he walked away.

However, at the time of the vote they showed no rancor and defined a momentary truce.

“I feel like he’s really uncomfortable, and so am I. I do not take it back, what was said is already there, and I want to move on to another topic”, closed the author of “Treasure”, and everything ended in applause.