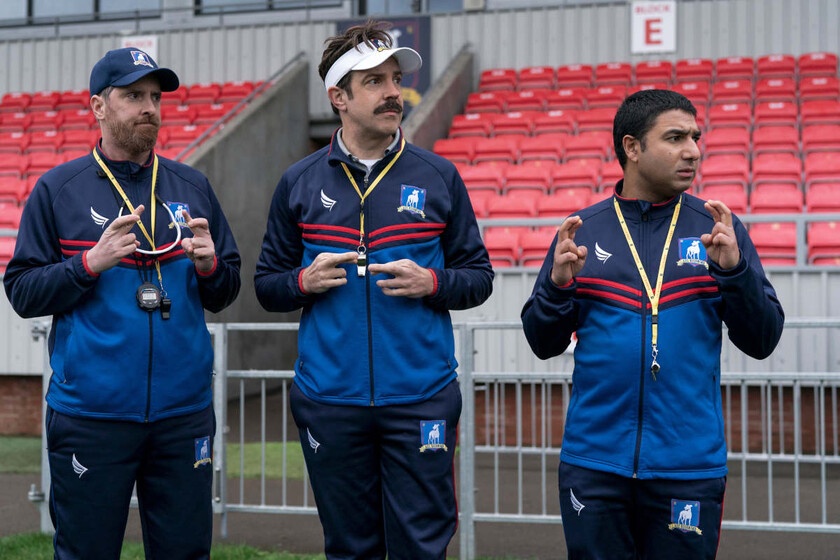 It was one of the great surprises of 2020 and this Friday the 23rd he returns with his season 2 ‘Ted Lasso‘, the football comedy of Apple TV+. With Twenty 2021 Emmy Award Nominations, the expectation for these new episodes, which come to the point for the Olympic Games, it is maximum to see if the magnificent impressions of its debut year are confirmed.

The answer, in short, is yes. Although I still have my pluses and minuses with the strange mix of style that the series proposes, it must be recognized that Jason Sudeikis’s comedy continues to triumph with its particular spirit of improvement and good vibes.

This season 2 (composed of twelve episodes, of which we have been able to see eight) their purpose is clear: ground the person completely that has deactivated the cynicisms of those around him. It’s not easy being Ted Lasso. And more when things are not going as well as we want.

These new episodes begin with Richmond in low hours on a losing streak (Ted’s least favorite result). After an unfortunate incident involving Dani Rojas (Cristo Fernández), the club decides to hire Sharon (Sarah Niles), a sports psychologist who does not end up falling before the charms of our protagonist.

The appearance of this new psychologist it is forming a subplot of these that remain latent until it explodes. Lasso sees a certain threat (disguised as suspicion) in having a psychologist in Richmond because that means, among other things, a failure of the coach’s pedagogy. But also because of the “unmasking” that scratching what is behind it can entail.

The position of positivism, good vibes, altruism, being nice to make a better world works to a certain extent. Situations are more complex than it seems and not everything can be hidden under the rug, under the mask that we wear to work. This second season of ‘Ted Lasso’ is decidedly more introspective, exploring, little by little, inside its characters.

As this introspection occurs, the series by Sudeikis, Bill Lawrence, Brendan Hunt and Joe Kelly broadens its focus by showing us more and more the main components of the Richmond. We have, for example, Rebecca (Hannah Waddinham) returning to the love game and we will explore the life together of Keeley (Juno Temple) and Roy (Brett Goldstein); We even see a dark side to the character played by Nick Mohammed and what causes this.


As always, some subplots perform considerably better than others. Roy Kent’s stories are best when they involve his niece (Elodie Blomfield); there’s also greater intention to develop team players – especially Sam Obisanya (Toheeb Jimoh) – but the result is somewhat erratic.

One of the things that fascinates me most about this season of ‘Ted Lasso’ (or the series in general) is how he is ultra aware of the artifices that they manage to make work both romantic comedies (Lasso considers himself a believer in “rom-communism”) and stories of overcoming in sports and uses them in favor of work. Even when it comes to putting in the relevant cultural references and using tributes to iconic scenes, the series avoids falling into pastiche well.

In short, ‘Ted Lasso’ He is back doing what he does best: having fun and excitement in equal measure in doses of just over half an hour per episode (the eighth, for example, lasts 45 minutes). That tiki-taka that Kiko commented in his review last year is there but the proposal grows in terms of maturing its characters and delving deeper into what moves each member of the football club to which we would like to belong.