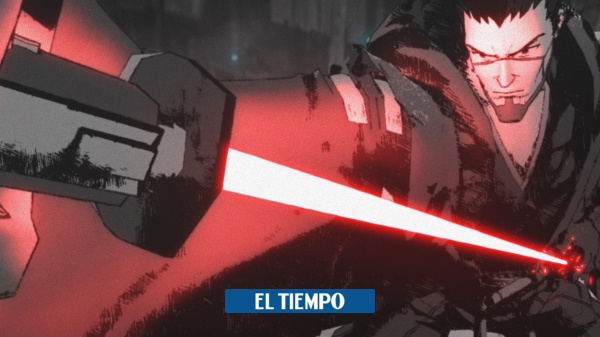 ‘Star Wars’ embrace the mystery and magic of anime in ‘Star Wars: Visions’, an ambitious animated series in Disney+ that crosses the stories of the galactic saga with the essence and unique style of Japanese animation.

“It’s exciting to see all these legendary anime studios tackle a saga as iconic as ‘Star Wars’, “actor Henry Golding, well known in Hollywood for ‘Crazy Rich Asians’ (2019) and who here lends his voice to the English dubbing.

Golding (Betong, Malaysia, 1987) also stressed that not only were those studios allowed to “put their own spin” on ‘Star Wars’ but they were also guaranteed complete freedom to go beyond the canon of the enormous saga devised by George Lucas.

(You may want to read: What book did Hitler read 100 years ago and mysteriously ‘inspire’ him?)

‘Akakiri’, the last short in the series, is the one with the voice of Golding, who was delighted and willing to immerse himself in ‘Star Wars’. “When they brought this up I agreed 100 percent. I mean, who’s stupid enough to say, ‘Oh, let me read the script first …'” he joked.

‘Akakiri’ tells the story of an experienced jedi, Tsubaki, who faces a very dangerous mission to protect her beloved Misa. Golding reflected on the gloomy, tragic tone that permeates each of the frames. “The good does not always win. You know? There are moments in life when darkness conquers good and light,” he said.

The good guy doesn’t always win. You know? There are moments in life when darkness conquers good and light

(You may be interested in: Bond’s Last: Daniel Craig’s Goodbye and a Blockbuster)

The actor also stressed that one of his challenges was to contribute with his voice the sense of honor, loyalty and commitment Absolutes governing Tsubaki’s behavior. “We come across a man who is willing to make the greatest sacrifice for the person he loves.”

In another sense, Golding stated that ‘Star Wars: Visions’ offers “windows” to unlimited possibilities inside ‘Star Wars’, so much so that the story of a short film like ‘Akakiri’, in his opinion, could give rise to a movie by itself.

In addition, the interpreter put this series in the attempts of Hollywood to offer a more careful and respectful representation of the Asian culture, something that has had good results at the box office with the aforementioned ‘Crazy Rich Asians’ or the recent ‘Shang-Chi and the Legend of the Ten Rings’ (2021).

“I think we are definitely in the right direction. And I think putting a asian protagonist in a Jedi movie it would be the best for everyone, “he said with a laugh when he applied for that hypothetical role.

‘Star Wars: Visions’ reinforces the bet of Lucasfilm for growing more and more on the small screen, a medium that has given him almost more joy than cinema in recent years.

After the very controversial reception that the third movie trilogy -not to mention other failures like ‘Solo’ (2018) -, Star Wars has found calmer and more favorable waters recently on television with brilliant examples like ‘The Mandalorian’.

This series, starring the Chilean Pedro Pascal and which is the first non-animated television production of ‘Star Wars’, has become a great phenomenon around the world since its premiere in 2019.

While waiting for the third season of ‘The Mandalorian’, fans of ‘Star Wars’ will be able to see in December ‘The Book of Boba Fett’, about the famous bounty hunter Boba Fett, and in the future they will arrive ‘Andor’ and ‘Obi-Wan Kenobi’ with Diego Luna and Ewan McGregor as protagonists, respectively.

Other topics that could interest you: