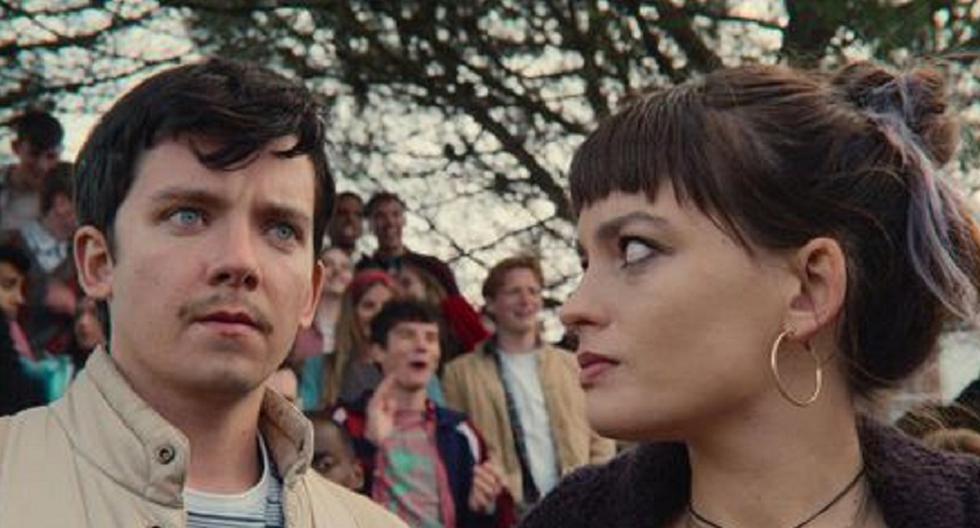 BEWARE, SPOILER ALERT. After not talking all summer, Otis and Maeve meet again in the third season of “Sex Education”, But each remains in their own drama: while Jean’s son maintains a secret relationship with Ruby, the young rebel gets even closer to Isaac, not suspecting his secret of the deleted message.

MORE INFORMATION: “Sex Education”, will have season 4 on Netflix?

Meanwhile, a new director comes to Moordale with the intention of saving her reputation, and although she seems to have good intentions, her methods are not the most appropriate. Instead of listening to the students, it imposes strict rules of conduct and dress, and it also promotes abstinence, something that outrages more than one.

Jane reveals her pregnancy to Jakob and although at first they prefer not to be a couple again, therapy makes him change his mind and they move in together. Living together is overwhelming, both for them and for Otis and Ola.

While Eric and Adam live their romance with the challenges that it implies, Aimee discovers feminism, Ola and Lily do not have good communication, Jackson falls in love with the new student, but he moves away from her friend, and Ruby tells Otis that it loves.

WHAT HAPPENED AT THE END OF SEASON 3 OF “SEX EDUCATION”?

Otis can’t say the same, so Ruby gets angry and soon after they end their relationship. After apologizing to his ex, the protagonist of “Sex Education”He approaches Maeve once more, who, after forgiving Issac for deleting his message, kisses him and admits that he has feelings for his neighbor.

Thanks to the school bus leaving them behind after an accident, Otis and Maeve have a chance to talk about their feelings. Although they kiss, they cannot be together because she is confused.

Later, they try to talk about it, but their personal problems Maeve’s mother kidnaps her daughter and Jean’s delivery becomes complicated, they prevent them. At the end of the third season, the young rebel must travel for studies, so they simply say goodbye in the hope of a future romance.

Meanwhile, Eric kisses with another boy in Nigeria and when he returns home he realizes that while he is ready to fly, Adam is just learning to walk, which leads him to end their relationship. Like Eric, Aimee decides to leave her boyfriend to go back to being herself and get over her ordeal.

On the other hand, Cal makes it clear to Jackson that they can only be friends for now and the former swim team captain agrees. And after the Moordale students sabotaged Hope’s event, the school might disappear.

Although Jean’s unemployment is complicated, in the end everything works out, in fact almost everything, since after fixing the problems with his family, he receives the DNA test that Jakob requested and his reaction is not good news.

WHAT DOES THE END OF SEX 3 OF “SEX EDUCATION” MEAN?

After the end of the third installment of “Sex Education”, It is inevitable to think of a fourth season of the dramatic comedy, but so far, Netflix has not made any announcements about the future of the British series.

However, apparently in the last chapter, the crazy and complicated stories of the Moordale students are not over yet. What will happen to the school? Will the protagonists have to find another study center? Will Otis and Maeve finally be together? Will Isaac give up? Will Eric regret his decision? What does the rapprochement between Adam and Eric’s ex mean? Will Ruby start dating someone else? Is Jakob the father of Jean’s son? How will they deal with it?

In an interview with Cosmopolitan UK, Asa Butterfield, who plays Otis in the series Netflix, He confessed that he would love to participate in a fourth season, but noted that he still has no information about it.

“We do not know [si habrá más]. It is out of our hands right now. I wish I could tell you more, I really don’t know, “said the 24-year-old actor, even talking about a spin-off,” it would be nice, but it has to be well thought out and really unique and not just for doing a spin-off. ” .

“I would love to do a fourth season, because we have so much fun on this show. At the same time, we have been doing it for three years, and I would be happy to say goodbye to these characters … We ‘will have to see, “he added.