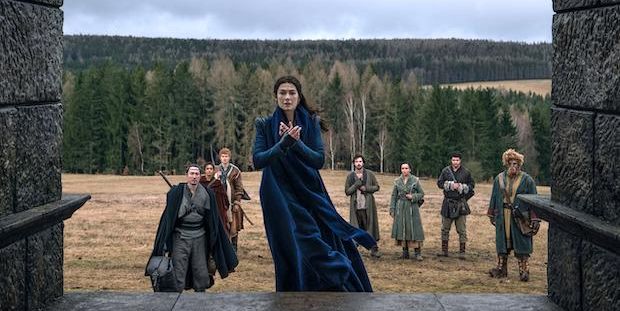 It does not usually happen that before the end of the first season of a series we already have confirmation to recover it in a second installment, but Amazon Prime Video’s commitment to The wheel of time It is so strong that before the premiere of its first episode it already had the security of having three seasons. And the series is rewarding its creators handsomely. It has been one of the most important series of this 2021, the most watched premiere in the history of Amazon Prime Video and the study’s greatest success, and it seems that it will continue to be at least until the premiere of the series of The Lord of the rings.

Rafe Judkins, el showrunner of the series, began writing the scripts for season 2 in August 2019 and has already started filming that will last from July 19, 2021 to February or March 2022. The idea is that the series reaches nothing less than eight seasons, few if you think there are 14 books of The wheel of time waiting to get to the screen, but an outrage for the current series. The scale of the project is such that at this point no one doubts that it can compete with Game of Thrones Come in the best fantasy series ever.

We are still assimilating much of what happened to end of the first season, but we already know a lot and we can intuit what 2022 has in store for us. This is all we know about season 2 of The wheel of time.

Although Amazon has not set a specific date for the next episodes of the series, the second season is announced for 2022. It should finish shooting in February or March and after that there will still be a long post-production process that will require a few months of editing and the much needed visual effects. Everything indicates therefore that we will see it, if there are no delays, at the end of the year.

Taking into account the dates of the first season, we will most likely watch season 2 of The wheel of time between November and December 2022.

‘The wheel of time. Season 2 ‘: Synopsis

There is no official argument as to what will be the plot of the second season of The wheel of time but between the books, the end of the previous session in the Eye of the World and the data that we already know of the production is much that we can deduce with certainty and the theories that we can imagine.

To begin with, we know that the paths of the protagonists have once again parted. Rand heads to the Aiel Wasteland in search of answers about his past; Egwene and Nynaeve have to learn to control their powers which can lead them to the White Tower; Perrin “Golden Eyes” has taken the ax for the first time and it seems that he is going to chase Padan Fain in search of revenge ?; Moiraine and Lan have to get used to her new condition now that she cannot channel and the bond between Aes Sedai and Guardian it has disappeared; and Mat … well, who knows, at the moment it seems that Mat is entering the dark side since you refused to escort the rest through the shortcuts.

Since it was revealed that Rand al’Thor is the Dragon Reborn and that he is capable of channeling the cursed male half of the One Power, we know that throughout this new season the character will have to face the madness that threatens all men who touch the Saidin. It is even possible that he meets Lews Therin Telamon, the Dragon of legend, in his visions.

In addition, Rand will have to learn very quickly to master his powers without Moiraine being able to help him. Here it is possible that the character of Logain Ablar, played by Álvaro Morte, who despite having been tamed could guide Rand in his learning and give him various tips to keep him in control. At the moment, Rand is on his way to the Aiel Wasteland, where we will meet the warrior civilization and some of its most distinguished representatives. As the Maiden of the Lance, Aviendha, a character who is going to give a lot to talk about.

For his part, Perrin looks like he’s going to chase Padan Fain already the trollocs, fados, and shadowspawn accompanying you. In spite of the differences with the books of The wheel of time, this point of the plot is the one that will have the most similarities with the main argument of The great hunt the second novel, where the protagonists set out in search of the stolen Horn of Valere. In this search you will be accompanied by several Fal Dara soldiers, at least those who have survived the latest events, and probably Loyal to Ogier. Loial is supposed to be dead, but have you seen the corpse? Well that. It would be a shame to waste the character like that. The same happens with Uno Nomesta. They will be joined by the Shienarians Lord Inghtar Shinowa and Masema Dagar, a soldier who will end up proclaiming himself the “prophet of the Dragon.”

Egwene and Nynaeve’s paths will likely lead them back to Tar Valon, where they will begin their career as Aes Sedai and come into contact with el Ajah Negro, which at the moment we do not know but what is one of the keys to The wheel of time, an association of Aes Sedai who serve the Dark One, who are capable of lying and plot their own intrigues infiltrated among the rest of the Ajah. We will also discover where does this leave Liandrin Sedai.

From what we know of the cast in Tar Valon we will also find Min back, who has spent her entire life avoiding the Aes Sedai so that they do not use her for her visions but who probably ends up in the White Tower with Egwene and Nynaeve. Together with her, we will meet Elayne Trakand, the heir to the throne of Andor who goes to the White Tower to develop her gift with him. Saidar. The four will establish a network of mutual sisterhood that will be decisive this season.

By the way, do you remember that in min visions, she claimed to see Rand with three beautiful women? Well, at this point we have already mentioned them all. But telling you would be like having told you before who was the Dragon Reborn.

The plot that generates the most uncertainty is that of Lan and Moiraine, who could join one of these two groups of characters or have their own separate adventures. The Moiraine’s oath to Siuan Sanche He prevents him from going to Tar Valon unless ordered to do so, so it is possible that they will join Perrin in the Great Hunt.

Finally, it is an open secret that at some point we will arrive in the city of Cairhien, a kingdom where a very impoverished population contrasts with the wealth of the noble houses, entertained in what they call the Daes Dae’mar (The House Game), a lethal pastime among the nobles of political deception and palace intrigue. If the term sounds like “game of thrones” it is because it is. By the way, you would do well to remember a detail from the Chapter 6Before being an Aes Sedai, Moiraine Damodred belonged to one of the most important houses in Cairhien, which could have important consequences. At the moment we know that a relative of his, Barthanes Damodred, is going to play an important role.

The absence? Barney Harris Who Won’t Repeat as Mat Cauthon. The reasons for their departure are unclear, but they have forced Amazon to make an unexpected recasting. Finally, a young actor who appeared briefly in The Witcher, Dónal Finn, going to play the character from now on. It is not known how the writers will justify the change, although Mat’s evolution could pave the way, or if they will trust our good faith and ignore that Mat has another face.

Among the secondaries it was assumed that Thomas Chaaning would again play Lord Agelmar, Guy Roberts as Uno Nomesta already Sandra Yi Sencindiver to Lady Amalisa; but they are all dead after the end of last season and there are too many corpses to resurrect. The resurrection of Hammed Animashaun like Loial, but it is also not confirmed. And the same happens with Alexandre Willaume like Thom Merrilin, with a much more verbose bow in the books than we’ve seen so far. As for the characters in Fal Dara, it may be that the appearance of Gregg Chillingirian as Ingtar Shinowa and de Arnas Fedaravicius like Masema Dagar absorb the rest of the characters.

Other faces that we hope to see again are those of Sophie Okonedo (Siuan Sanche), Kate Fleetwood (Liandrin Guirale) y Priyanka Bose (Alanna Mosvani) in Tar Valon with Kae Alexander (Min Farshaw) y Alvaro Death like Logain Ablar; to Johann Myers What Padan Fain already become one of the main villains of the series already Alexander Karim Y Fares Fares respectively as Lews Therin Telamon and the Dark One / Ishamael in various flashbacks and visions of Rand.

Among the new recruits, in addition to the men of Fal Dara, it has been confirmed that Coveney wax will play Elayne Trakand and they have searched for an actress for Aviendha, although the studio is keeping this a secret. He has also been signed to Natasha O’Keeffe Y Meera Syal for two unconfirmed roles.

Finally, among the information to be confirmed we have to see Haruka Kuroda as one of Min’s three stern aunts (and a condensation of all of them) already Will Tudor as Barthanes Damodred, a nobleman from Cairhien and a relative of Moiraine whose unbridled ambition in the House Game has led him to frequent dangerous company. Laura Crowshurst Y Natasha J. Murley They also appear to have been contacted for roles yet to be determined.

With the series immersed in the filming, there is still a little while for us to see the first official images of the second season. More still for the trailer. Last year these began to arrive from the summer, so you just have to count the months.

As soon as there is new news you will find it in this updated article.

Season 2 of ‘The Wheel of Time’: Everything we know about the next stage of the Amazon series