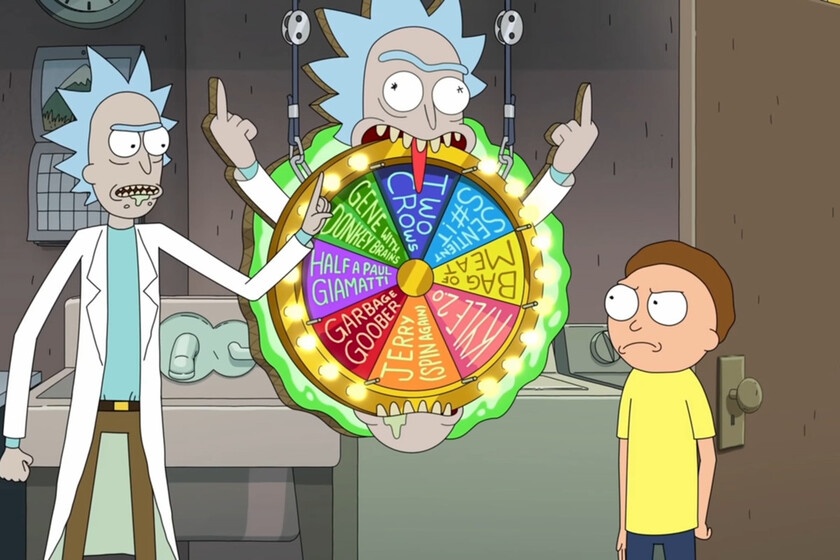 The fifth season of ‘Rick and Morty’ has ended on HBO with an episode (two, rather) that have affected a topic that has hardly been covered this year and that is undoubtedly one of the series’ fan favorites: the lore What lies behind the adventures of the thunderous scientist and his (almost) always naive grandson. We are going to break down all the topics that this couple of chapters deal with and why they could be key to the course of events.

Of course, watch out: spoilers from here on.

After a fourth season that partially disappointed fans, the fifth started with some reflection about the nature of the series, and the purpose of going back to the naive early days, when each episode was independent. It has been achieved moderately, with very positive results and adventures as memorable as the meeting with Mr. Nimbus, the successive multiplications of the family or the nonsense of the locks. In general the level of this season has been very high, but after all these independent episodes … what happens at the end?

This two-part adventure begins when Morty, after a frenzied introduction in which he is dedicated to fixing problems for different planets that Rick has been causing because of his laziness, argues with his grandfather. This one, in a moment called to be iconic, pulls out a roulette wheel in which there are a number of things that can perfectly replace Morty, like the garbage-eating creature Garbage Goober or Medio Paul Giamatti. Chance determines that “Two Crows” could perfectly replace his grandson.

In fact, that’s right: their paths separate after the umpteenth row, as we have seen so many in other seasons. Rick literally teaches two ravens that become his new sidekicks. And Morty initiates an even more toxic (yes, more toxic than with Rick) friendship with a paranoid madman with whom he is connected through a portal that has accidentally sprouted in his hand. Rick and Morty go on new adventures, each with replacements for their former teammates.

But although Episode 9 ends with Morty deciding that his relationship with Rick, toxic as it may be, is worth it., Rick thinks he has found some suitable companions in the trained crows, and this first part of the grand finale ends with a melancholy break. Rick becomes, in another of the great creations of the series, an adventurer of his own anime series. dark fantasy.

The crows (through a delusional subplot about a planet with giant anthropomorphic crows reminiscent of the ‘Dark Crystal’ Skeksis, but in a kind version) have taught Rick what empathy is, and this is what encourages the scientist to start a life as an anime adventurer accompanied by two crows with whom you have a clean and renewed relationship. But Morty is not willing to forget him.


Morty, now turned (one of the best jokes of the season) into a bald man in his forties and with the guts to emotionally blackmail Rick, manages to make him see that they have to get back together, something that the scientist ends up seeing when their relationship with crows it is also spoiled. They decide to go to the Citadel to resolve the adult Morty situation, or as the scientist literally enunciates, abandon that structure of independent adventures of the season and re-entering the continuity of the series, which has its dangers.

We will not fully explain the Citadel, but it is a key location for the series: it is a galactic city where there are Ricks and Mortys of innumerable dimensions, it is the place where they can be protected of his many enemies. In the third season, it took on special relevance after the first big trauma of the series: the revelation that the Citadel produced clones of Morty to serve as infinities. sidekicks perfect and disposable. At the time of the arrival of our Rick and Morty, President Morty (actually the Evil Morty from season 1) rules the Citadel with an iron fist.


The real Rick Sánchez, or so it seems

Evil Morty teaches how the Citadel is built on a system of slaughter and reuse of millions of Mortys, and proposes to Morty (“our” Morty) to run away with him and leave Rick behind. But Morty still trusts Rick and re-educating him, in an attitude -also- melancholic toxic. But there is something else in this episode, which undoubtedly marks a before and after in the series: we will finally know the backstory about Rick, his past and why he is the way he is.

In a narratively risky and fascinating wordless journey through Rick’s past, we will discover how an alternate Rick kills his wife and daughter. Whether or not that daughter is Beth (the eternal theory that the Beth we have always known is not real) is a dilemma left in the air, although a possible explanation is offered here: Rick, depressed, accidentally lands in a dimension in The one that Beth hasn’t died, the one we know about. Other than that, it is clear that Rick’s story is a story of interdimensional revenge. At its origin is the creation of the Citadel, the troubled relationship between all the Ricks and even the mistreatment of the Mortys.


This is a key moment that puts some order (and emotion) in the confusing lore of the series, and certifying that what Rick himself had told about the death of his family and then dismissed as a lie, was actually true. The episode concludes with Evil Morty fleeing not to another dimension, but to a space beyond the multiverse., where there is no toxic relationship with Rick. And our Rick and Morty, through a gag as simple and emotional as that of the lever that can only be moved “with the help of a partner”, return to the starting point.

This season finale It has not been a Crisis on Infinite Earths that ends the multiverse of ‘Rick and Morty’. There are multiple enigmas in the lore of the series that can be explored further, starting with the loose ends: Beth and her true identity, who is the killer Rick and what happens to Evil Morty in a universe without Ricks. But this episode does feel like a full stop, because the relationship between Rick and Morty has changed: both have realized that they need each other, and also that their relationship is a mess and they have to work to change it.


But without a doubt Rick’s past is the juiciest element of this conclusion, because it corroborates the bitter reality that we have been suspecting since we discovered that Morty was nothing more than a biologically perfect meat shield. Although it is not expressly stated (at times this finale it’s as cryptic as usual), Rick could have been going through different dimensions causing the infatuation between Beth and Jerry so that Morty was born, the sidekick perfect.

The interesting thing is that with his escape, Evil Morty has broken the Finite Central Curve, an interdimensional wall that blocks all realities where Rick is not the smartest person in the universe. That is, the specific consequences are not clear, but it could lead to a new season (which the creators of the series have already warned that they will pay more attention to continuity and backstory series) that may present Rick’s deadliest enemies. More arch nemesis like Mr. Nimbus.

So looking forward to the series, we have a cleaning of plot detritus that can mean a kind of “reboot” for the series. The whole plot of the Citadel is definitely closed, because there is nothing left to explore in the idea of ​​a miserable Rick who has used Morty as a tool. The residue of that will always be there, and hopefully not forgotten, but rethinking their relationship thanks to Rick’s newly acquired concept of empathy allows us to start over.

And last but not least, with a Rick no longer as omnipotent as we knew. Will this be the time to introduce that Evil Rick (for lack of a better name) as the ultimate enemy? of our antihero? If something is clear, in any case, it is that ‘Rick and Morty’, with interdimensional cable and Pickle Rick or developing its own story with continuity, will not stop surprising us.