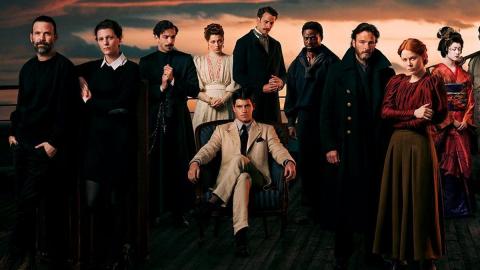 Baran Bo Odar Y Jantje Friese They blew our heads off with the science-fiction trilogy Dark. Now they return to Netflix with a new series of eight episodes of about 50 minutes on average: 1899, that not only reminds us of it but also expresses the best virtues of that one by recovering cast members, betting on an even more ambitious staging and twisting the temporary games.

They are not easy narrators or condescending to the audience, so that, as happened to us with their previous work, they demand attention and respect from us towards characters whose lives are gradually unraveling before us.

Each episode hits us with a tremendous final cliffhanger, trapping us in its tangle of revelations that seem to point in different directions.

Trailer for 1899, the new series from the creators of Dark for Netflix

The series takes us to the year indicated by the title: 1899. A steamship called Kerberos and full of immigrants travels to New York. They all seem to be running from something and dream of a future in the new world.

However, during the journey, they discover another immigrant ship adrift on the high seas and when the captain eyk decides to go look for it in an effort to rescue those who were traveling in it, his trip takes an unexpected turn.

Suddenly the telegraph breaks down and some members of the crew will exhibit the most strange behavior, manipulating some objects of unknown origin to alter the position of the ship.

In addition, what they will discover on board the Prometheus It will turn their journey to the promised land into a nightmarish enigma that will connect the past of each of the passengers through a complicated web of secrets. Unexplained events will be the subject of investigations by Maura Franklina woman with amnesia linked to the shipping company and obsessed with a mental hospital.

1899 It has a large cast and is a very choral work. Despite this, the creators of the series manage to make each of them important, enigmatic and therefore interesting to the audience in their own way. In fact, they have many layers and a traumatic past as a link, in addition to certain missives that will gradually be revealed.

One of the strong points of fiction is, therefore, the careful dosing of information and the use of frequent turning points in a script designed almost as a fictional artifact that every X time is reconfigured to drop a depth charge.

Numerous characters and the use of different languages, as a general rule, are a drag on the development of a plot, and even more so if it is a series, but 1899 is, in this case, an exception to the rule: he manages to captivate with the personal stories of each of them and it is fully justified that they speak their language. What’s more, the viewer would be shocked otherwise.

The two main protagonists stand out, with brutal chemistry on screen: Andreas Pietschman Y Emily Beecham who are joined, among many others, by British actors Aneurin Barnard and Anton Lesser (He is specializing in dark roles, as he is demonstrating by giving life to General Partagaz in Andor) as well as Spanish Michael Bernardeau.

The German series has many possibilities to develop the story because it opens many fronts. It may be that one of his Achilles heels is precisely that: although he gradually opens them up and seems to be on the right track, it is also true that he overwhelms with the introduction of so many subplots.

It would be very disappointing if it turned into a series like lost with too many unresolved mysteries, although experience tells us that these writers bet strongly on leaving the stories they develop closed.

On a technical level we can only be full of praise for the very judicious use of the soundtrack of Ben Frostwhich already took care of the Dark and composed that of Raised by Wolves, also very powerful. In the photograph we also have another repeat offender: Nikolaus Summererwhich gets a lot out of the possibilities offered by the series.

Both sections, music and photo, are essential to maintain the narrative tension and an outstanding use of special effects is also added.

It is 1899 best sci-fi series Netflix in so far this year? You can bet yes. We’ll see how it plays out in the future, but it certainly offers us an incredible journey where anything is possible.

Review of 1899, the new mystery series from the creators of Dark for Netflix

Strong reproach from Karina La Princesita to Ángel de Brito on the air: "I look you in the eyes and ...
The day Alberto Ciurana got fed up with Daniel Bisogno and decided to kick him out of "Ventaneando"
Selena Gómez launches '999', her new song with Camilo