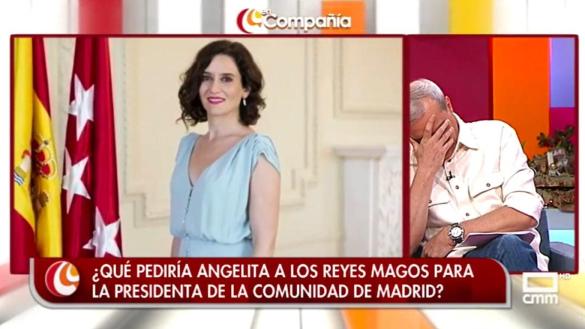 After giving the Chimes on the Twitch channel of Ibai Llanos, Ramon Garcia This Monday he has returned to the front of In company, his program in Castilla-La Mancha Media. For this, the program invited Angelita, a woman from Pedro Muñoz (Ciudad Real) to comment with her on the news.

During her time on the program, they asked Angelita to say that she would ask the wise men for different characters of the current media that were appearing on the screen. One of those characters was none other than the president of the Community of Madrid, Isabel Díaz Ayuso.

“Oops, it’s also in fashion,” said Ramón García as soon as he saw the image of the president of the Madrid’s community . “La Ayuso,” he would say to her. However, the response to the gift Angelita had prepared for Díaz Ayuso left everyone with their mouths open. “To that one satisfyer“Said Angelita, causing laughter from the audience on the set.

While the presenter covered his face trying to contain his laughter, something that Gloria Santoro, co-host of the space, could not hold it began to laugh. “That one needs it”, Angelita kept saying to the laughter of everyone on the set. Trying to stop what happened, Ramón joked that they called him from the program’s address by phone. “You are giving me the day today, huh?”, recognized the presenter.

“We are not responsible for the statements of our guests, right?” Explained the presenter. “Yes, a satisfyer has said“Ramón later commented, speaking through the earpiece, while Gloria pointed out that” a staisfyer is very good. “” Yes, with batteries to give it a treat, “Garcia joked about it.”Nothing, they had renewed us a year but now they are thinking about it”, The Basque presenter ended jokingly.