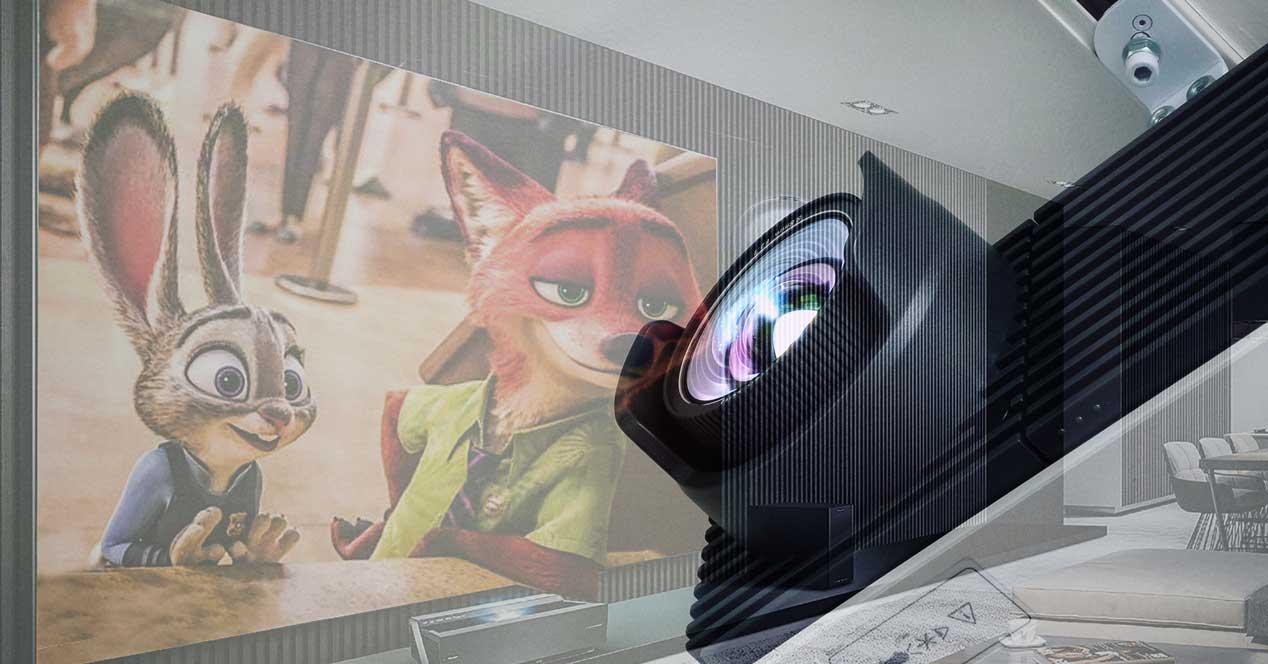 There is no one better than another when deciding if you want a smart tv or do you want a projector because it depends on many factors, it depends on each person and it depends on the situation or the place where you are going to use both. But, in addition, it also depends on the model in question that you are going to choose or buy. The refresh rate will not be the same on a television as on another, just as the color or brightness or the audio system of the low range will not be the same as that of the high range of a brand.

That is why there are a number of aspects to take into account when choosing and some advantages that both options have, be it their size or versatility.

What should we consider?

When deciding, there are several things that we must take into account …

It will depend on the space available that we have better a Smart TV or a projector, for example. It is not logical to use a projector in the kitchen at home if all you see is a program while cooking or while you are eating or having dinner. In that case, it is normal to use a small television and we do not have space to project a movie on the tiles. It will also depend on the size or space available in the living room, for example, since not all of us have a wall that is clear enough to use a large projector, but we do have a television.

We must not only look at the use or the size of the wall but we must think about whether the room that we are going to use is actually enabled. 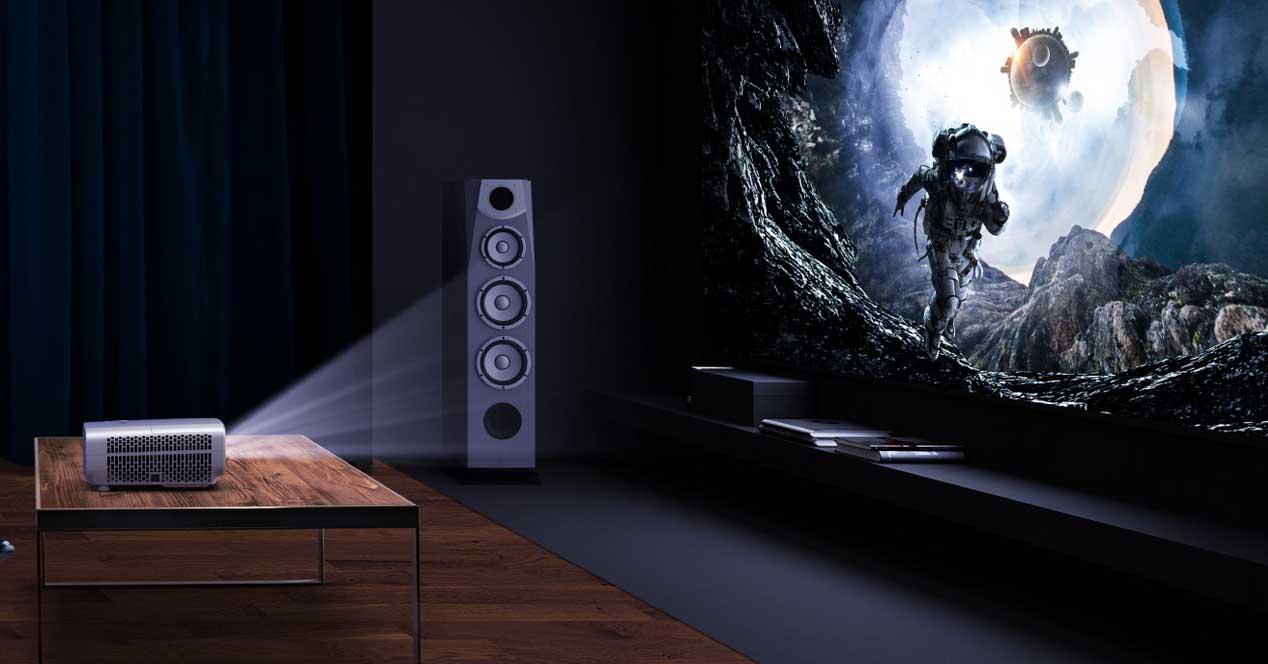 Another aspect to take into account is the use that we are going to give it. When it comes to being small children or grandparents who are going to use it, the television will always provide us with greater ease when activating it, configuring it, etc. You have to take into account some features of projectors such as that turning it on usually takes longer than a normal television or that a Smart TV is usually more complete in terms of apps than a projector, which does not usually bet on this and to which you should connect a computer in most cases. 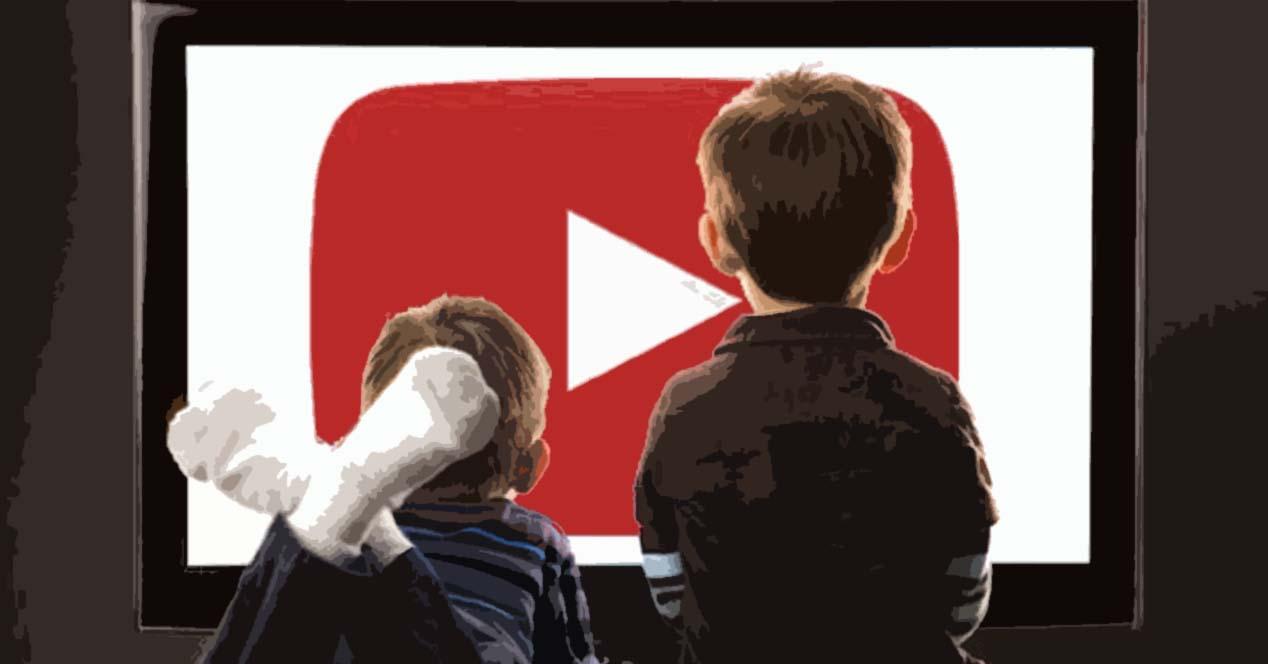 Size is one of the first things we look at when choosing and there is usually a clear winner here and it is the projector since we will get a huge screen over a hundred inches at a more affordable price than a quality 120-inch television screen, for example. If we want to set up a movie theater in the basement, it will be more advisable to do it with a projector, for example. 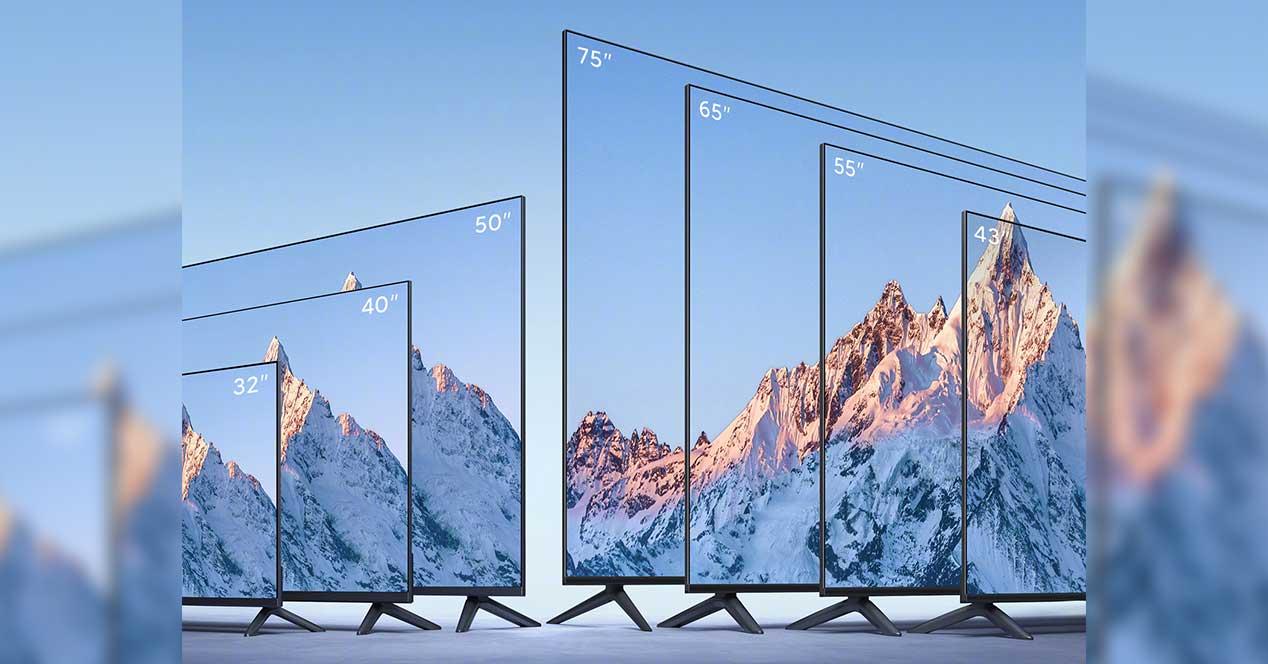 What we are going to spend something is always one of the things that we must take into account. We must not only decide whether one or the other, but we must decide to choose a quality one. You don’t just choose a projector or TV, but the quality will vary a lot depending on the model. That is why it is essential to know how much we want to spend. 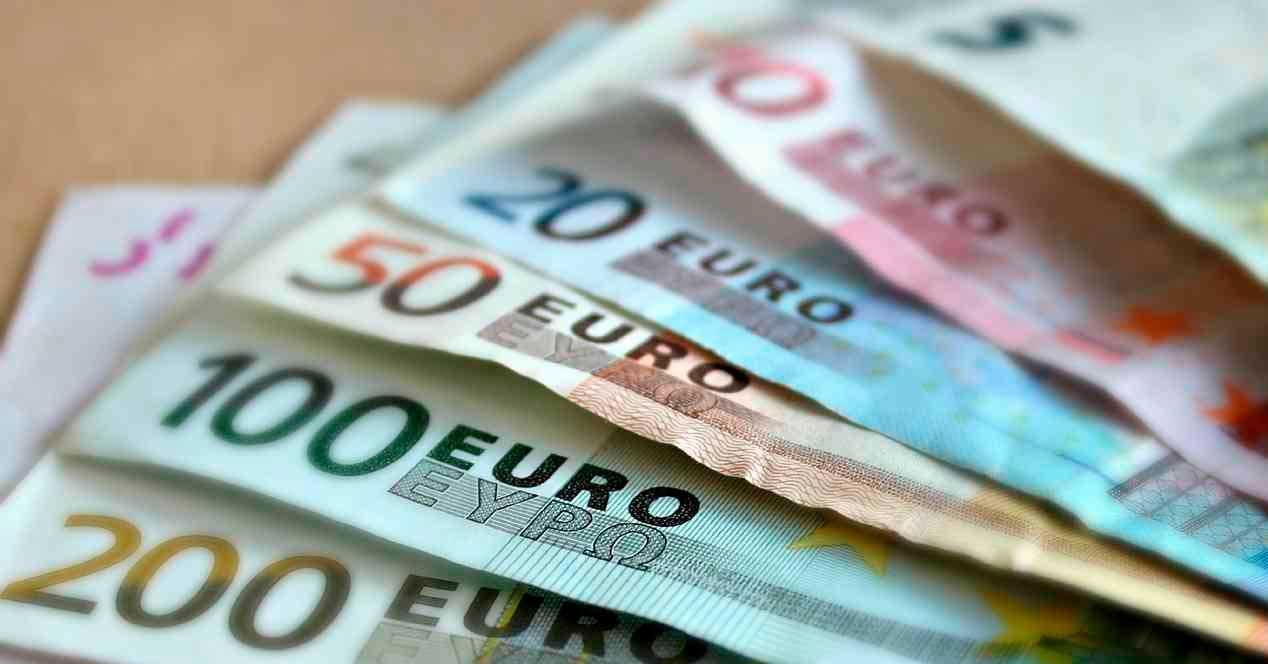 Reasons to choose a TV

There are some advantages of the television over the projector and that we must take them into account when making the decision. Better quality, sound, connectivity.

Easy to use and easy to install

Although you may be doubting, most of the people around you want a television easy to use. Your parents, your grandmother, your cousin, your brother-in-law. One button on the remote and it turns on and you choose the color. It is also much easier to install than a projector that is not excessively complex but it will always be more than placing the television on the furniture, plugging in the antenna and power cable and pressing the power button to start watching everything.

You have less dependence on space, on light. A television is a good option in any room, whatever the size and whatever light it is. If you just watch the news or an after-dinner movie, you don’t want to have to lower the blinds to see it. You don’t have to have a completely empty wall for the projector either, but you can have a large piece of furniture with space for the TV, for example. In these cases, we have less dependency to choose from.

If you are going to choose a Smart TV the intelligent system is integrated without the need to use a device such as Chromecast or Xiaomi Mi Box. You simply go to the applications section and log in to Netflix, YouTube and all those you need. Otherwise we will need to make use of these smart devices that add the option to download and use these applications.

When buying a television you have best Colour, better brightness and higher contrast than if you are going to use a projector. The image quality will be better.

You do not need buy speakers separately, for example, when buying a television. You may want a soundbar to improve audio quality but it is not essential to have one and you can settle for your own speakers. In the case of the projector, we will need, in most cases, a better sound system since they are generally of a quality that can be improved enough and many of them do not even bring an integrated audio system. 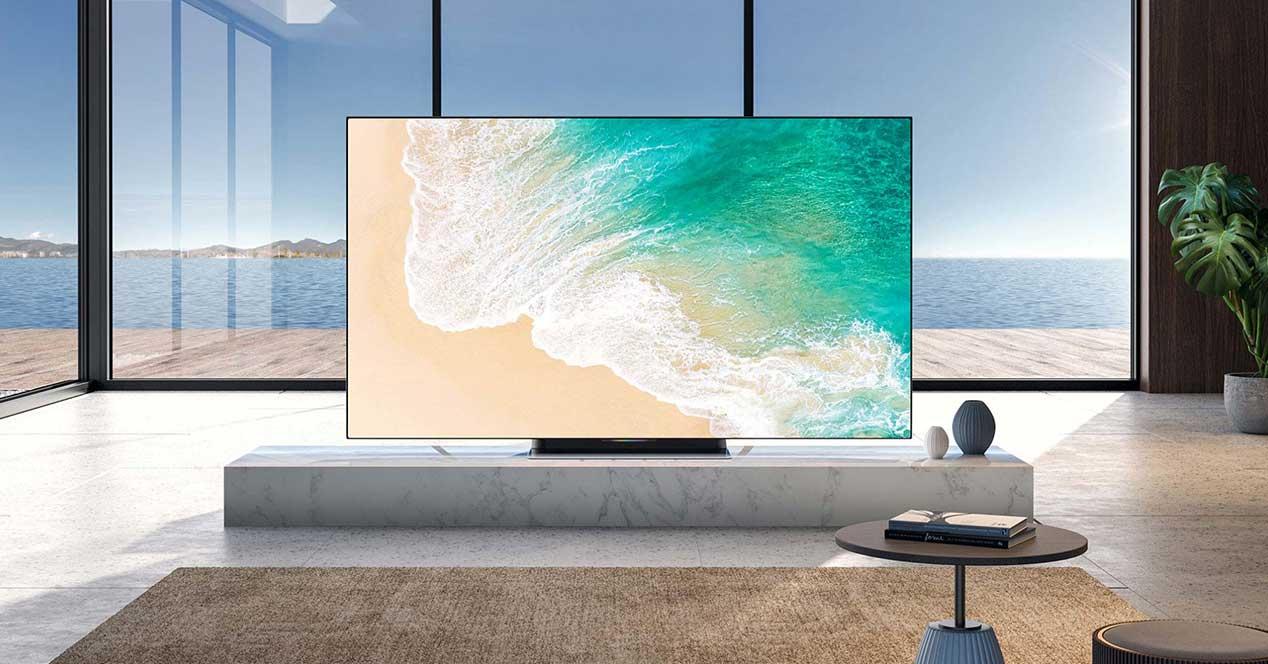 Reasons to bet on the projector

What are the reasons that would tip the balance next to the projector? The lovers of movie theater, those who want to carry it or transport it or for whom size is the most important when making a decision.

The great advantage or the great reason to buy a projector is, without a doubt, the size. The size of the screen. It is unlikely that you have a smart TV at home 120 inches but it is easy to have it with a projector whose only screen limitation is the space you have on that wall. You can get a hundred inches for a few hundred euros compared to the thousands of euros of the television.

It is true that you are going to need adapt the room to the projector because you will need a completely clear wall but you are only occupying that wall or that place when you have it on. The rest of the time you do not need a piece of furniture or sideboard that takes up space and can be dedicated to anything else.

Having a television of more than 100 inches is going to cost you several thousand euros if you want good quality but a projector is much more affordable to achieve this. On higher diagonals, the price will be much better in this case. Although we must bear in mind that practically all 100-inch televisions are high-end, of the highest quality. Not all the projectors that we are going to buy are of the best range and this is an important factor.

You can take it elsewhere

If you’re going to spend a couple of months in a summer house andIt is much more comfortable to take a projector to do film sessions than to do it with a large television that you have to have much more protected to avoid bumps or possible scratches or breakage when transporting it in the car. Also if you are going to spend a weekend away from home. A projector it hardly takes up space to transport it.

The optimum and the reason why we could undoubtedly bet on a projector is if we decide make a home theater. If you have a basement and you want to have a big screen to watch movies on Netflix, HBO or Disney +. In this case, being in a space where there is little light (such as a basement) it is ideal to bet on the projector and you will get an experience much more similar to the real cinema. If you accompany it with a powerful speaker system you get a enviable experience.

It is more comfortable and a better option if you usually invite your friends to see it with you or your family or if you are a large family. It is not only an option to watch movies or series (which too) but also a great idea to enjoy football on the big screen with your friends or for “special” events, whether they are sports such as an important final or of another type, such as for Eurovision fans. In company, a projector offers us better visibility for all the people who go to see it with you, whatever the content.

Less annoying for the eyes

Projectors can produce less visual fatigue than if we use a television. Generally this is because the contrast is lower but also because they reduce the blue light effects or less direct light because they use a reflective light, something more comfortable if we compare it with Smart TV. 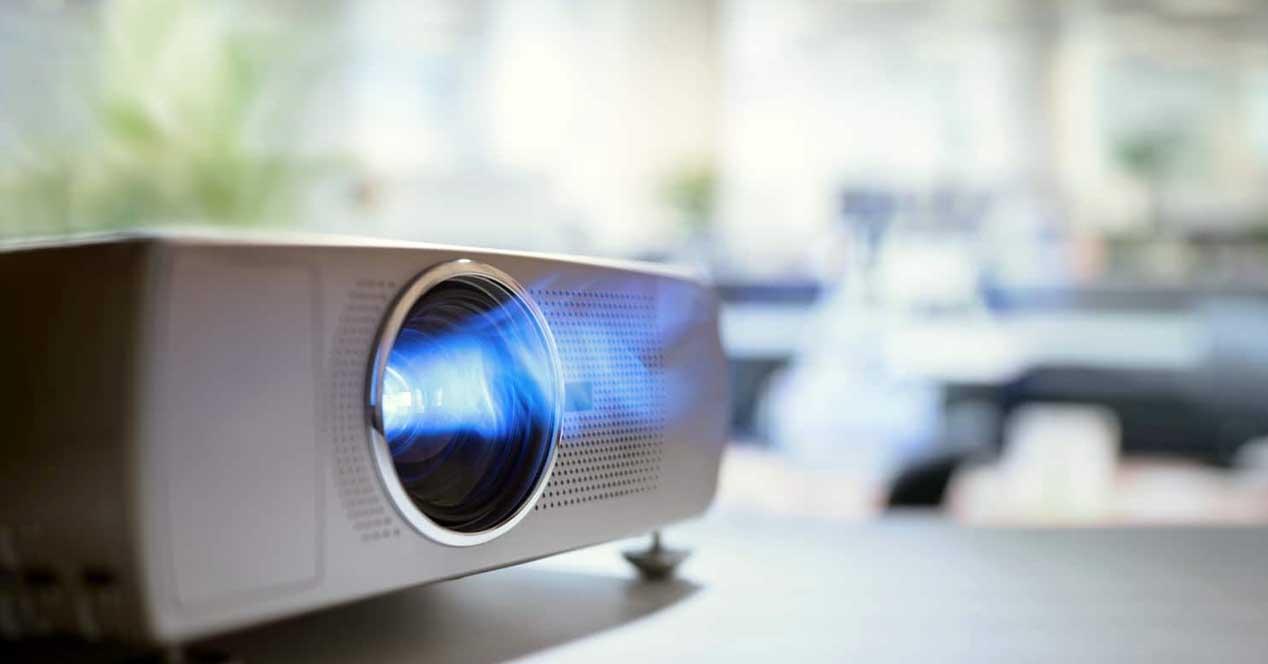 Conclusion, what to choose?

They are not comparable and there is not one better than another but depends of your needs, your space, the use you are going to give it or the money you are going to invest. Maybe a projector is cheaper than a television but it ends up being more expensive if you are looking for excellent quality since you will have to invest in good sound equipment, for example. Of course, you will get an unbeatable cinema experience at home as long as the conditions are met and the room is ready.

It makes no sense to choose a projector for your living room if you only see the news at noon on TV, the after-dinner movie on Saturdays or the talent show in prime time. In this case, a television is much more practical, there are many models to choose from and you will surely find one that fits what you want and need without going any further.

What I have to choose? Taking into account the advantages and disadvantages of each one or the possible uses that you are going to give it, this is when you must decide what is best for you, in your specific case.