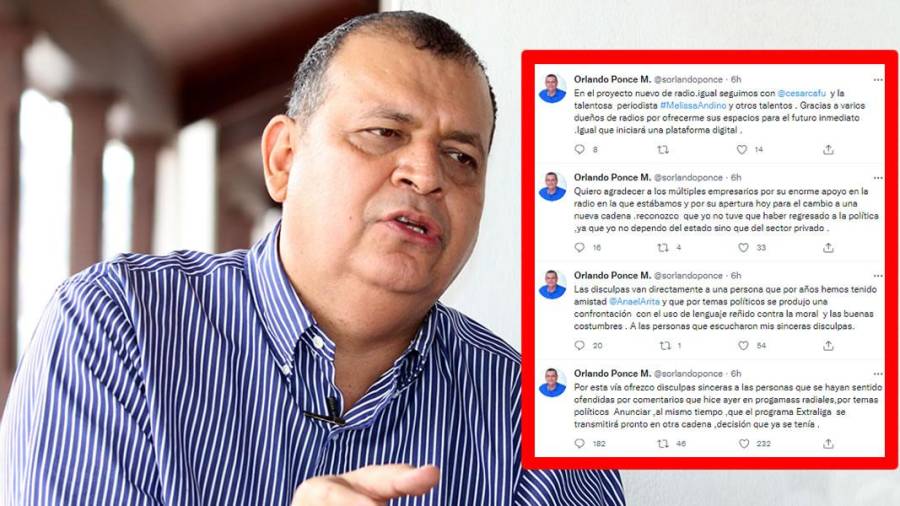 The sports journalist Orlando Ponce Morazan got caught up in a scandal by starring on Tuesday a tremendous discussion that almost ended with blows during his program ‘Extraliga’ on Radio América.

It all started when the Televicentro narrator also denounced that he was the victim of a “fraud” in his candidacy as deputy for Francisco Morazán and that he was being charged a large amount of money to be among those elected by the National Party.

Faced with these accusations, his colleagues in the program César Rosales and Melissa Andino reproached him for the complaint because he had not been among the most voted disputed. In addition, they asked him to present the evidence.

Ponce Morazán did not like that and reacted very annoyed against another of his teammates, Anael Arita, who he fired live. This caused both to come up with strong insults and they almost went to blows.

One day after what happened, Grupo América, from radio stations in Honduras, decided to terminate the programs that Orlando Ponce had: Extraliga and Heading to the Stadium.

Orlando Ponce took a step forward to speak out for the controversy and apologized on his social networks to Anael Arita, as well as to the other colleagues and listeners of the program.

“In this way I offer sincere apologies to people who have been offended by comments I made yesterday (Tuesday) on radio programs on political issues. Announce, at the same time, that the Extraliga program will soon be broadcast on another channel, a decision that had already been made, ”the journalist began by saying.

“The apologies go directly to a person whom we have been friends with for years, Anael Arita, and who, due to political issues, was confronted with the use of contested language against morals and good manners. To the people who heard my sincere apologies, “he added.

And he continued: “I want to thank the many entrepreneurs for their enormous support in the radio station where we were and for their openness today for the change to a new channel. I recognize that I should not have returned to politics, since I do not depend on the state but on the private sector ”.

Finally, Ponce explained that “in the new radio project, we continue with César Rosales and the talented journalist Melissa Andino and other talents. Thanks to several radio owners for offering me their spaces for the immediate future. Just as a digital platform will start ”.