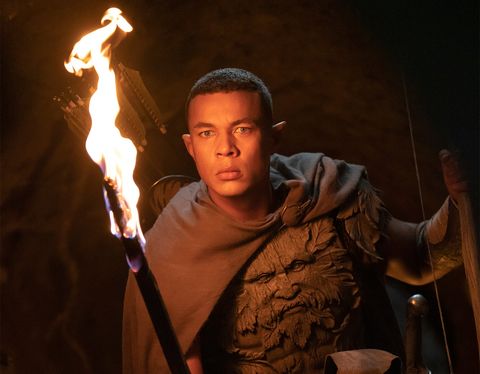 The debate had been simmering on the Internet for years. Specifically since Amazon announced the cast of your series of ‘The Lord of the rings‘, a list of names that included several non-Caucasian actors and actresses. The spectators were divided into several groups: there are those who do not care in the least that there are elves, dwarves and Hobbits (excuse me, hairy) of color, those who find this fact a bit forced within the Tolkien universe and then there are the racists and people of the extreme rightdetermined to use any new cultural product in their battle against progress and diversity.

‘The Rings of Power’

I have to admit that when I saw the first two episodes of ‘The Rings of Power’ I was surprised to find myself in the second group. At first, the elf Arondir, played by the Puerto Rican Ismael Cruz Cordova, the hairy Sadoc Burrow, played by the British of Jamaican descent Lenny Henry, or the dwarf Princess Disa, played by the South African actress Sophia Nomvete, provoked me. a little shock. The color of his skin did not quite fit the image of Middle-earth that I had built up by reading JRR Tolkien’s books. in my childhood and watching an indeterminate (and very high) number of times Peter Jackson’s trilogy. (The only trilogy I’m willing to remember. ‘The Hobbit‘? I don’t know what you are talking about.)

SEE ‘THE RINGS OF POWER’

Were there characters of color in Tolkien’s work?

Whether or not there were ethnicities of color originally within the races of Middle-earth is open to debate, although the short answer is “no.” It is true that Tolkien described the hairy ones as somewhat darker-skinned ancestors of the Hobbits, but otherwise, the writer built his universe based on a European and Nordic mythology and inspired by a tradition of western medieval literature. There are some peoples, specifically the Orientals and the Haradrim, who had brown skin, and Jackson influenced this idea by depicting them as Arab or African men. But they are distant and somewhat blurred groups, remote armies that are allied with the forces of evil.

Namely: Tolkien envisioned a multicultural universe in which different races with their different languages ​​and traditions joined forces to fight evil. The only thing is that all those races seem to be white. There are those who defend that the writer did not say at any time that the characters were not black, but explicit reference is made to the paleness of the elves, and that of Aragorn. And it is true that in his work there is a leitmotiv about light against darkness, light colors against dark ones, as a metaphor for the struggle between good and evil.

Was Tolkien, then, a racist? This question has been asked by scholars of his work for several decades, and the answer is ambivalent. There are enough reasons to believe one thing or the other. On the one hand, it is true that he insulted Hitler and showed a certain disdain for the idea of ​​the supremacy of the Aryan race. When asked by a German publisher if he had Aryan roots, in order to publish ‘The Hobbit’ in Nazi Germany, Tolkien replied in a letter: “I’m sorry, but I don’t quite understand what you mean by ‘arisch’. I am not of Aryan extraction, that is, Indo-Iranian… But if I am to understand that you are asking if I am of Jewish origin, I can only answer that unfortunately I do not seem to have any ancestors among those talented people”.

Okay, he wasn’t a Nazi or an anti-Semite. But many have found in his work problematic connections between orcs (and basically any incarnation of evil in Middle-earth) and black and colored ethnicities.. He did, however, make clear his stance contrary to allegorical readings of ‘The Lord of the Rings’, and denied any relation of Middle-earth to the real world of the 20th century. And when he had to explain the orcs, he said that more than a race they were a representation of pure evil. Something that existed exclusively in fiction. “In real life the orcs are on both sides, of course”he said in a letter to his son Christopher, assuring that both fronts of World War II were “mixed alliances of orcs, beasts, demons, honest men, and angels”.

In reality, Tolkien was never actively racist. In fact, when his son told him that black people were mistreated in South Africa, where he trained for World War II, Tolkien replied that he had known about this discrimination since his mother had told him about it years before. . “The treatment of colored people is almost always horrifying to anyone who leaves Britain, and not just in South Africa”he wrote in a letter.

What was in the writer, and was reflected in his books, was compassion and empathy, and a denial of generalizations, which demonstrate his deep humanism. He came to oppose the anti-German propaganda that was spread in the UK during the war, despite his antipathy for the Nazis. One of the most revered passages from ‘The Lord of the Rings’, which Jackson included (slightly changed) in the films, serves to illustrate this:

“It was Sam’s first time seeing a Men vs. Men battle, and he didn’t like it at all. He was glad not to see the dead man’s face. He wondered what the man’s name was and where he came from; and if he was really bad at heart, or what threats had dragged him on this long march so far from his land, and if he had not really preferred to stay there in peace… ”.

This moment occurs in ‘The Two Towers’ when Sam comes face to face with the corpse of a Haradrim warrior. Sam, one of the trilogy’s moral compasses and perhaps its most compassionate and purely good character, wonders what’s behind a black man, humanizing what until then had been little more than a soulless monster. These thoughts probably went through Tolkien’s own head when he fought in World War I, and they sum up the philosophy that Tolkien imprinted on Tolkien’s work. Even if Middle-earth has a hierarchy based on race, and if there is no representation of colored characters, its heroes often show mercy, tenderness, and generosity and accept (even admire) difference, as evidenced by Gandalf’s obsession with the Hobbits. ). When the elves behave with contempt or paternalism towards men, it never ends well. And in the end it is the Hobbits, an unknown and ridiculed “lesser” race, who save Middle-earth from Sauron.

That doesn’t eliminate the problematic elements that have given dozens of Tolkien scholars headaches. And something has to be there when different white supremacist groups have shown again and again their interest and their connection with the saga. After all, his influences, his heritage, his context, were those of British colonialism, and both in his work and in his letters there is a certain imperialist assumption of superiority over European peoples. Tolkien, in short, was a man of his time (and at that time there were not many deconstructed men).

Which brings us to ‘The Rings of Power’. What’s wrong with the creators, JD Payne and Patrick McKay, including characters of color? It’s just one more artistic license of many (many) that have been taken. This is a fairly loose adaptation that aims to take advantage of certain gaps in the history of Middle-earth, instead of telling a specific book page by page. An expansion, let’s say, that has the approval of Tolkien’s heirs, who not only support the project but also collaborate with it.

An artistic work reflects the moment in which it is made, whether you like it or not. Peter Jackson’s adaptation gave more weight and will to the female characters in accordance with a situation for women in the year 2000 that was very different from that of half a century before, when ‘The Lord of the Rings’ was published. Right now, Hollywood is all about representing diversity in front of and behind the camera; this can be read as a good thing fueled by the conversations western society is having about racial injustice, or, with no little cynicism, as a superficial fad contingent on political correctness designed not to lose money. In either case, the result is positive: more diversity, more equity and a widening of the group of people who can access opportunities.

‘The Rings of Power’

Some may say, as I caught myself thinking: “I am not against diversity, but not in my Middle Earth. In my Middle Earth there are trolls, wizards, talking trees, and 5G spheres, but no people of color.”. It is true that there are other fictional universes that can be adapted, or even original series and movies could be created with all-new stories and characters of all possible colors (Originals? In the Hollywood of intellectual property? Crazy!).

“You are all welcome here”

My opinion changed when I saw the reaction of a part of the public. The non-Caucasian actors of ‘The Color Rings’ have been victims of racist attacks on social networks, again, as so many others in the ‘Star Wars’ saga were. The series was subject to “review bombing”, a kind of boycott based on giving very low scores that is usually exercised on products that have anti-racist, feminist and pro-LGTBIQ+ values. The production has published on social networks a statement signed by his castwhich denounces “the inexhaustible racism, the threats, the harassment and the mistreatment that some of our colleagues are suffering on a daily basis.”

Joining the wave of support was the official ‘Star Wars’ account, which tweeted “From Middle-earth to a galaxy far, far away… #TodosSoisBienvenidosAquí”Y the actors of the original trilogy Elijah Wood, Billy Boyd and Dominic Monaghan. Frodo, Pippin and Merry wore a shirt with elf ears in different shades, from the whitest to the blackest, accompanied by elvish letters. “You are all welcome here”said the message.

Even Elon Musk joined the debate, reinforcing my need to position myself for the series…because he’s against it. “Tolkien is turning in his grave”, tweeted the tycoon “Pretty much all the male characters so far are cowards, jerks, or both. Only Galadriel is brave, smart and nice.”.

Fidelity to a work written 70 years ago cannot serve as an excuse to be a bad person. The response from what is undoubtedly a vocal minority demonstrates that ubiquitous and persistent representation of diversity remains important. There are people in this world who don’t want to see anything that is different. For them, series like ‘The Rings of Power’ are an uncomfortable reminder that the other (the other, the other) exists. Cruz Cordova himself said it very well in this tweet.

“I don’t care about the poster. The important thing is to become something that cannot be ignored, denied, irrevocably present and rooted. As a people, as beings, as individuals. A big ‘here we are’. And here we have always been”. Also in Middle Earth, of course. Because the idea that a space is not allowed to a person because of the color of his skin is very old fashioned.

Javier P. Martin
Graduated in Audiovisual Communication, he is the typical one who entered the race wanting to be a film director until the nonsense was removed after 15 minutes.

No, there were no black elves in Middle Earth. Y?