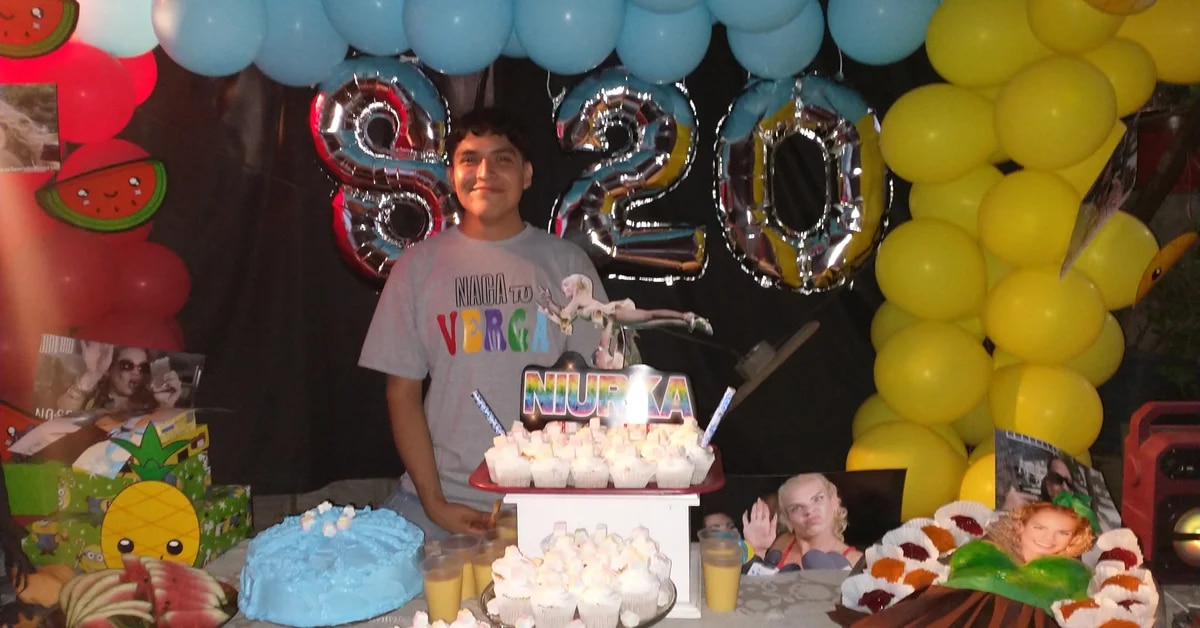 When it is decided to have a thematic party, generally a specific time is chosen, costumes are requested or in the case of children, it is usually made of a cartoon character; but nevertheless, Edwin Rojas and his younger brother threw an extraordinary party, since they chose Niurka as the protagonist.

The original publication was made in the public Facebook group Open TV Posting: Paty Navidad Edition 2.0, a space dedicated to talking and making memes on Mexican television, therefore, quickly the photos of the double birthday party went viral on this social network.

The celebrated happy to have their Niurka party, the artist they admire the most (Photo: Facebook / Edwin Rojas)

“My little brother and I We decided to have our party themed with the mighty Niurka Marcos. Let me clarify that my little brother turned 8 and I was 20, we got along for 4 days ”, wrote in this group the young Edwin Rojas, originally from Tijuana Baja California.

It should be noted that the publication has already reached almost 10 thousand reactions and went shared more than 5 thousand times. The viralization and support from Internet users was so great that the images of the theme party reached Niurka, who shared the publication this January 1 on her official Facebook page and wrote “THANK YOU BEBENIUS!”

Even the sweets were decorated with the face of Ninel Conde (Photo: Facebook / Edwin Rojas)

Infobae Mexico contacted the birthday boy directly to find out how his admiration for Niurka led him to throw a themed party, so Edwin expressed that he began to like the dancer when his high school friends showed him their videos.

Later, the teenager showed Niurka’s music videos to his younger brother, who even learned some phrases from his new idol. Having the shared taste for the dancer and their extremely close birthday dates, they both decided Have the t-shirts and the piñata made in the shape of Niurka to celebrate her party.

It was on December 29 that the 20-year-old published several photographs to share your celebration with other Internet users; In the first image, Edwin Rojas posed in front of a colorful balloon arch wearing a T-shirt with the phrase “Naca tu verg *”, which Niurka used to express herself around 2020.

On the other hand, the 8-year-old boy’s shirt said “Do you dance?”, another phrase used by Niurka. In each photograph, the Tijuana brothers looked happy and proud because they managed to make their favorite artist’s party.

This was the decoration of the party that went viral after being published on Open TV Post: Paty Navidad Edition 2.0 (Photo: Facebook / Edwin Rojas)

That was just one of the details related to Niurka, since the boy also printed photos with memes of the singer and even put her face on the bags of chocolates that she handed out to her guests.

The base of the cupcakes that were distributed on Edwin and his little brother’s birthday was also decorated with a picture of Niurka during a dance and his name imprinted in the colors of the rainbow.

The jelly of the celebrated (Photo: Facebook / Edwin Rojas)

Even the jelly that the guests of this peculiar party enjoyed was “dressed” as NiurkaIt had the shape of a woman and the face of the actress also on the doll’s head.

In another of the photographs, the birthday boys posed next to the piñata that Edwin had made, which was shaped like Niurka and had the phrase “Be quiet! She is not like that. She is my personal friend and I have been to all of her children’s birthdays ”.

This is the piñata that Edwin made (Photo: Facebook / Edwin Rojas)

Said phrase made reference to her participation as a judge in the program I am your doubleOn that occasion, a participant imitated Gloria Trevi, which Niurka Marcos did not like because she did not consider it to be really similar.

The peculiar party aroused the liking of thousands of users, who made comments such as “I want a party like this” and “have you seen your shirts? is it so top”On the other hand, many people tagged their friends as they wish a similar celebration on their next birthday.

Itatí Cantoral, Maribel Guardia, Niurka: this is how the “Adventurers” of Carmelita Salinas said goodbye
“You didn’t grow up because you were very arrogant”: Niurka answers Bobby
“My bottom is not wrinkled”: Niurka detailed the day she met a drug dealer