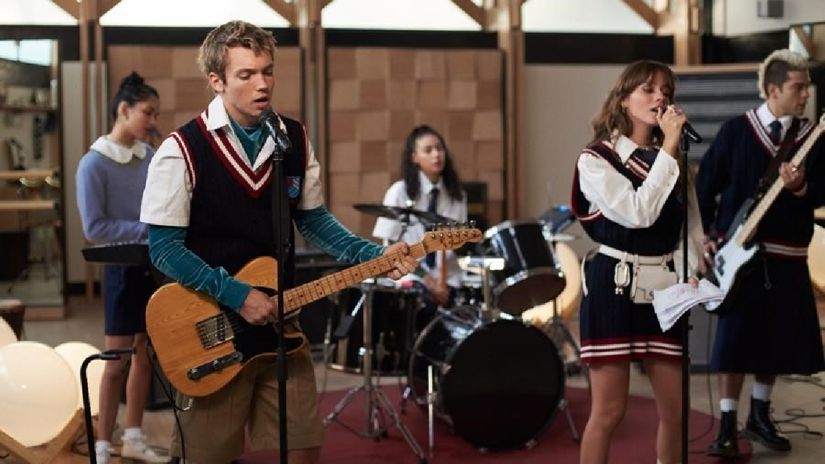 Netflix just released the final trailer from “Rebel”, the new adaptation of the Mexican franchise with a completely different story, where the new generation of Elite Way School students will have to demonstrate their musical talent in order to win the anxiety Battle of the Bands.

However, not everything will be new in this version, since it has been confirmed that it will have the participation of Estefanía Villareal, again playing Celiina and Karla Cossío, who returns as Pilar Gandía, one of the former students of the Elite Way School.

The story will lead us to the new group of freshmen, who will try to find the best members to form their own bands while a secret society (the lodge) seems to be back in the EWS to thwart the musical aspirations of the new students.

One such group is made up of the self-centered Luka Colucci, the famous pop star Jana Cohen, the talented songwriter Esteban, the confident drummer Andi, the friendly rapper Dixón and the cheerful and innocent MJ, who along with the other bands, will be evaluated. by Sebastián Langarica and Emilia, two of the school’s most outstanding students.

What is the new version of “Rebelde” about?

More than a decade has passed since we were able to enjoy the musical series that captivated thousands of fans in the early 2000s, through the Argentine version “Rebelde Way” and the Mexican version “Rebelde”.

Now Netflix brings us this new series, which will be full of moments of musical nostalgia and which also highlights the return of the remembered former student Celina Ferrer, a character that Estefanía Villareal gave life in the Mexican version, who is now the director of the Elite Way School, confirming in this way that this story will be set years after the success of the musical group RBD.

When does “Rebelde” premiere on Netflix?

The first season of “Rebelde” will arrive on January 5, 2022, through Netflix.

Netflix ‘Rebelde’: Netflix launches the final trailer of the new version of the series