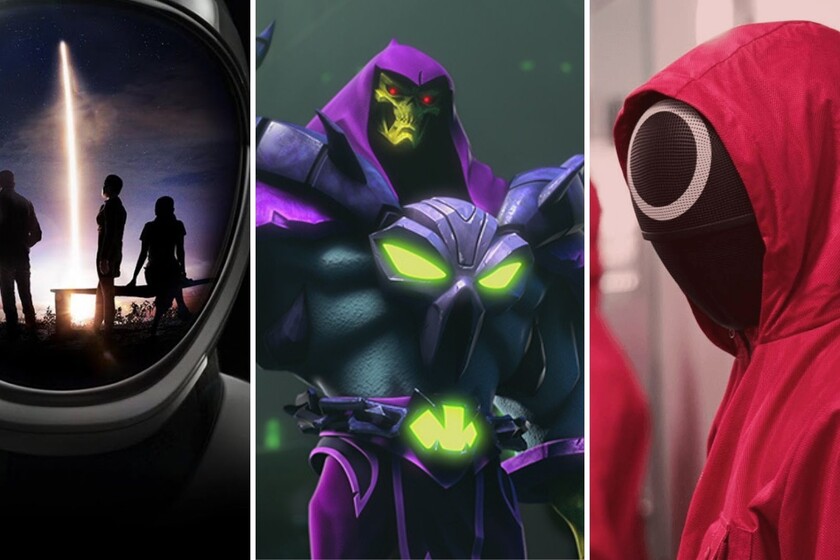 Netflix brings a few news for the start of the 2021-2022 academic year that intends to keep us glued to the couch all month. From a new reformulation of the Masters of the Universe to a documentary that will cover the first steps in space of a group of four civilians. A September where everything has a place, as our review of the programming shows of the month.

‘He-Man and the Masters of the Universe’

After success (and controversy) from Kevin Smith’s adaptation of the toy franchise, a second version arrives, with a more clearly youthful orientation and a futuristic setting. We are going to a future Eternia and 3D animation, but the constants of the saga are clear: Adam transforms into He-Man, Skeletor wants to conquer Grayskull and friends of one and henchmen of another face in an all-out fight.

We are very intrigued by this curious Korean series that presents a future halfway between the colorful dystopia, the trap of ‘Saw’ and a particularly sinister episode of ‘Yellow Humor’. Hwang Dong-hyuk has written this series in which 456 people willing to do anything to get out of their financial problems agree to participate in ‘The Squid Game’. The winner will win forty million dollars and the rest die in this macabre test based on a popular children’s game.

All Netflix series in September

One of the most powerful movies of the month on Netflix is ​​this action bomb starring the increasingly forceful Mary Elizabeth Winstead, now an action hero to follow closely. Woody Harrelson accompanies her on a frantic chase to locate the person responsible for carrying a poison in her blood that will kill her in 24 hours.

Netflix seems to be getting a taste of youth horror and we can only celebrate it if the result is products as fun as the three ‘Fear Streets’ that we have enjoyed this summer. Here, Sam Raimi produces a story in which the inimitable Krysten Ritter (Jessica Jones) is a witch who demands a couple of kids who have fallen into her clutches to tell her a scary story every night to survive.

All Netflix movies in September

A peculiar experiment, a mixture of documentary on space exploration and reality, and also an experiment that can be followed almost in real time: that of Inspiration4, the first mission to send only civilians into space aboard a SpaceX rocket. On September 6 the four members of the crew will be presented in two episodes, on the 13th another two will be broadcast on training and preparations, on the 15th the takeoff will be able to be followed live on YouTube and a last episode at the end of September will summarize The mission.

All Netflix Documentaries and Comedy Specials for September