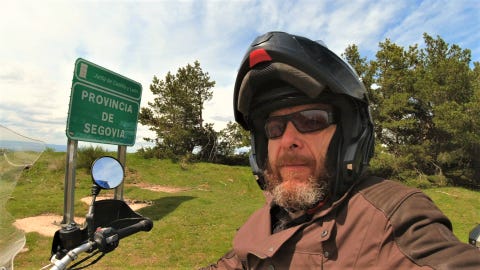 By now, especially if you like travel documentaries on wheels, chances are good that you know Mike Silvestre. The adventurer and biker, writer and creator of the famous series Diario de un Nómada and other motorcycle travel programs is already preparing his return to television with his new documentary series: “El Nómada de la moto”, a journey that will take us through some of the least traveled areas of Spain and Portugal to learn more about its landscapes, its people and its gastronomy.

A rediscovery of the Iberian Peninsula

The reason for a trip now so “close” to home after years traveling to the most remote corners of the globe has a fairly obvious explanation. The pandemic and its foreign travel restrictions opened the door for him to re-explore some of the closest but often forgotten corners of our territory.. “After many years traveling the world, the pandemic has given me the opportunity to rediscover the Iberian Peninsula,” explains the adventurer.

So Miquel Silvestre now proposes a new journey that will start in Empty Spainthrough Soria and its Laguna Negra, through the Sierra de la Demanda in Burgos, through Gredos in Ávila or through the Barrancas del Burujón in Toledo, the so-called “Spanish Colorado Canyon”.

Also will take us along the banks of the Duerofrom the Arribes del Duero in Salamanca to its mouth in Porto, and once there will take Estrada Nacional 2 to cross neighboring Portugal from north to south and then return to Spain through Huelva and Extremadura.

New traveling companions and some veteran

This new trip will be made with some old well-known mounts such as the Atrevida motorcycle, with which he already traveled around the world in 2012, but also with Etheria, which receives its name from the first Spanish traveler in the fourth century BC. Next to them there will be a third motorcycle still unbaptized.

‘El Nómada de la moto’ will premiere with a double chapter next Tuesday, May 10 at 10:30 p.m. on the Odisea television channel, available on the main cable television platforms -such as Movistar+, Vodafone or Orange TV-. It will be the last production of a tireless traveler who is also present with other programs on Amazon Prime Video and in its space on Radio 5 ‘Around the world with Miquel Silvestre’ and which is also promoting its own OTT platform, Nomad TVin which you can see the rest of his productions to date, unmissable content for lovers of motorcycle trips.

Miquel Silvestre returns to the roads with a new series