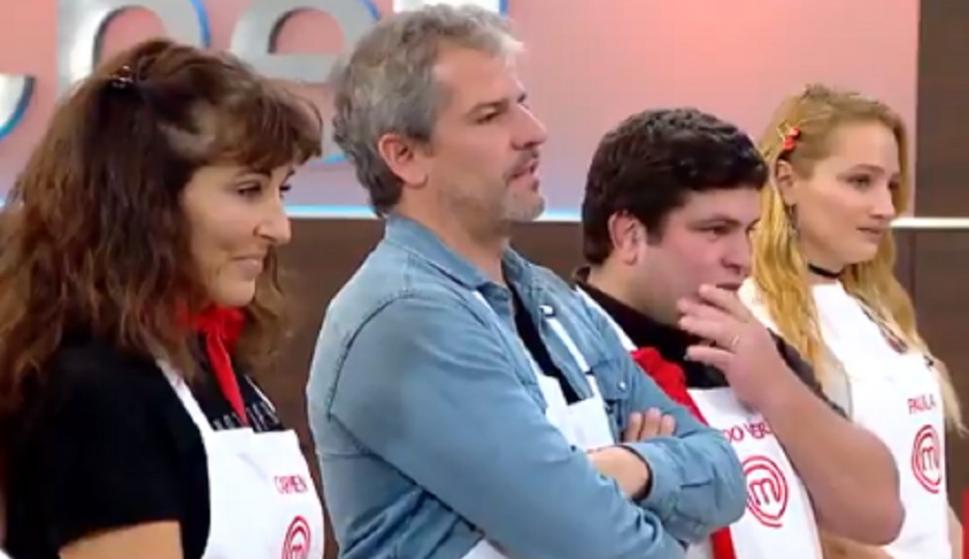 Tuesday’s was an evening full of emotion and good food in the second season MasterChef: Celebrity Uruguay. The broadcast was crossed by personal stories, pairing with wine and preparations that, in many cases, were associated with comfort food or a well-home kitchen.

The playful element was not lacking either, and this was present in the benefits test, where the eight participants had to prepare a dazzling plating but with one difficulty: they had to work on taping, so they only had two out of four hands.

Those who best dodged that challenge were Sebastián Almada and El Gordo Verde, who had the benefit of choosing, in the elimination test, with which wine variant each contestant was going to have to work.

It is that at the time of the kitchen, the slogan was twofold: it was necessary to prepare a dish dedicated to that moment when the competitors’ careers changed forever, with the addition that the elaboration had to pair perfectly with the wine assigned. To evaluate this second aspect, the chef Mercedes “Mechi” Deicas.

The test was preceded by the most emotional moment of the season so far. The thing is Sergio Puglia, Ximena Torres and Laurent Laine They presented the eight celebrities with a series of videos with greetings from loved ones. This is how Emiliano Brancciari from No Te Va Gustar, who dedicated a few words to his bandmate Denis Ramos; Pichu Straneo, who recalled a nice anecdote with Almada; Patricia Madrid’s father, who moved her easily; Cristina Morán, who dedicated sweet words to her daughter Carmen; Carolina, the sister of Patricio Giménez; Maru Botana, friend of Gordo Verde to everyone’s surprise; and Paula Silva’s grandmother and mother. The icing on the cake was Pablo “Canario” García’s message for Marcelo “Pato” Sosa, who couldn’t hold back his tears when talking about his family and friends.

To finish off the strong moment, Puglia confessed: “I have been seven seasons. What is happening to me never happened to me now. They broke me each of you with your true stories. ”The commotion touched everyone in the studio and cried up Laurent Laine, the toughest of the juries.

After an hour of work and with the tensions, nerves and obstacles typical of a test of this instance of MasterChef: Celebrity, Carmen Morán She was the first to present her dish, an aubergine parmigiana that was paired with white wine. She worked comfortably and relaxed, she said, and only got very good feedback. It would end up being recognized with the mention of the best dish of the day.

Generally speaking, the return was also good for the team priest, who made a medallion of beef eye wrapped in red wine onion marmalade. They highlighted the cooking of the meat and the intelligent use of the ingredients, although they pointed out an excess of sweetness in the jam. Then they asked him to give more.

Paula silva He stood out again, this time with a goulash with spaetzle paired with cabernet. “I am very admired that you are a vegetarian and still have a meat test,” Ximena Torres told him. “Talk about how you want to be here and want to transcend,” he added and finished: “it is worthy of a professional cook.”

Another that stood out was Sosa Duck, with a lentil stew with red chorizo ​​and bacon accompanied by a chopito that, according to him, would have made the Canario García hit the walls. “This is a transmission of gustatory memory and it is reflected there,” said Puglia and Laine, who had been critical when she had seen him work, admitted: “The truth is, the stew is very good.”

Almada, as always, was very confident with his dish, which this time was a filet mignon wrapped in bacon with mushroom cream. They told him that it was correct and Torres asked him to go out of his comfort zone for the next time, which, due to what has been done so far, are meats with creamy sauces.

Denis Ramos, that on the last show I had disappointed with a failed risottoThis time he returned to his good level with a Lima cause of tuna with Huancaína sauce. It had the disadvantage that, due to a matter of time, it did not get enough sauce to supply the dish, which, according to the experts, was the star of its realization. “When you taste it as you brought it, it is one thing, when you taste it with the sauce it is another 10 times better,” Laine pointed out. “The interesting thing is to see you recover the route,” added Puglia.

To close, it was the turn of the Patricians who presented important problems. Patricia Madrid He made pork schnitzels with sweet potato quenelle and they pointed out several defects. Torres’ summary for one of the most outstanding participants of the season was: “This dish is forgettable in your gastronomic career.”

In the case of Patricio Gimenez, their salmon tartare with avocado was a good idea poorly executed. “It tastes like raw salmon,” was Torres’ main criticism, and several more from the rest of the jurors joined in. With that, it became clear that between the two of them would be the removed from MasterChef.

Finally, who left MasterChef: Celebrity Uruguay was Patricio Giménez. He said goodbye happy and eager to abandon the recipes and pick up the guitar, he said: “I was needing that.”

“MasterChef: Celebrity”: the night that made Puglia break and Laurent Laine cry