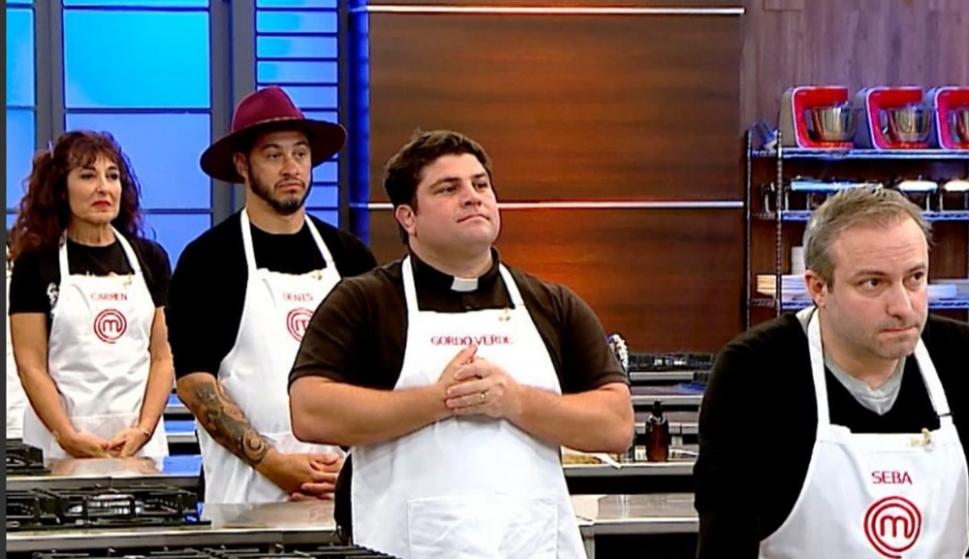 Five, only five participants remain in this second season of Masterchef: Celebrity. The musician Denis Ramos, the priest Fat Green, the actress Paula silva, the actress Carmen Morán and the humorist Sebastian Almada They are the ones who are still in the race and now they looked for their place in the semifinal.

Before starting to cook, a stuffed animal machine determined the help for the participants. According to the color of the bears they managed to get out, it was the profit. There were five minutes of help with Sergio Puglia, with Laurent Lainé, with Ximena torres, also extra minutes for a participant and less time for a rival. Neither wanted to go for that last benefit.

One by one they tried the game, and only Carmen Morán was the one who managed to get the stuffed animal first and get five minutes of assistance with Puglia. Ramos won the assistance of Lainé and Verde, that of Torres. Almada and Silva were unlucky and were left without privilege.

After that relaxed moment, the participants had to enter the room one by one to discover a surprise that would help them, said the jurors, and that was hidden under a huge box.

This time it was not a preparation, ingredient or recipe, but a moral and emotional support from their relatives. When lifting the box, the green fat man found his mother Graciela and Almada, his youngest son, Joaquín. Carmen Morán was surprised with her youngest daughter, Denise; Ramos with her little daughter Zoe. And in Silva’s was his mother, Mabel.

It was an inspiration worthy of a MasterChef final, after which celebrities were asked a recipe that should include cream cheese. And as the relatives watched from the balcony, the five of them began to cook.

So were the returns

Sebastián Almada was the first to bring the jury his dish, a cheese fondue presented in a cabutia squash. “Very nice everything you did, good job,” Lainé told him.

El Gordo Verde made a curried chicken tikka masala that got all the praise. “It’s incredible. It has a lot of spice, but everything is in the right measure. It has a lot of punch. It is a super different dish from what you have made,” Torres commented. “The plate is superb,” ​​said Puglia.

Denis Ramos was confident with his dish: potato stuffed with smoked salmon that at first glance looked very much. “I saw you focused and enjoying what you were doing,” said Puglia, starting the returns. “I liked the combination of flavors. It’s tasty, it’s nice,” Lainé said.

Carmen Morán arrived with a picturesque canollo of zucchinni. “It’s a fantastic idea. You can see all the flavors and balance; the presentation, everything perfect,” began Puglia. But – “there is always a but,” he said – it lacked an oil to accompany it. “That final touch would have been divine. It’s a sophisticated entrance,” Torres said. “A very nice plate, a very good job. I congratulate you,” Lainé finished.

Paula Silva introduced pears to red wine. “I dedicate it to you,” Silva told Puglia, who was the first to try his favorite dessert. “It’s a mega dessert. It has everything you need to have. It’s a restaurant dessert worthy,” Torres said. Puglia and Lainé also praised this preparation and between the three of them they devoured what was done by the actress.

“Earlier we told them that there was another surprise left, that it will be divided in two: the best dish becomes the first semifinalist of Masterchef: Celebrity. And the second: today no one is going to be eliminated, “commented Puglia. And as soon as the news was known, everyone celebrated.

Carmen Morán also went up to the balcony after hearing the praise of the trio of jurors.

“Paula and Gordo Verde, a step forward. Their dishes in this test were superb, worthy of a final,” began Puglia, although only one of them became the first semifinalist.

“Your plate was exceptional,” commented Puglia. “The dish had nothing to envy any chicken tikka masala in London or India,” Torres said.

“What is left over is love,” Green began by saying thanks. “I thought about pleasing my old man, and it is a privilege when one discovers from the old men that example to follow. In my house, in the kitchen, the example is my old man,” said the priest before going up to the balcony.

In the next instance one of the participants will have to leave the kitchens and the second semifinalist of this season will be known. But that remains for the following week.

“MasterChef Celebrity” has already found its first semifinalist: meet him