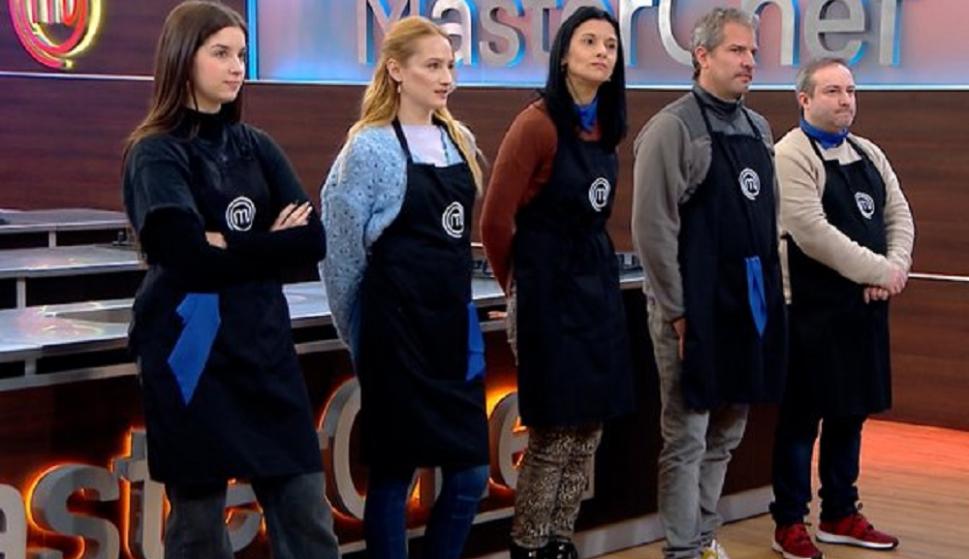 With a gastronomic Pictionary that made it clear that these celebrities cook better than what they draw, a new installment of MasterChef: Celebrity Uruguay. They played it in pairs defined by the jury — Sergio Puglia, Ximena Torres, Laurent Lainé — and that combined the members of the red team with the blue team.

Then Patricia Madrid and Patricio Giménez, Pato Sosa and Claudia Umpiérrez, Carmen Morán and Sebastián Almada, Denis Ramos and Agus Padilla, and Paula Silva and El Gordo Verde joined. The first ones won, cheating through, and that gave the singer a benefit. It is that at this stage only the competitors of the blue team had to work, and those of the red team, who had won the test of the past program, they went straight up to the balcony.

When it came to introducing the challenge of the day, the celebrities met other celebrities in a series of picture frames that determined which dish each would have to prepare.

The preparations were diverse, they looked appetizing and were made nervously in some cases and with great confidence in others. Almada, for example, was so confident with the lamb that he ended up playing with his food, literally, with some of his companions on the balcony.

At the time of the tasting, the first to come forward was Claudia Umpierrez with a Borsch soup (with sour cream and cabbage) which was apparently Lady Di’s favorite. It was also the dish that Patricio Gimenez, who with her benefit was able to exchange it for the spaghetti with meatballs that had gone to the referee. It did well, although it went overboard on the sour cream and the beet flavor lacked punch.

And Padilla She made a mistake that, she said, was unforgivable: she had to make the Marengo chicken that Napoleon Bonaparte liked so much (or so the jury said), but the chicken in question was raw. Everything else – the consistency of the sauce, the first fried egg he made in his life and above all, the handling of the seasoning – was praised by the specialists.

She was not the only one who had problems with cooking. Giménez, despite the use of the benefit, worked in a disorganized manner and when Ximena Torres cut the meatballs she found that the meat was raw. “I am very sorry to find that meatball in front of all the other work that is very good,” the cook told him and left the Argentine, who is usually very answering, speechless.

Before, Sebastian Almada he had boasted of a lamb ragout with which, he assured, he could have achieved a night of passion with Marilyn Monroe, the star who shot the plate that fell to him in luck. “You are quite enlarged,” Laine pointed out, who was very amused by the detail of a carrot flower. “In an hour you did a very good job. It lacks a little seasoning and a little more strength,” said Puglia.

But the great protagonist was not that lamb that was cut without a knife, but the plate of Paula silva. The actress, who had warned that she was very emotional, could not contain her tears when Lainé told her: “I don’t feel like giving you a refund. I don’t want to criticize. Thank you.” To calm the participant’s annoyed face, the Frenchman clarified that he had loved his mac and cheese with battered stuffed breast, a recipe inspired by Muhammad Ali.

“Your plate is great. You showed people at home that mac and cheese can be a great silverware,” Torres continued, much more enthusiastic. To top it off, Puglia wanted to define the job with a single word, the most coveted of all the competition: “¡¡Hallelujah! “. Paula went straight to the balcony, to the applause of her companions.

In the end, Padilla and Giménez had to measure themselves in a new gastronomic challenge to define who was going to be the new eliminated from MasterChef: Celebrity. They had to make three empanadas each, dough included, in just half an hour.

Ultimately, the jury voted individually and the best empanadas were those of Giménez. A) Yes, the new eliminated from MasterChef was Agus PadillaBut the decision made both of them cry and the singer, through tears, assured that he would have preferred to leave. “Taking Agus out is almost bad news,” he said and that was valid for everyone, who dismissed the young artist with warm applause. Only nine are still in competition.

“MasterChef: Celebrity”: from the dish that achieved a new “Hallelujah!” to the most emotional goodbye