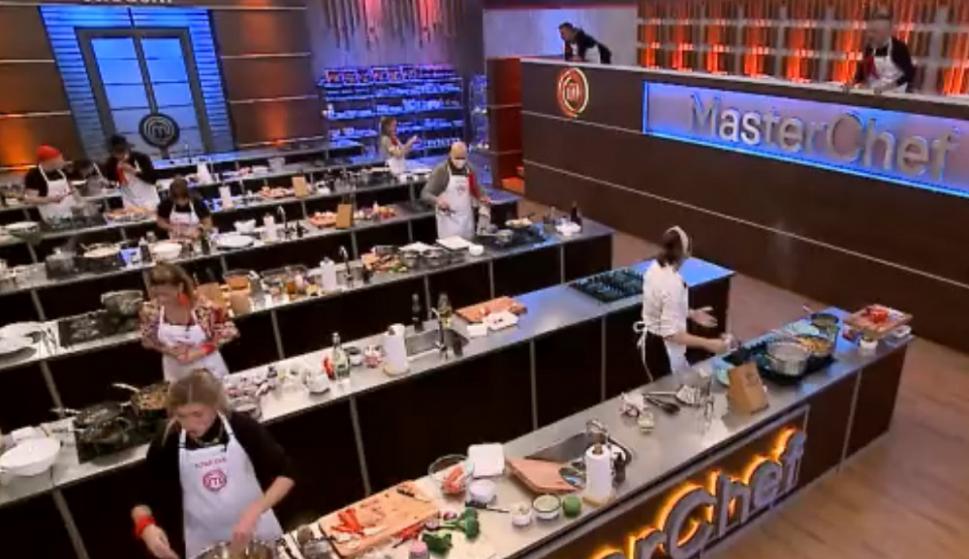 The kitchens of MasterChef: Celebrity Uruguay they lit up in a new season from the competition. Auditions passed23 of the 32 participants continued in the race; They were divided into two groups and, it was announced, the best five from each team will be those who will qualify for the final stage of the competition.

“They have to take it as great fun and enormous enjoyment,” was one of the advice he gave him. Sergio Puglia to those present before, with his fellow jurors Ximena torres Y Laurent Lainé, will present the theme of the day: Asian cuisine.

Some fortune cookies defined the conformation of four subgroups that had to overcome an initial challenge. As if it were a post race, three members had to move 12 pieces of sushi from one end of the table to the other, but they could only move them using traditional Chinese food chopsticks, that is, without touching them. with the hands. Pato Sosa, Moré and Ramos were the winners of an important prize: they got out of the elimination test and went straight to the balcony.

The rest had to get down to work on a typical Asian dish, of their choice. Sixty minutes after having passed through a supermarket where the nerves were felt, the processes and results were the most varied and in the end, the least achieved dish determined the first eliminated from season 2.

The challenge had everything: a cappella songs, accidents and even a peak of anxiety, like that of Josefina Damiani when she realized that she had forgotten the rice to prepare her wok. The agropop singer did not have an easy night because after overcoming that inconvenience, she used powdered ginger believing it was white pepper and went too far with the amount of soy sauce. He painted for the worst ending, but it was not like that.

Damiani received 10 minutes of help from Pato Sosa, a committed kitchen assistant. Moré collaborated with Infante, who was injured while cutting vegetables but kept his good humor and solidarity intact – he lent ingredients to everyone – and Denis Ramos demonstrated his culinary skills by giving good advice to Lali Sonsol.

The first to present his proposal to the jury was El Gordo Verde, who did not win the “Hallelujah!” from Puglia but almost. He made a Japanese fried chicken, in which he applied the knowledge acquired on a trip to Japanese lands to play rugby with the Uruguayan team. “The flavors really carry,” praised Ximena Torres and that’s a lot. Lainé congratulated him.

Infante did not lose his smile when the jury pointed out all the mistakes he had made in its preparation. The main one? He made a wok but did not cook in a wok, and the rice noodles were too similar to Italian noodles, when in truth “they are not chewed, they are swallowed”, as taught by Puglia. The viewer can keep that tip.

Damiani’s turned out to be an irregular plate, the jury said, but with just enough to ensure his permanence in the competition. Carmen Morán also received a mixed return, but in general they highlighted the use of condiments beyond the fact that her recipe was not the most attractive.

Patricia Madrid took a risk with a pork curry with coconut rice on onion tempura, a dish that achieved what has rarely happened in MasterChef: a coincidence in the opinions of Lainé and Puglia, who had not realized that he had used almost no salt. That speaks well of her preparation, which kept her in the contest.

Then it was the turn of the other Patricia in the group, rally champion Pita, who offered a bittersweet wok chicken with curry rice that only received compliments. So much so that Lainé, who is not a fan of bittersweet, commented that everything was “very good.” Torres even pointed out “a signature touch” in the use of his barbecue sauce. A promising debut.

Sonsol, a repeat offender in this MasterChef, he was very confident and full of enthusiasm to present his plate, but the jury destroyed it. Their chicken curry was criticized for the excess tomato and the lack of vegetables and greens. “It’s a tomato sauce with a little chicken,” Lainé summed up, and with that synthesis the reporter’s fate hinted at the reality show.

The last to be tried were Gerardo Nieto, who made a vegetable stir fry with chicken, honey and fried rice; and Vanina Escudero, with her pork wok on a mattress of rice and sweet and sour orange sauce. The criticism they received felt more constructive than lapidary and that was it.

In deciding, the jury noted that the trend was to go to the commonplace of Asian cuisine — lots of chicken, lots of rice, and lots of wok; little creativity— and he agreed that the most successful dish of this first elimination was that of El Gordo Verde. He went up to the balcony followed by Pita, the other prominent figure on the stage.

Madrid also went up to the balcony, in this order (they highlighted “the good idea, the risk, the enthusiasm when it comes to working and intelligence”); Morán, Nieto and Escudero, who were “far from perfect” but had some remarkable points.

Of the three worst, Damiani climbed to the balcony and in the defining heads up, the jury announced that the first eliminated of the season was Lali Sonsol, who will debut on Sunday on Channel 4 with Let’s go up, it’s Sunday. He left the program after listening to an emotional speech from Puglia, which celebrated the good humor and the vibe that he put on the reality show despite the difficult year it has had, in reference to the death of his father, Alberto Sonsol, a figure Channel 10.

The chef’s words ripped off tears Among several on the balcony, but Lali decompressed with a couple of funny comments and a very energetic goodbye, true to his style. It was the finishing touch of a start that made it clear that although it is television, in MasterChef everything is lived on the surface.

“The joy that Flor Infante advances, the words of Patricia Madrid and Pato Pita, the cantarolas with Jose Damiani and Gerardo Niet, the fights with Robert Moré, the anecdotes with Gordo Verde, Pato and Denis … That was MasterChef: Uruguay for me, “Lali wrote in an Instagram story, as soon as the broadcast ended.” Thank you production, thank you jury, thank you colleagues, thank you Channel 10 “.