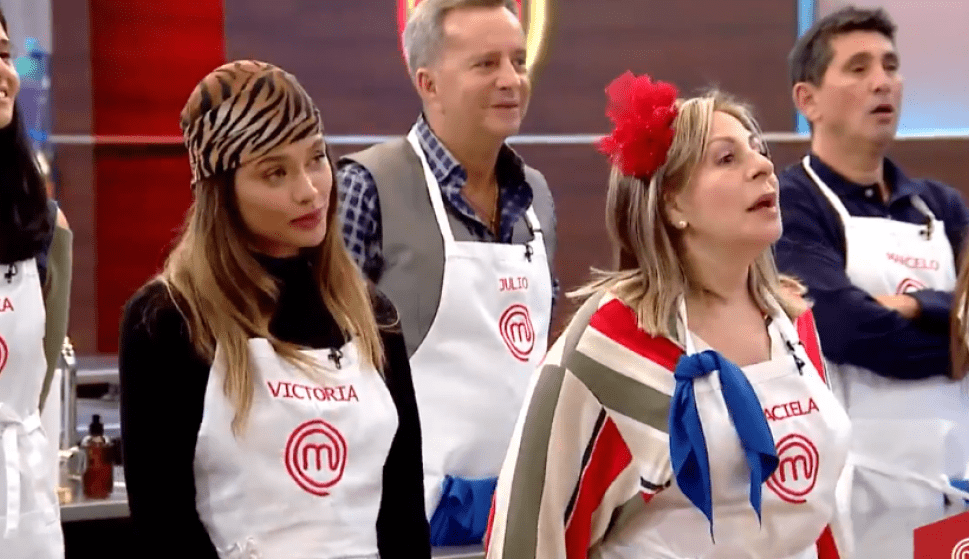 “I see the bells and it is total intrigue”, said, surprised, the DJ Paola Dalto just entered the study of MasterChef Celebrity 2, the second season of the culinary contest of Canal 10.

But that was not the only surprise that was experienced at the beginning of Tuesday’s broadcast, because the actor Robert Moré, a member of the red team, burst onto the set to join the blue team. “I come as an infiltrator,” he commented with a smile. As explained Ximena torres, one of the jurors, his arrival was due to his absence in the previous program.

Therefore, the actor of The theory of broken glass had to cook with the team formed by Sebastian Almada, Graciela Rodriguez, Julio Rios, Victoria Saravia, Patricio Gimenez, Claudia Umpierrez, Marcelo Capalbo, And Padilla, Paula silva and the already mentioned Dalto.

Blue Team is back! 👩‍🍳🔵 And celebrities are already intrigued by today’s challenge! 🙌 Stay in @canal10uruguay the screen came on. 🔥📺 Join the conversation using the hashtag 👉 #MasterChefUY@pugliainvita @ XimeTorres8 @elfranchuteji @bbva_uruguay pic.twitter.com/NScpAnsBt9

The elimination test was quite a gamble for the participants. “They are going to compete from their places before cooking,” the jury told them. Sergio Puglia pointing to those bells that surprised the DJ. “But to get their ingredients, which will be proteins, they are going to have to buy them,” he added. However, the payment method was not based on money or material goods, but on the most valuable thing for the players: their cooking time.

Before starting, Puglia made an announcement: Saravia and Rodriguez, which in the last broadcast of MasterChef Celebrity They achieved the best dishes of the night, they were saved from the test and went straight to the balcony. After the celebration of both to the shout of “Separated at birth!”, The moment of the auction arrived. Everything was in charge of the auctioneer Silvio Rienzi, driver Who gives more?.

The first protein was ossobuco, for which Dalto lost 25 minutes of his 75 cooking time after pushing against Moré and other participants. “As this is tough meat, you will have the help of Vitto Saravia for 10 minutes,” clarified the auctioneer.

The rest of the ingredients had the following cost: 30 minutes for the pork rib, which was left to Almada; 10 for the majuga (Capalbo); 45 for the loin (Gimènez); 40 for the liver (Ríos, who won the help of Rodríguez for 10 minutes); tomahawk (Padilla), 35 for the pork tenderloin (Umpiérrez); just 5 for the whiting (Silva) and 30 for the entrails (Moré).

After an intense cooking stage, which included accidents (Ríos was cut off and Almada was burned with the oven), the tasting arrived. The first to pass was Padilla, who presented a tomahawk with barbecue sauce and mashed potatoes. “I have a lot of faith in myself,” said the singer of “It caught on.” And he was not mistaken, because he received warm comments. “You made a good seal and the doneness was very good. The barbecue sauce was very good,” he said. Laurent Lainé.

Umpiérrez presented his sirloin medallions with mashed potatoes and orange sauce. Although the referee was in agreement at the time of presenting her result, Torres criticized the sober presentation of the dish, while Puglia commented that the point of the meat was not good enough.

Hands up! 🤲😅 Some participants have blind faith, and others did not even taste the dish! 😲🍽 Who will go up to the balcony and who will deliver his apron? 👍📺👎#MasterChefUY @canal10uruguay | @pugliainvita @ XimeTorres8 @elfranchuteji @bbva_uruguay pic.twitter.com/qpSPDft857

Susana Giménez’s brother showed a tenderloin with red wine roux and Parmesan cheese. But it didn’t go very well. “There are no seasonings, there is no sauce and the dish is not the right one,” Lainé commented. On the other hand, Silva presented a saucepan stuffed whiting. “I am nervous, but also happy,” said the actress. The three jurors agreed when mentioning that the doneness was just right. In turn, they stressed that he has taken the advice into account when cooking.

Capalbo opted for a fried majuga with rustic potatoes and parsley sauce. “It is the type of dish that, well done, I love to eat it. The frying is perfect, but the potato lacks the point. I like the production of your dish a lot and it takes me straight to the summer,” said Torres. “At last someone cut my lemon well,” Lainé added with a smile, before the former player was applauded by his teammates.

Ríos presented a liver with onions with mashed potatoes. “I left my soul on the court,” said the sports journalist, his apron stained by cooking. “It was a soup plate,” Lainé commented, adding that the puree was not good enough and that the liver lacked flavor.

Moré brought a grilled entrails with vegetables. The jury told him that the meat lacked sealing and that the vegetables did not achieve the right point. However, their presentation and the idea of ​​their dish stood out.

Dalto presented an ossobuco with red wine with puree. However, not having tasted his dish caused him several problems. “The meat is tough,” Torres said; “It doesn’t taste like anything,” Lainé launched. Finally, Almada presented a pork chop with carrot and mushroom puree. “Pork can be eaten well,” commented the French jury. “It is a balanced dish, a good point and a good set,” added Puglia.

After a commercial break, it was time for the jury’s verdict. Almada achieved the best dish of the night, although Padilla and Capalbo also received warm praise from the chefs. After a threat of elimination to Moré (“This was your last elimination test,” Torres told him jokingly), the actor was released from the penalty and will return to the red team. Silva and Giménez also went up to the balcony.

Dalto, Ríos and Umpiérrez did not have the same luck. “Their dishes were the least successful of the night; any of the three could leave the kitchen,” Lainé commented bluntly. But, finally, it was Dalto who had to leave MasterChef Celebrity 2. “Paola, we loved having you here, with your joy and your energetic looks”; Torres told her before firing her.

Before leaving her apron on the table, the DJ thanked the opportunity to participate in the program and assured that Almada will be the winner of the second season of the Channel 10 reality show. We will have to wait to confirm if her omen is correct.