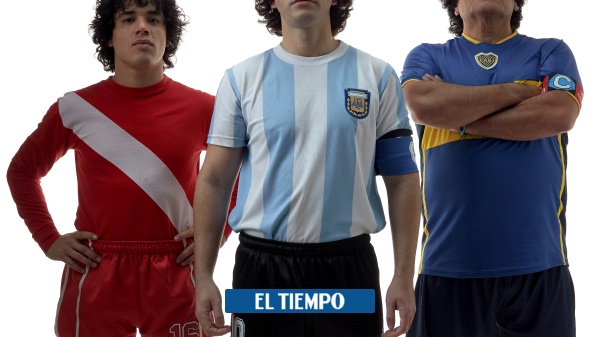 On November 25, 2020, the world was paralyzed with the news of the death of Diego Armando Maradona. Surprise, amazement and even controversy surrounded the outcome of the great Argentine soccer star, contrasted with the recreation and review of his life in documentaries or specials that were dedicated to reliving his exploits on the field and his chiaroscuro in his private life .

“They do not delay in making a series” was the phrase of some before the dimension of the character. The answer was Amazon Prime Video, which developed ‘Maradona: blessed dream’, a production of ten episodes in which he ventures to tell the life of the best ’10’ in the world.

Starting this Friday, the first five chapters will be available; episodes 6 and 7 will be released on November 5; November 12, the 8th; on November 19, the ninth, and on November 26, the tenth and last chapter.

(We suggest: The inexhaustible rivers of alcohol of universal literature).

To give life to Maradona, the production focused on three Argentine actors: Nicolás Goldschmidt and Nazareno Casero, who played him in his youth and middle age – from his time with Argentinos Juniors to the controversial goal with the Argentine team in the 86 World Cup. , known as’ the hand of God’–; added to the work of Juan Palomino, who assumed the role of the last stage of the footballer.

In addition to the usual physical preparation, which included long days in the gym to achieve the physical and muscular condition that the ‘Pibe de Oro’ had at the beginning of his career, as well as being overweight and increasing almost 80 kilos that Palomino had to face to be credible in his role –Maradona weighed 105 kilos–, the reality is that the challenge of being an idol of millions was not easy for these interpreters.

Everyone recognizes that there is a before and after for them, compared to what they believed, thought or imagined about the footballer.

Doña Tota, as the footballer’s mother was known, is played by Mercedes Morán.

“I think I met his most artistic side, as a ‘showman’, as a person who entertained the masses and brought them joy and emotion. So I’ve always been connected more to that place, so for the series I got closer to his football side investigating, and the truth is that I was amazed by the level of magic his football had at such an early age (…). Giving yourself the possibility of knowing more about the person and his humanity helps you to understand him, that is why the series left me with a more human image of this myth ”, says Nicolás Goldschmidt.

“There is more to inquire, more to know. It has many more twists and turns and in the end what seemed something simpler was more complex, something to always rediscover it. It seems to me that it is impossible to interpret Diego Armando Maradona without succumbing to its might and magnificence. Everything that I could know about Maradona, when I began to delve into him and contextualize him, was an added value because all the shortcomings he may have had as a child, up to an age in adolescence (in which he was able to lift his family out of poverty , could invent himself), he found opportunities to get ahead; are things that are not abundant. It is very difficult to get close to the sun without getting burned, and the same thing happens with a star like Maradona ”, adds Nazareno Casero.

(What’s more: Mohamed Salah will be a subject in the schools of Egypt).

“I am a contemporary of Maradona, I saw him at the ’79 World Cup in Japan, with the youth team, and then at different times. The series allowed me to get closer to that leather, that leather suit that Diego is in order to understand him, and this will allow new generations to understand that lifestyle, that standing up to power on duty, that 360-degree mission to contain not only a team but also a country. “

“So, both ‘Nico’ and ‘Naza’ show that part that maybe 15, 20-year-old boys did not live, they met him approaching the end and the truth is that he represented something much deeper that is given in his silences and, unfortunately, in his loneliness (…) you have to be in that game to understand it and the series is going to show us that ”, explains Juan Palomino.

One of the great doubts surrounding the three interpreters it was how to manage expectations around what people want to see or not from their idol.

“It is inescapable that it will have all kinds of reactions, as you say, throughout its history it has been that way, so this is not an exception. For my part, I could see a little of the work that the three of us and the entire team of actors, actresses and technicians did. The truth is that it is a production of a gigantic size; filmed in Argentina, Uruguay, Mexico, Spain, Italy, and with interpreters from all over the world. All this great ship is captained by the showrunner and director Alejandro Aimetta, whose vision of this character could be transmitted, and the work has been very exciting ”, Goldschmidt explains.

(You may be interested in: The ‘Guernica’ that is a sensation at the Paris Chocolate Show).

‘Maradona: blessed dream’ is available from this October 29.

“The expectation for this look from Maradona is everything, but we are calm because we have also given everything, from end to end, from the first to arrive until the last to leave. We have put everything we can and a little more to honor this story and to live up to it and be able to speak about what is known and the sacrifices that he had to live to achieve his goals. The expectation is there, because, if you let me think, I can’t find a character of the century in this era that has caused so much intrigue and interest throughout the world ”, explains Nazareno.

“We are talking about one of the most famous men in the world and each one is going to have an experience, a heartbeat, so I am glad that Amazon Prime Video has taken this idea of ​​telling his life. Maradona is an Argentine who talks about our idiosyncrasy in Latin America. He is known in the most extreme points of the world – as Messi is also known now. So we are going to take charge (emphasizing the focus that they will have throughout the world with their role) because we work seriously and with love and conviction each of the characters ”, concludes Palomino.

Juanes will open for the Rolling Stones in Dallas concert

LasTesis: Our success is global because sexist violence is universal

Part of a luxurious Cristiano Ronaldo mansion will be demolished, why?

Joshua Cavallo and other athletes who declared themselves homosexual

Maradona: the sacrifice and the myth in the new Amazon Prime series