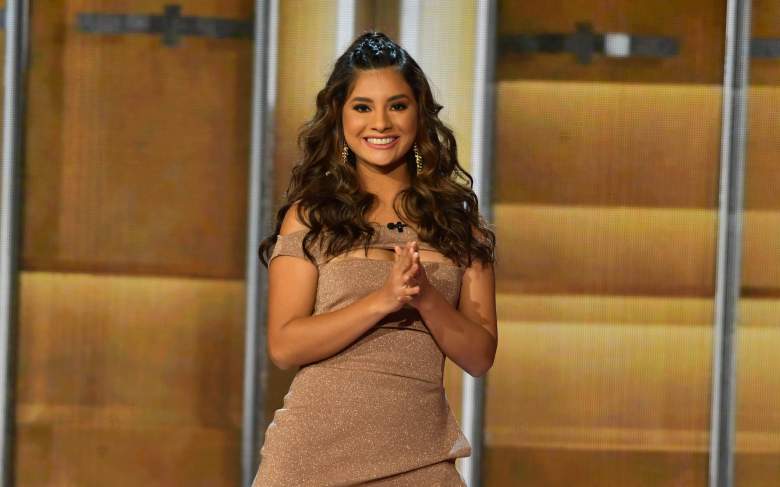 Lupita Valero is one of six lucky semifinalists from the twelfth season of Nuestra Belleza Latina, the prestigious Univision reality show that is in an exhaustive search for new talent on the television network. Below you can see Lupita Valero’s interview with NowMismo.com.

Selected from more than 4 thousand women who auditioned for Nuestra Belleza Latina, Valero is one of the two finalists who were born in Mexican territory and who later settled in the United States with her family.

If crowned NBL 2021, the 26-year-old model would win an exclusive contract with Univision to be part of the select group of talents for one of the main shows on the television network.

Throughout the previous eleven seasons of Our Latin Beauty, only two Mexican women fulfilled their dream of being crowned in the famous beauty pageant in reality show format. The first of them was Alejandra Espinoza in 2007, and the second, Ana Patricia Gámez in 2010.

Regarding the professional field, Valero She is a textile engineer and has entered the business world with a children’s clothing brand.

QUESTION: You were the target of criticism for your humble origins in your native Mexico. What message would you send to all Mexicans to make a conscience call to stop making fun of a person’s social or economic status?

Lupita Valero: “I learned a lot from that experience, the truth is that it was a response that opened many doors for me and above all, it was also a ‘stop’ to that unconsciousness that we have as countrymen or compatriots. It is unfortunate, but it is a reality. Sometimes the same people attack the same people and we do not realize that you are going to another place and they adapt, love you and shelter you as I am doing. I love Mexico, I am more Mexican than a chile, I feel super Mexican and I came to another country in search of my dreams. It is very nice when you arrive in another country and you see that there are Mexicans, Cubans, Puerto Ricans … There are so many people who welcome you and say: You know what? This is the land of dreams and here we all fit, that’s the beauty.

To my people in Mexico, say thank you very much because Mexico opened the doors for me. Mexico welcomed me, the guaraches, the values ​​and everything I have is thanks to the fact that I was in that Mexican land. I am Mexican and I am proud to be one. I only have words of gratitude for my people in Mexico, for the Mexican women who feel identified with me, because I have not seen the messages right now, but I hope in God that at least my message reaches a woman or a girl, my neighbors with whom I played in my neighborhood and say: ‘Lupita could, I can do it.’ And then nothing, pure gratitude ”.

QUESTION: You have been a spokesperson at conferences to empower women entrepreneurs, but some of your NBL colleagues have left it in doubt that you are trying to overshadow or not let the rest of the candidates shine, which contradicts that work you did in your country. Is this true or what really happens in the mansion? We as viewers may see something, but we do not know the reality that you live there.

Lupita Valero: “Thank you very much for the research because the truth is that I have to say that in Mexico I lead a group of entrepreneurial women, from a platform that I myself created so that these women, whether they are single mothers, young people or seniors and that they no longer have a job in Mexico, they can sell their products. Thank you very much for mentioning it.

I think that it is rather that the competition begins to flow, it begins to be stronger and stronger, literally we are nowhere before this ends. One may suddenly start to complain about the camera or something, but I am very attentive and I bring Mexican school. They educate us Mexicans by saying: ‘If you don’t pay attention, I’m going to go to school myself.’ I am all the time attending to my teachers, if my teacher says to me: ‘You know what? Get into the camera. ‘ I am attentive, what happens is that the companions sometimes get a little upset because they believe that I am overshadowing, but the truth is that I am focused on what they tell me. They may think what they think, but I know who I am, so this is important when you compete in something like Nuestra Belleza Latina. ”

QUESTION: If you win Nuestra Belleza Latina, to whom are you going to dedicate this triumph and why?

Lupita Valero: “This triumph, because it is already a triumph for me, to come to another country to knock on the door and come to Nuestra Belleza Latina, to prepare myself for this moment. Without a doubt, it has been a team effort. I have not come here alone, I have been working for years with people who love me and with people who saw me without me learning anything, without having experience. First of all, this dream is led by my mother, my father and my little brothers. We are a very small family, but very beautiful. My family in general, my boyfriend and his family, friends … This dream belongs to Mexico and the Mexican people who are here in the United States, to my people in California who have also adopted me and love me very much, that dream is already there being shared. This dream began to come true from the day I did my first casting ”.

Lupita Valero from NBL 2021: Why does she overshadow her teammates? (INTERVIEW PART II)