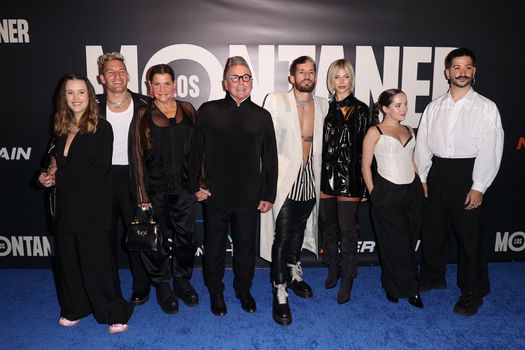 In The Montanersthe new original series docureality Coming to Disney+ on November 9, the Montaner family is revealed like never before. Throughout the five episodes that make up the first part of the series, fans will discover all the intimacy of the emblematic family, immersing themselves in their daily life and accompanying them throughout the continent in concerts, vacations, celebrations and more. The new production also presents photos and videos from Ricardo’s personal archive, who has been photographing and filming his family for decades.

These are six unmissable moments that are part of the series and that, although they had media significance and on social networks when they happened, now they are discovered like never before by the hand of their protagonists in their most intimate facets.

In The Montaners, Mau, Ricky and Evaluna join forces to plan a surprise birthday party for Marlene together with Ricardo, although everyone knows that it is not easy to surprise the matriarch of the family. The series not only records the hilarious setbacks of the preparations and the fabulous celebration, but also witnesses the emotional moments that finally take place during the celebration when a very special gift leads to discover moving details of the relationship between Marlene and each of their children.

The series also reveals the behind the scenes of the presence of the entire family at the Latin Grammy® Awards in Las Vegas, from the preparations of each member in their hotel rooms to the adrenaline of the ceremony with the minute by minute of the announcement of the winners in the different categories. In addition, the cameras record the historic moment in which Ricardo wins his first Latin Grammy® after more than forty years of artistic career.

On the way to the expected wedding of Ricky and Stef, the docureality accompanies Ricky in his process to choose the “best man” or groomsman. The audience follows episode by episode the consideration of the possible candidates, including Mau and close friends of Ricky, until the decision is revealed in a very funny way.

A ROAD TRIP FAMILY TO ORLANDO

The moments shared between the whole family are especially unforgettable. One of the funniest is what happens when the Montaners decide to take a road trip to be present at Camilo and Evaluna’s concert in Orlando. The group leaves Miami in an amazing RV and you can see how they enjoy family time. The trip also provides an opportunity for everyone -or almost everyone- to participate in a fun outdoor activity, rowing and in full contact with the flora and fauna of the area.

THE IMMINENT ARRIVAL OF INDIGO, THE DAUGHTER OF CAMILO AND EVALUNA

Camilo, the Latin American singer of the moment, and Evaluna, the youngest of the Montaners, became Indigo’s parents in April of this year. The series allows you to discover everything about the pregnancy and the expected arrival of the new member of the family, including the day-to-day of Evaluna’s growing belly, Camilo’s reflections and confessions regarding his imminent paternity, and the connection between the other Montaners with their granddaughter and niece on the way.

Finally, The Montaners reveals all the behind the scenes of one of the most viralized events of 2022: Ricky and Stef’s wedding, which took place in Buenos Aires, Argentina at the beginning of January. Those who want to know all (yes all!) the details of the great celebration have an obligatory appointment with this episode of the series.

Not only are all the preparations of the previous months shown, including the process of creating the bride’s dress and the nerves around the first meeting between the in-laws, but also everything that happened in the days before the wedding is revealed. and the emotions that each of the members of the two families experienced in relation to the great event. The minute by minute of the Judeo-Christian ceremony that united Ricky and Stefan forever also appears in the series.

After the premiere of the first five episodes of the series, the remaining five installments that complete the season will also arrive on Disney+ on December 28. There, the audience will enjoy more must-see moments from the Montaners, as the charismatic family continues to consolidate and expand, always to the rhythm of the music.

The Montaners is now available exclusively on Disney+.