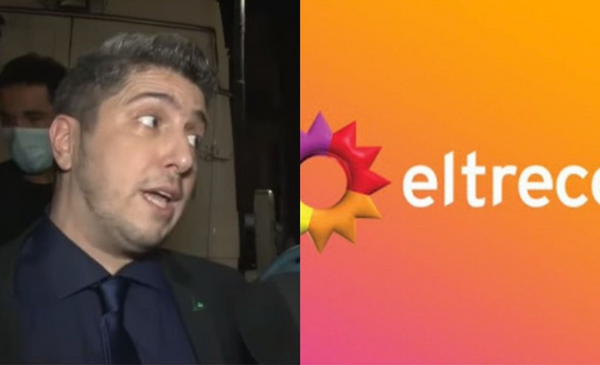 One of the main themes of the TV current open is what will he do Jey Mammón with your future job. Everything indicates that the driver of The Mammons will abandon America TV and will go to Telefe in 2022, although these rumors were never confirmed by him, by someone close to him or by the channels.

Therefore, in BLUE (The Angels of the Morning, The thirteen) they wanted to know from the mouth of Juan Martin Rago what will become of your life in a few months. However, the protagonist appealed to his usual humor and irony to get out of the way, respond with evasions and sow even more uncertainty about it.

BLUE was present at the return of Mirtha Legrand to television Argentina, a program to which the leader of The Mammons. When he came out of the study of the Clarín Group, the chronicler of the cycle of Angel de Brito He approached him and conducted a brief interview with him.

Then, the movilero wanted to know if the 94-year-old diva had asked Diego Torres, another of the guests, about the separation from his wife Débora Bello. “Yes, he confirmed it”, Told him Jey Mammón. By the way, he took the opportunity to make a joke to the journalist: “Now she’s dating me, she started something nice with me. Seriously I tell you. He began musically speaking, ´We are much more than two´, and you are going to see it at Mirtha’s. Something nice started between us. “

Jey Mammón is wanted by Telefe for 2022: what will he do with his future?

Beyond the jokes, the interviewer instantly went to the heart of the matter and hinted: “You talked about your future job …”. “Yes, it was the question that choked me at the table”the comedian acknowledged with a laugh. “What are you going to do in Telefe? Tell us well! “, the reporter challenged, although the artist got away with it: “I don’t know what will become of me in the future, I’m really telling you.”

“But the pass to Telefe is it confirmed or is it in doubt? “the chronicler insisted. “When did I talk about what I’m going to do next year? I have no idea, really!” Jey replied.

“Well, but I’m asking you …”, replied the journalist. And the answer was blunt and forceful: “Where is it going BLUE next year? When you tell me where it’s going BLUE, I’ll tell you where I’m going next year. We already talked about it the other day, don’t break my eggs! “.

“So what about Telefe is unstable “the chronicler insisted. To which Jey Mammón concluded: “Where is he going BLUE? ¡Wow!”.

Jey Mammón could go from América TV to Telefe

Everything indicates that Juan Martin Rago will go to Telefe to command a program with a totally new format for Argentina. Although it is not confirmed, in principle it would be something similar to the call Carpool Karaoke, popularized by host James Corden in the United States, and who in the offices of ViacomCBS they would have it available.

Although the artist had several proposals on the table in recent weeks, the possibility of being in front of a program broadcast by Telefe It is the one that most seduced him, in addition to being the media that comfortably leads the rating since 2019.

In short, the cycle would be a fun meeting between the driver and a celebrity by broadcast inside a car, managed by either one. There, both express themselves without filter and with laughter in between on the personal or work issues while touring the city and referring to personal anecdotes, colleagues, moments of life and current affairs in general.