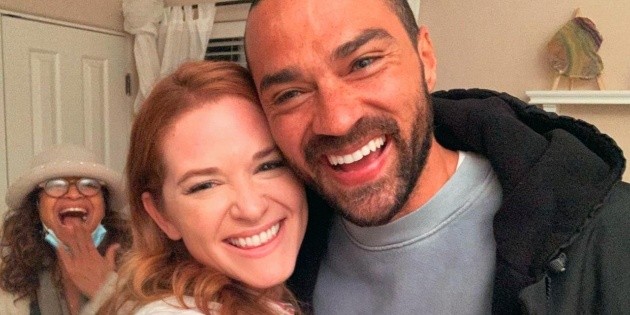 Grey’s Anatomy he got rid of one of his most beloved actors after the departure of Jesse williams in his role of Jackson Avery in season 17. The doctor moved to Boston where he had an emotional meeting with April Kepner, interpreted by Sarah Drew. In an interview, the actor spoke of his farewell and talked about Japril’s future in the medical series. Can you come back next year?

Williams spent 11 years on the ABC drama and appeared in a total of 270 episodes.. His role was increasingly important and among the most remembered by fans is his fictional romance with Drew. That is why the couple’s reunion in the current season was celebrated by the fandom. However, It also led to disappointment because it meant the actor’s departure from the program.


“It just happened naturally by actually honoring the truth of the character, not what I want or what the show wants, or what the fans want. What is true of the character? Where would he find himself?”, explained the 40-year-old interpreter to Deadline about the decision to end his participation in Grey’s Anatomy.

In the note, the actor acknowledged that he had interference in Jackson leaving to work in a foundation because in his private life he maintains a strong commitment to society. In addition, he assured that Dr. Avery “You will have many stumbles on your way to success”but he won’t give up until he gets it. In turn, he answered what all the fans were waiting for: Will he go back to April?

“Yes, I think it is quite possible that he will rekindle a romantic connection with his ex-wife, they are very good together, but the most important thing is that what he needs from that is friendship and kindness, patience and understanding. I think he will achieve it with her. and you can share it, give it and reciprocate it too “He replied to the joy of the public.

As if that wasn’t enough, he also expressed himself about the chance to return to the series for a special appearance. “Yeah, I think it’s totally possible. I think it’s totally possible. You never know how things will turn out. There are a lot of other factors at play, including schedules and other things, but I love the idea of ​​keeping that option open.”, affirmed without hesitation and maintained the possibility of seeing again Japril on the screen.