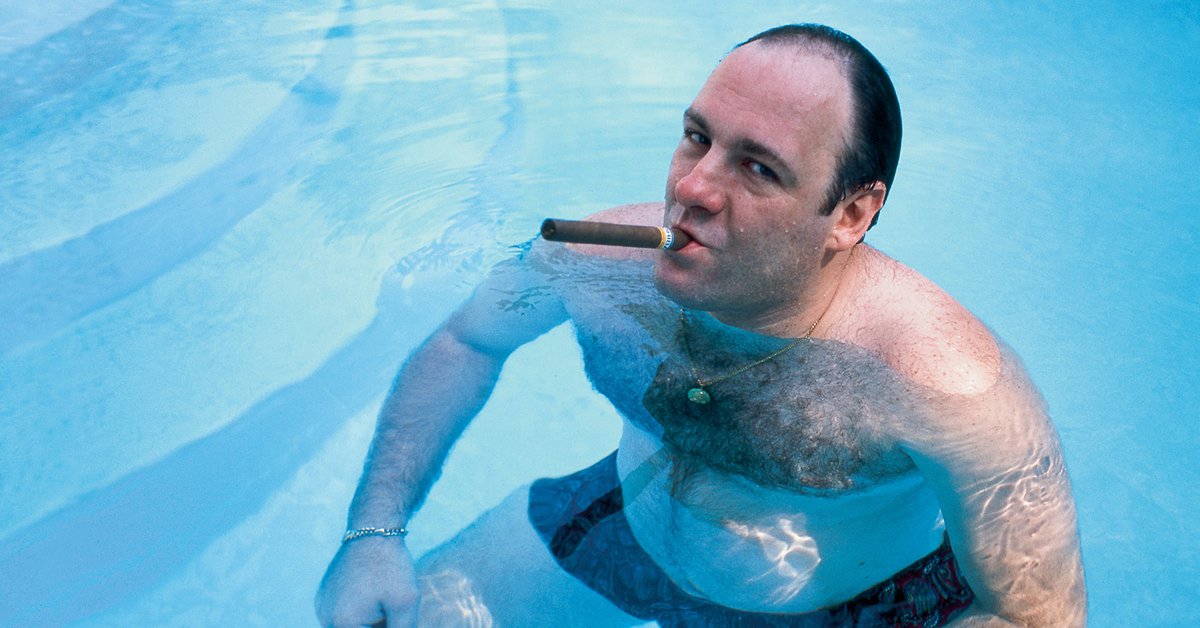 It could be the great opportunity of a lifetime. At least it was one he hadn’t had yet. To star in a series. He was 37 years old and had not yet achieved a leading role. He was an acting worker, used to jumping from supporting role to supporting role. It seemed late for his career to take another turn. The stars were young, athletic, good-looking. Any illusion I could have built collapsed in the middle of the casting. The reading had stumbled; what he had prepared did not come out. You heard the speech of that mafia boss say and you felt like a fake. When it was his turn to say one of his lines, he fell into a long silence. Looking down, he shook his head and angrily (with himself) left the study, muttering an apology. What James Gandolfini I did not know was that David Chase had chosen it the moment he saw him walk in. He knew that this half-skinned, overweight man with the oblique gaze must be Tony Soprano.

Today James Gandolfini would turn 60. Speculating what his career would be like today is an uchrony. A clue – solid, almost untestable – is found in Enough Said the endearing romantic comedy with Julia Louise-Dreyfus which was released posthumously. In any case, it does not make sense to investigate what did not happen, what his early death in Rome frustrated. It is enough with what he did. Those six seasons of The Sopranos made James Gandolfini one of the great television actors in history. There is an unanimous unanimity on the matter. The American critic Alan Sepinwall said that if a Mount Rushmore had to be carved with the heroes of television dramas, one of those sphinxes carved in stone would undoubtedly belong to James Gandolfini. The rest, he wrote, can be discussed. Jon Hamm, Bryan Cranston and several others can fight a place. But Gandolfini and his Tony Soprano have a guaranteed place in that Olympus.

Tony Sirico, Steven Van Zandt, a member of the E Street Band, and James Gandolfini as members of the Sopranos mob family

Before him (or them: Tony and James) for an actor to be in a series was a kind of descent in his career, something that could bring fame and money but never prestige. Among the revolutions that The Sopranos caused, this is one of the most notable. Gandolfini forever changed the dignity of the television actor.

James Joseph Gandolfini Jr. was born on September 18, 1961 in New Jersey. His father was Italian and his mother the daughter of Italians. James Sr. was a veteran of World War II and worked as a bricklayer. The mother cooked in a school cafeteria. James after finishing high school, studied communication at Rutgers. Later he had various jobs. The main one was that of patovica in nightclubs but he was also a truck driver and even had a bar. At the age of 25, he wanted to resume an old habit of adolescence, acting. His family didn’t think it was a great idea at first, but at the time they settled for him showing interest in something. No one, perhaps not himself, believed that he could succeed in the trade.

After a period of study, he began to present at castings. He landed a few minor roles on Broadway. Classical works: A Streetcar Named Desire and an adaptation of Rathole. Also roles in movies. Generally following the role physics he played a gangster, a thug, or a petty criminal. In several of those films he stood out despite his minor presence: True Romance, Crimson Tide o Get Shorty.

Then the explosion would come. David Chase presented the project of The Sopranos to the directors of HBO making a short plot review: “This is a guy in his forties, at the crossroads of his life, in a mid-life crisis. He has problems in his marriage, problems in his work, he is raising teenage children in modern society – the typical pressures of any man of his generation. The only difference is the boss of the northern New Jersey mob. Oh, and also, he goes to a psychologist “.

After the failed first casting, At Chase’s insistence, Gandolfini came back and did very well. However, he believed that the role would not be his. He had never been the protagonist of a great project. He was content to fill some of the supporting roles in the gangster gang. He assumed, in his words, that the chosen one would be “a kind of George Clooney but Italian.”

After a few emissions, The Sopranos had become a phenomenon. A new language for television. A world of its own, great scripts, a compact cast; but nothing could have been possible without a great Tony Soprano. The entire scaffolding was supported on it. I create a complex, three-dimensional mobster with chiaroscuro, with loopholes.

Mathew Weiner in an oral history of the series made by Vanity Fair magazine more than five years ago stated: “The casting of Gandolfini was key. His natural charisma. We love Tony because he has all of our animal appetites. Everyone loves to walk into a place and eat the biggest sandwich possible, sit in the best place, have sex with the most beautiful girls. But in his house he has the same life that we have. He can’t get too much respect in his family. “.a

The actors of the series, mostly unknown until now, became superstars. Much more Gandolfini than was the protagonist. To become aware of what the level of attention they generated meant, it is useful the case of Steve Van Zandt, who is a key member of the E Street Band, Bruce Springsteen’s band. As a musician, he had two moments of great media exposure; in 1975 with the appearance of Born to Run and in the eighties with Born in the USA, beyond his solo career that was languishing at the time of the beginning of The Sopranos. When the series was installed, Steve says, it was very difficult for him to go out on the street since he was recognized and even harassed wherever he went as never before. “The power of television” concludes.

Gandolfini came to the end of The Sopranos somewhat tired of Tony and what he generated. Yet he enjoyed his new superstar status and permanent recognition. He won every possible award: Emmys, Golden Globes, and Screen Actors Guild Awards. In addition, of course, the million dollars per chapter that he received in recent seasons.

In the same Vanity Fair note, Gandolfini said: “In the end I was mad at a lot of things. He was actually tired. What could I be tired of? David Chase made me live something unmatched as a life experience, acting and naturally economical. But over the years, the success and the money we all got more difficult and weird. “

With Julia Louis-Dreyfus, he starred in Enough Said, an endearing romantic comedy that premiered posthumously

At times, Gandolfini, despite millionaire offers and flattery, was attacked by the impostor syndrome. AND I doubted his talent and he only attributed his present to a conjunction of injustice (towards others more gifted) and a lot of good luck. Brad Pitt said he once told him that people said they were too lucky. He said it complaining and almost agreeing with his critics. Brad Pitt replied that it was not true, that he should not be confused, that he had earned what he had. Gandolfini after thinking for a while concluded: “It’s true. I fell apart working and waiting for my chance. I don’t know anyone who does something good and is lazy ”.

When Steve Carrell left The Office, the producers went looking for Gandolfini to replace him – a huge coup. It had been a few years since he had finished playing the mob boss. The economic offer was very tempting. When HBO found out, he made an unprecedented and somewhat unusual proposal. He paid him $ 3 million not to accept the role. In this way the chain tried to protect the legacy of its flagship series. The easiest money you ever won.

With her son Michael when he was 10 years old

In his last years he produced films, series and documentaries. Meanwhile he was looking for another great project that would excite him, that was at the level of The Sopranos. I wanted to conquer the cinema with a character of equal weight to Tony.

His love life was not calm but not as turbulent as that of other Hollywood stars. In his youth he suffered great pain. Lynn Jacobson, a former girlfriend, died in a car accident. That, he said, changed his life forever: “It’s not that I decided to do everything I had pending, nor was the motto ‘Life should not be wasted’ burned into me. But I could never get out of my head that everything can be over in a second. “

Later he married Marcy Wudarski. The marriage lasted only three years and they had a son, Michael. In 2008, he already became an unthinkable sexiest man on the planet (one of those categories of North American magazines) married model and actress Deborah Lin with which they had Liliana Ruth in 2012.

These days Michael Gandolfini is in the news. In a short time HBO will premiere The Many Saints of Newark, a prequel to The Sopranos. Michael with his 21 years will take the place of his father. He plays young Tony Soprano. It is not the first role of Gandolfini son who has already participated in several series and films.

On June 19, 2013, James Gandolfini was at the Boscolo Exedra in Rome. An old and lavish palace converted into a luxury hotel. He was walking with his family through Italy on the way to Taormina. At the film festival in that city he would receive an award for his career. He had dinner with his 13-year-old son Michael. James had several drinks: beers, piña coladas, rum, and ate abundantly. At 10 pm Michael found him lying in the living room of the large room. The boy asked for help. The emergency service arrived immediately and while they were carrying out resuscitation maneuvers they transferred him to the nearest hospital. But there was nothing more to do. A massive heart attack ended his life. Was very young. He was 51 years old.

The news of his death, eight years ago, shook. He was a beloved character, someone admired And unlike most dying celebrities, she still had a lot to give, there was still a lot of talent to enjoy.

With James Gandolfini it can be said that the code that he fervently executed from his character of Tony Soprano applies when he reminded each member of the family, once you got in, you didn’t get out anymore. The admiration for James Gandolfini also has no possible way out, once it is acquired it is not abandoned.

Oliver Stone turns 75: the day he killed a man, his role in receiving an award and his fascination with dictators
Freddie Mercury would turn 75: the true love of his life, the betrayal of the lover and the sad and hidden end