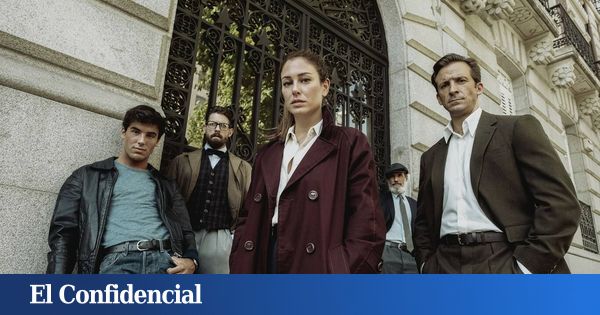 Go back to Netflix one of his most popular series, ‘Sex Education’. The new episodes promise to turn Moordale Institute upside down with the addition of Hope (Jemima Kirke), the new director of the center who will prohibit sexual relations between students.

It is not the only powerful premiere in the streaming giant, since we can also enjoy the new series by Blanca Suárez, ‘Jaguar’, a thriller set after World War II. The well-known actress plays Isabel, a survivor of the Nazi Holocaust who tries to capture Hitler’s allies hiding in our country.

A Apple TV+ comes another of the most anticipated releases of the month, the second season of ‘The Morning Show’, again with Jennifer Aniston and Reese Witherspoon.

We review the most notable releases of on-demand content platforms such as Netflix, HBO Spain, Amazon Prime Video, Disney + STAR or Fimin, as well as RTVE’s La 1.

The Moordale school students are back. In the new episodes we will see Otis (Asa Butterfield) enjoying a much more active sexual life, Eric (Ncuti Gatwa) and Adam (Connor Swindells) freely living their relationship and Jean (Gillian Anderson) facing her pregnancy.

Actress Jemima Kirke (‘Girls’) joins the series to play Hope, the school’s new principal. Dua Saleh, a non-binary gender singer, is another of the signings of the season. Laurie Nunn continues to command fiction in its third installment.

This South Korean thriller comes to Netflix that promises to give us goosebumps. The plot could not be more macabre: a group of people with financial problems agree to participate in a mysterious championship inspired by children’s games to win a large sum of money, in exchange for risking losing their lives.

As if it were ‘The Hunger Games’, in each phase one of them will die. Who will survive to take home the long-awaited prize? Stars Gong Yoo, Lee Jung Jae, and Park Hae Soo (‘The Badminton Boys’) lead the cast.

Blanca Suárez has a new series on Netflix after the end of ‘Las chicas del cable’. In ‘Jaguar’, she takes on the role of Isabel Garrido, a survivor of the Mauthausen-Gusen concentration camp who tries to expose the Nazis who hid in Spain in the 1960s to justice.

It is an original creation by Ramón Campos and Gema R. Neira (Bambú Producciones), creators of great hits such as ‘Gran Hotel’ or ‘Alta Mar’. The cast is completed by Iván Marcos, Francesc Garrido, Adrián Lastra and Óscar Casas.

‘Queridos Blancos’ (‘Dear White People’) changes record in its final season to become a musical. The reason is that the students of the Winchester campus will have to prepare an end-of-year musical show inspired by the classics of the 90s.

Despite his recent failure at Telecinco, the series starring Belén Rueda is a success on Amazon Prime Video, which has already renewed fiction for a fourth season. But before that, on September 23 the followers of the medical drama will be able to enjoy the third batch. Produced by Mediaset España together with Alea Media, the fiction takes us into the day-to-day life of the Pediatric and Maternity area of ​​Hospital Los Arcos.

Barry Allen / The Flash (Grant Gustin) returns with his most difficult season. His wife Iris West (Candice Patton) is trapped in another dimension and The Flash will have to do everything possible to rescue her. All while facing Chillblaine, a new villain brought to life by Jon Cor (Shadowhunters).

The plot follows a writer named Harry Gardner (Wittrock), who moves with his wife Doris (Rabe) and their daughter, to a small coastal town called Providence. They will soon discover that dangerous marine beings inhabit the area.

The long-awaited series ‘Y: The Last Man’ finally arrives on our screens. Based on the famous comics by Brian K. Vaughan and Pia Guerra, it shows us a post-apocalyptic story in which all the male mammals on the planet are exterminated by a strange disease that does not affect female mammals.

However, a man named Yorick (Ben Schnetzer) and his pet monkey manage to survive without apparent explanation. Diane Lane, Olivia Thirlby, and Ashley Romans round out the cast of this original Hulu fiction.

The series starring Jennifer Aniston, Reese Witherspoon and Steve Carrell returns to Apple TV + with ten new episodes. The trailer shows us Alex (Aniston) away from ‘The Morning Show’, the morning show that he presented with Bradley (Witherspoon) in the first season.

The new installments feature the additions of Hasan Minhaj as Eric, Alex’s replacement heading the show; and Julianna Margulies (The Good Wife) as Laura Peterson, a new journalist for the UBA television channel.

Maribel Verdú stars in the television adaptation of ‘Ana’, the first novel for adults by the writer and playwright Roberto Santiago, creator of the children’s franchise ‘Los Futbolísimos’. The series follows the criminal lawyer Ana Tramel (Verdú), who must defend her brother Alejandro (Unax Ugalde) after being accused of murdering the director of a major casino in the capital. The protagonist will have to face the heavyweights of the gaming industry to defend the innocence of her brother, who could have been the victim of a montage.

Filmin premieres this gripping German thriller from the producers of the ‘Deutshland’ trilogy, based on the book ‘The Illusion of Memory’ by Julia Shaw. The focus of the story is Dr. Julia Braun (Alexandra Maria Lara), a forensic psychologist and judicial expert who investigates the strange kidnapping of a girl at the Natural History Museum in Berlin, which no one claims.

Composed of eight episodes of 25 minutes each, in each installment Julia will have to question a witness to the event to unravel the mystery.