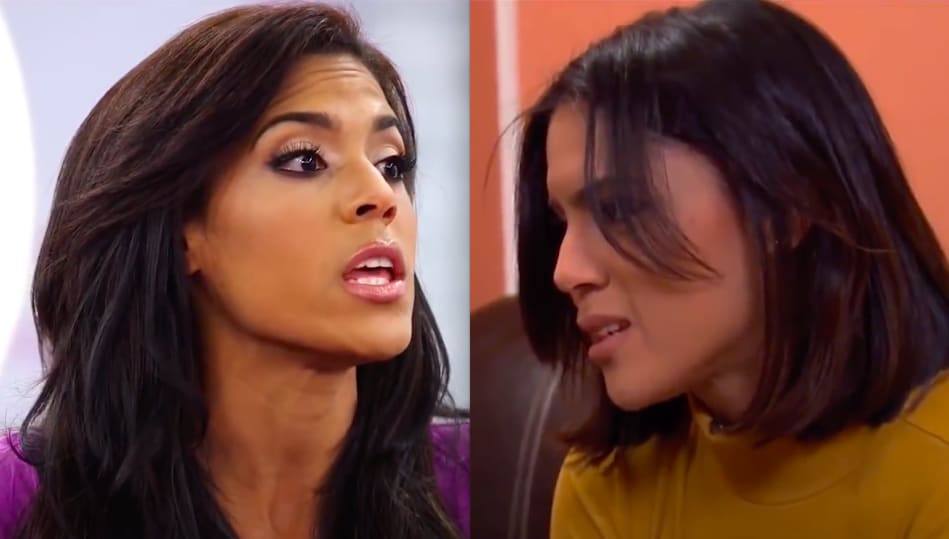 Francisca Lachapel is leaving Despierta América? Given the unexpected announcement that the host Maity Interiano will leave the broadcast morning, but not from Univisión, because another space will be assigned to it, now the alarms are turned on for the former beauty queen who has just become a mother to baby Gennaro.

And it is that Francisca Lachapel through her account Instagram She made an unexpected announcement that fuels rumors that she will soon stop being the host of Despierta América. Could she be leaving to fulfill her dream of being a mother or did she get tired of the morning and will she start a new facet?

Francisca Lachapel will go in search of another dream. Goodbye to Despierta América?

It turns out that the host of Despierta América could leave the program to pursue her dream of an actress, something she had manifested since 2015 when she won the Nuestra Belleza Latina contest because her intention was to stay in the artistic medium but as the protagonist of melodramas.

Then, in 2016, he got a role on Televisa, with the production ‘Despertar Contigo’, and according to reports from People in spanishAt that time, Francisca Lachapel declared that the acting profession was more complicated than people think, since the working hours are long, although the viewer perceives it as something simple on the air.

It is going to make her dream of an actress; Out of Wake Up America?

In social networks, Francisca Lachapel surprised her fans with an unexpected image raising suspicions of her departure from Despierta América, because we will soon be able to see her in a Hispanic production, a series called ‘Líos de Familia’, which would then mean that will she stop be a driver?

“Universe, do you hear me? Do you hear me? Do you feel Me? I am very happy to tell you that I reconnect with one of my greatest passions, acting. Soon you will be able to see this series @liosdefamilia that I recorded in my country with great talents from my land. Thank you @zumayacordero and @caribbeancinemasrd for the opportunity. I had a lot of fun. Let’s go for more! ”, She wrote in the photo where she appears very pretty in a brown and blue dress with the clapperboard of the series in her hands.

No longer want to be a host of Despierta América?

The series for which Francisca Lachapel will have a special participation is part of the platform in Spanish called ‘Pantaya’ and is a production from the Dominican Republic where the host of Despierta América is originally from and deals with the story of several people who live in a building from Santo Domingo with various problems.

And it is that after becoming a mother, Francisca Lachapel has entered a new stage of life and by fulfilling that desire to marry and be a mother, she also seeks to give herself space in the professional aspect, not only as a driver, but now as an actress, something you always wanted and it seems will be fulfilled again.

In addition to congratulations, Francisca Lachapel received criticism for wanting to act and several people were angry with her for wanting to be an actress: “My God and anyone can act and sing these days. Francisca is already an actress ”,“ No wonder those films don’t hit her ”,“ That’s why those projects don’t hit her ”,“ Please quit, you don’t like you on TV anymore ”.

And it is that since she ‘disappeared’ from Despierta América to live her last weeks of pregnancy, people began to ask for the head of Francisca Lachapel because they considered that ‘it was no longer necessary’ in the program: “Is this woman seriously acting? She acts but her best role as a clown ”,“ In this photo she looks like Apocalyptus if that would be her role, she would no longer wear a disguise ”,“ Disgusting! ”,“ Poor panchueca no longer finds what to invent, that lady PANCHA ”.

Are you preparing for your role as an actress and does your body make you notice?

After days of absence from Despierta América, Francisca Lachapel finally appeared on the show again and now her body showed the remarkable change that everyone was waiting for: she lost the kilos gained since pregnancy and now her figure looks even better than before having a baby. her baby Gennaro.

The criticisms for Francisca Lachapel were very harsh when she announced that she would become a mother and then the entire pregnancy process faced the worst, because people were not used to seeing her swollen and with the changes typical of a woman about to be a mother, for what he decided to ‘get away’ a bit from social networks so as not to read insults against him.

Francisca Lachapel and her new body, how many kilos did she lose?

A few weeks ago, on her Instagram account, one of the photos that received the most criticism was the one at the top, where she can be seen in an evening dress for a program of ‘Nuestra Belleza Latina’ and remarkably wide and with kilos still of the pregnancy, people did not tire of pointing it out.

Faced with the attacks, Francisca decided to ‘put an end’ to that figure and start in the purest Adamari López style, a rigorous training of several days in order to lose the fat accumulated by pregnancy and get the body of a beauty queen that she had before being a mom.

The outfits that the host of Despierta América is given in the program, have benefited her silhouette to look more fit and according to her weight, however, the beauty of Francisca Lachapel and the body that she has is undeniable to note that your workouts are helping you by leaps and bounds.

With an elegant white long-sleeved blouse and her waisted skirt showing the leg, Francisca Lachapel conquered in one of the broadcasts of Despierta América and the comments for her appeared in praise of the great image she has shown since she became a mother.

Thinner and people applaud it

In her most recent Instagram video, Francisca Lachapel is seen with her coach very energetic and ready to train hard doing cardio and thus reach her peak of beauty and regain the body that she had so hard to maintain when she began the process of her baby Gennaro.

With her long hair, her leggings and top, the Dominican woman shows off her face more beautiful than ever, but what undoubtedly stole people’s glances is her body that is undoubtedly better than ever, a product of exercise and energy. diet, is it that you want to compete with Adamari López and be just as thin?

Does it look better than Adamari? Francisca Lachapel shows off her ‘new body’

If Adamari López managed to lose the extra kilos in the space of a year and a half, Francisca Lachapel did it in just 6 months, so the commitment she had is undeniable and the top photo with a light blue dress shows the slim body she now possesses. and has all his fans delighted who commented on the Instagram photo:

“Every day more beautiful and slim”, “Francisca is beautiful”, “Very beautiful woman after she had her child you changed a lot and that very beautiful dress and very good color girl”, “Always beautiful, more now that she has a beautiful FAMILY “,” It was good to see you back Fran “,” Here with an extra three meters of fabric for the dress “, some people commented.

The body of the driver has suffered harsh criticism

This year, Francisca Lachapel has been the happiest to become a mother, but it was not an easy process due to the criticism she received for her physical appearance during and now after pregnancy and although she claims to be comfortable and proud of her body, in Wake up America, are you being put to lose weight urgently in the middle of the program?

The sexiest and most beautiful Dominican on Hispanic television returned to Despierta América a few weeks ago after giving birth to her baby Gennaro, the charismatic and tender son of Francisca Lachapel who has stolen everyone’s heart, but the host has not yet recovered the pre-pregnancy figure. Some images in this note come from It is Y It is videos.

IS AMERICA SAYING GOODBYE TO WAKE UP? Francisca makes an unexpected announcement that has everyone commenting: “You no longer like you on TV.” (PHOTO)