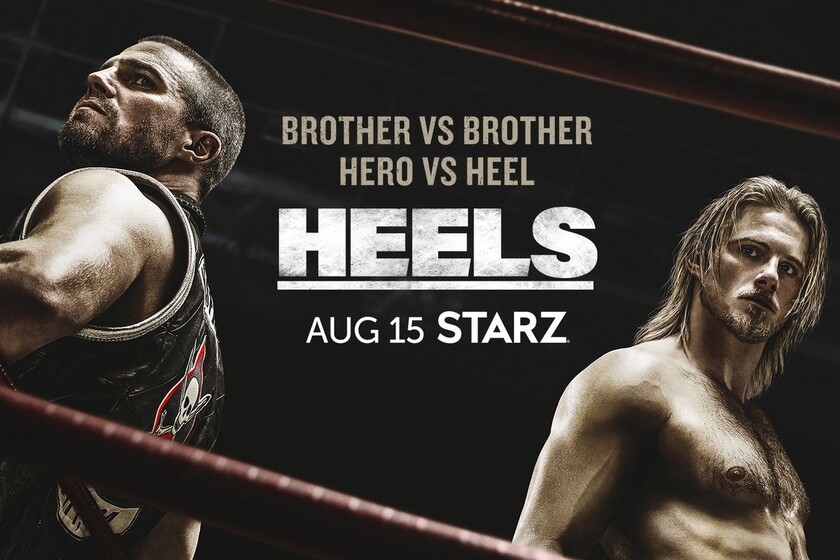 Stephen Amell has repeatedly shown his love for wrestling, getting to debut as a wrestler in WWE in a tag team match held at the 2015 Summerslam edition. Since then he has made appearances in other wrestling companies and had no hesitation in accepting ‘Heels’ as the first series in which he participates after spending almost a decade in charge of ‘Arrow’.

Created by Michael Waldron, who this year has also been in charge of ‘Loki’, ‘Heels’ is not a series that focuses on the most successful side of the sport. Instead, everything points more to a more mature and slightly disenchanted variant of what he proposed at the time. ‘Friday Night Lights’ with American football in a title that arrives this Sunday August 15 to Starzplay. In addition, it does so by offering a great simmering approach to the wrestling world that you can easily connect both with those great followers of the same as those whose maximum contact with it may have been ‘GLOW’, or even not that.

‘Heels’ is the story of two brothers. The eldest (Amell) was the one who was left in charge of his father’s small wrestling company and little less lives for the business, while the youngest (Alexander Ludwig) is much more concerned with his personal brilliance and holds a certain resentment towards the former for not making things exactly easy for him. That rivalry happens both inside and outside the ring, functioning as the main dramatic axis of the first season of ‘Heels’.

But nevertheless, ‘Heels’ is much more than thatBecause it also works as a love song to the world of wrestling, delving into all the ins and outs of the business through the Duffy Wrestling League, an independent company with a very small market and whose future hangs by a thread at all times. This means that at the same time the passion of the fighters can be reflected and the fact that achieving glory is most unlikely. Even the mere fact of being able to earn a living fighting is.

There is also no lack of space for frustrated fighters because their time in the DWL never ends or how a brilliant mind is wasted for the business basically because of the fact of being a woman. It is true that he feels to show the kindest face of Jack Spade, the character played by Amell, but at all times a certain bitterness hovers that in most cases arises from decisions made by him that adds even more dramatic richness to the series.


Nevertheless, negative charge tends to fall more on Ace Spade (Ludwig), someone hell-bent on getting his way and shining as a face – that’s what heroes are called in wrestling, while villains are known as heels. And of course, when things go wrong, he begins to show who he really is in difficult situations. In his case, the dramatic evolution may err on the side of being more obvious and traditional, but it is very well managed and Ludwig knows how to play with that more despicable side without simply becoming a walking shit.

Around all this we find a portrait of the world of wrestling much more typical of another era than of today. Even outside the ring, they try to maintain the illusion of rivalry between the fighters, but it is that in general terms a more traditional approach is sought that the business left behind long ago. It is clear that this helps the fact of settling in a small southern town in the United States, where it even gives the feeling of having been anchored in a way of life alien to the ups and downs of today’s society.

Much to celebrate at ‘Heels’


It is not that ‘Heels’ so much delves into that as an essential scenario for the narrative style that Waldron is betting on from the scripts to fit like a glove. In fact, it is a perfect basis for understanding the difficulties that the DWL has to get attention beyond its local market, something that the series also reminds us through that wild card which is the eccentric and fascinating character played by Chris Bauer.

In addition, this also allows the story to be enriched in other ways, be it through narrative ways of longer duration such as the doubts of the protagonist’s wife about the economic future of his family or of shorter scope such as the wonderful appearance of CM Punk in one of the episodes. It all adds up to the ensemble instead of going their way without worrying about more than personal show-off or the brilliance of a specific episode.


It is true that this leads to the series have a much slower pace than some might expect and that the action inside the ring is quite contained, both by minutes of presence on the screen and by the movements that the fighters execute -primary credibility although there are some that look a lot-, but this is still a logical consequence of the wishes of the character played with great conviction by Amell. And it is that he is not the only one who worries about the future of the DWL, but he is the one who has a greater weight in decision-making.

All of this leads to ‘Heels’ being a drama very focused on adult audiences. Here the great owners have long been left behind to make way for a struggle for survival. There is still the ambition to be able to go to more at all levels, both of the company as a whole and on the part of the fighters, but disenchantment (not failure) is always around the corner, waiting to bring you back to the not so bright reality.

For the rest, the rest of the cast is very well chosen, but, beyond the notable work of the main duo, I would like to highlight mainly the work of Kelli Berglund as Crystal, a young woman with aspirations to become a fighter and whose knowledge of the business rivals that of the character played by Amell, but is systematically ignored when push comes to shove. His story line may point to predictable, but it’s one of those times that you want to be told that story of personal growth, both for being a well-written character and for the work of the actress.


‘Heels’ is beating you little by little, serving in my case to remember that love for wrestling that I always had since I was little and that was currently at historical lows. Of course, the series does not trust the nostalgia card, offering instead a dramatic story -even tragic at times- over a very successful slow fire that knows how to use a multitude of elements of this sport to offer one of the best premiere series so far in 2021.