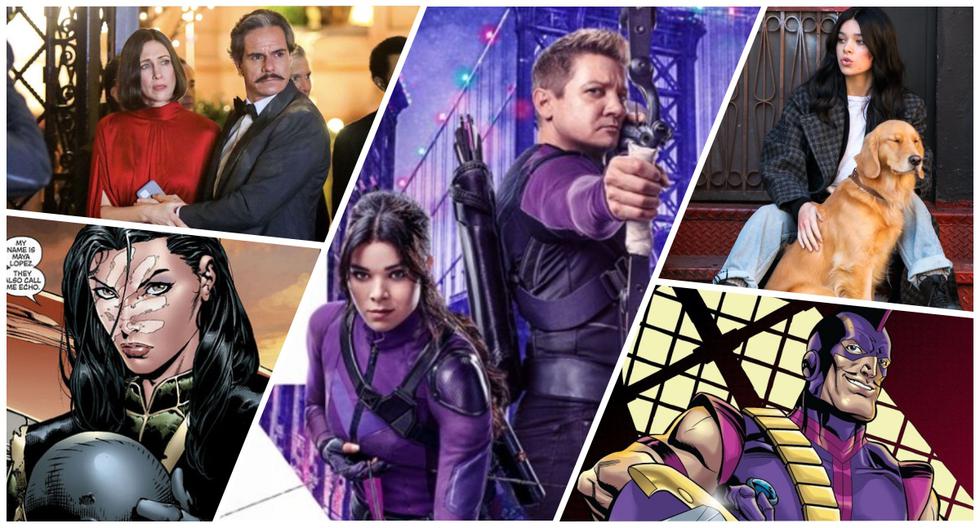 Disney+ premiered on its platform “Hawkeye”, The fourth series of the Phase 4 of the Marvel Universe. Preceded by “WandaVision”, “Falcon and the Winter Soldier“, and “Loki”, This new production starring Jeremy Renner and Hailee Steinfeld addresses the story of Clint Barton, the real name behind Hawkeye, along with 22-year-old Kate Bishop, skilled with a bow and arrow like him, and a fan of his since she was a child.

Set two years after the apocalyptic combat against Thanos in “Avengers: Endgame” (2019), in “HawkeyeBarton has a seemingly simple mission: to reunite with his family at Christmas. However, everything indicates that he will not be able to do it because he will meet Kate Bishop has turned his life upside down.

Bishop, who dreams of becoming a superhero like Barton has been in serious trouble with the authorities and a mysterious mob ever since he stole the old suit. Ronin of the mature Avenger. This will force him to help you despite the fact that doing so could endanger his family and, therefore, the tranquility he has been looking for after what he has lived with. Avengers.

SEE ALSO: “Hawkeye,” the Second Avenger, Finally Gets His Series: Is It Worth Watching? | REVIEW

“The configuration of this situation is very important: our characters are something like opposites,” Renner told the press about the chemistry of the two protagonists. “But you also need an intelligent and capable actress who can do it. It takes like a dance between the two to get it done. I feel really good about that aspect of the show, “he concluded.

For his part, Steinfeld said about Kate Bishop: “I found it very exciting that this is a very special character and much loved by many (comic book) fans, who have waited a long time to see him come to life (on screen).”

1. The time the story unfolds

“Hawkeye” is set in December 2024 within the UCM chronology, two years after the Avengers and Thanos fight in Endgame. This has been confirmed by the director of the series Rhys Thomas himself to a GamesRadar +.

Let’s go by parts. The story of “Endgame” stretches from 2018 to 2023, so two years later it would take us to 2025. However, Thomas has already said, “Hawkeye”Is established during Christmas 2024. It is worth noting that the rest of the post Avengers series have also taken place in 2024. To understand it better, let’s see the following table:

“Hawkeye”, Is inspired by the comic series written by Matt Fraction and David Aja between 2012 and 2015, considered one of the best in his field and winner of the prize Eisner in various editions.

“… We are not facing a comic that reinvented or established a before or after, but it is poured techniques previously applied by other authors, by way of experimentation, proposing something different at the time and that, in addition, has aged very well. That, in addition, is superbly written, balancing humor and drama without the interest declining chapter by chapter and, on top of that, knowing how to juggle with tone and focus of situations, makes it a recommended reading ”, is read in the November issue in which Akira Comics reviews the work of Matt Fraction and David Aja.

“Hawkeye” It begins in 2012, in the middle of the battle between the Avengers and Loki with his Chitauri army. Being a 10-year-old girl, Kate Bishop will lose her father in this war and will be rescued by one of the ‘Hawkeye’ arrows. From then on, the little girl will admire and want to emulate her hero.

In the comics. Kate’s story varies. The history of the 22-year-old archer dates back to 2005, when she first appeared in the first issue of the comic series “Young Avengers”. Unlike the Disney + series, Kate loses not her father but her mother and has to deal with an absent father figure whom she idolizes.

However, this adoration will end when he discovers that Mr. Bishop has a bad relationship with the supervillain. The matador, known enemy of Daredevil. Trapped by the bad guys, Kate will finally be rescued by the Avengers and it will be the Hawkeye who guides her life.

Watched the first two episodes of “Hawkeye”, we could say that there is a clear enemy of Kate and Clinton. Is about Jacques Duquesne (Tony Dalton), a mysterious millionaire who is also Bishop’s mother’s boyfriend. Educated, with a quite zen character, this character does not like his “stepdaughter” at all because she thinks that he is responsible for the death of her own uncle. An expert in fencing, this being still does not reveal his true self and is the subject of discussion among fans of the series because it is not known if he will be really bad or will end up being faithful to his version of the comic, in which using the alias Swordsman in time becomes an ally of the Avengers.

5. The history of the dog

A no less important new protagonist in “Hawkeye” is the one-eyed dog that Kate meets when she tries to escape from the Sports Mafia. Named Lucky, this furry being will steal the heart of the protagonist who, seeing him helpless and hungry, will give him shelter in his home.

Lucky’s story in the comic varies a lot from the series since the dog belongs to Ivan Banionis, one of the members of the aforementioned mafia. In the midst of the constant fights of this group, the animal loses an eye. Alone and abandoned, Lucky (Arrow) will receive a piece of pizza from Clint Barton and return the favor by helping him in a fight, thus sealing a bond of friendship and loyalty between them.

Towards the end of episode 2 a mysterious character appears, it is Echo. For those who do not know, this mysterious being whose first name is Maya López (Alaqua Cox) is the daughter of a gangster who, when killed by Fisk, Daredevil’s enemy, entrusts the life of his little girl to his own murderer. Among the powers of Echo, as Maya calls herself, is her mastery for music, for gymnastics, as well as having “photographic reflections.”

In the history of Disney +, this character just made his appearance and we do not know where Marvel will take his plot.

-The first Marvel Studios series that landed in the service of streaming it was WandaVision. All 9 episodes can be seen exclusively in Disney+, as well as the 6 episodes of Falcon and the Winter Soldier, and the 6 episodes of Loki.

SEE ALSO: Actress, singer and producer: a review of the career of Hailee Steinfeld, the protagonist of “Hawkeye” and “Dickinson”

Tony Dalton surprises as the swordsman in “Hawkeye”: a review of his career as a villain

“Hawkeye”: Jeremy Renner and a review of the criticisms that resonated in his career

“Hawkeye”: the series that could lead to a generational change in Marvel

“Hawkeye”: 6 facts so you don’t miss out on watching the new Marvel series