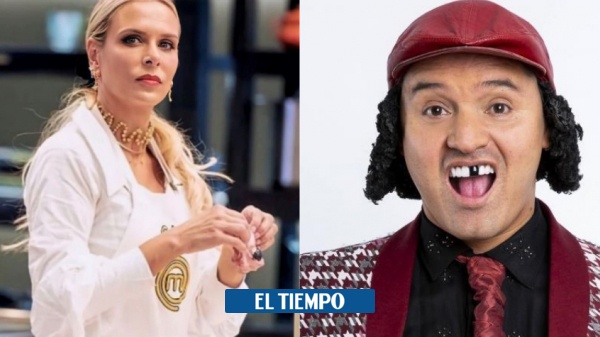 What happens every weekend in one of the realities most viewed in Colombia, MasterChef Celebrity, continues to be a recurring topic of discussion on social networks.

This Sunday, viewers witnessed a ‘field challenge’ held in the city of Cali. There the red teams faced each other (led by Catalina Maya) and Verde (led by Viña Machado), who had the captaincy for having previously won immunity.

During this challenge, the teams had to cook three types of fried foods: empanadas, marranitas and aborrajados, with their respective sauces and chili peppers.

However, both Internet users and some competitors showed great dissatisfaction, noting that Catalina Maya (model and businesswoman) had a ‘strategy’ so that the group of ‘the four babys’ was not in the elimination challenge.

Liss Pereira assured: “Catalina is a woman with impressive energy, she is a machine, she does a thousand things all the time and always works at 100 […] Today he works at 40”, Implying that, from her point of view, Catalina was not fully committed to the team she led.

Tensioning was the moment between Liss and Catalina in which they did not manage to prepare the 15 empanadas that were asked of them in the challenge.

Liss Pereira, another of the competitors, even commented that their pots had been turned off while others were about to burn, and that it was not known how so many were happening calamities on your computer.

“This is a game and we have to save ourselves; and, of course, if the other team won, we would save all 4”Maya confessed before the cameras.

This strategy outraged many on social media, who commented: “You have to be very rotten in the head not to understand the difference between a strategy and playing dirty”, Ensuring that the way Catalina and her friends played was not legitimate.

“Too bad that a family program supports the lack of morals and values ​​that have done so much harm to our country with actions like the ones it did tonight,” said a user on Twitter, referring to Catalina Maya.

(You may also be interested in: The wave of memes unleashed by the blind challenge of MasterChef Colombia).

Thus, a participant in one of the earlier versions of the famous reality He also joined the wave of comments about Maya’s actions in the game. “Not even the protagonists of the novel had such rat strategies,” he tweeted the comedian Hassam.

Several netizens agreed with him. @ gloriang1958 replied: “The saddest thing is that the channel has the images and did nothing. He should have punished her, or give the red team the victory, and so they were all punished”. Ensuring that something should have been done about the situation.

Another competitor, Julio Sánchez Cóccaro, who had re-entered the competition last week, was eliminated at the end of yesterday’s program. After his departure, he reflected: “Ethics it is not negotiated for any money, for any game, for any work ”.

He also assured that “eThis is little Colombia, in that order of ideas, the country has to change, because if it is going to work with strategies like ‘let’s lose, I don’t lose anything and you lose a lot’, I think the country is not going anywhere”.

Ethics are not negotiated for any money, for any game, for any work, I am left with that phrase of Mr. Julio. #MasterChefCelebrityCo

Other viewers, on the other hand, considered that this was a good strategy for the game and that criticizing it was ‘double standards’.

Catalina, is the representation of the day to day in Colombia, corruption, lack of ethics, unfair competition, sabotage of those who make an effort and give everything to not let them arrive. #MasterChefCelebrityCo

It is to remember that Catalina Maya had already been eliminated of the competition, however, was reinstated last weekend along with Julio Sánchez Cóccaro.

Said reinstatement had caused reactions among Internet users, since their participation has always been controversial by the group of ‘the four babys‘that Maya forms together with Viña Machado, Marbelle and Carla Giraldo.

Netizens criticize some of the comments the group makes to other competitors.

Users also remembered Catalina’s participation in the Caracol ‘relaityThe agency‘, who was looking for the best couple of models. She participated there as a mentor for one of the teams.

She even denounced on her networks bad treatment by users, who constantly criticized her attitude in the model reality show.

Will these attacks be repeated?

Seven gallants of Colombian television who have declared themselves gay

The reason Chris Carpentier had body paralysis for a month