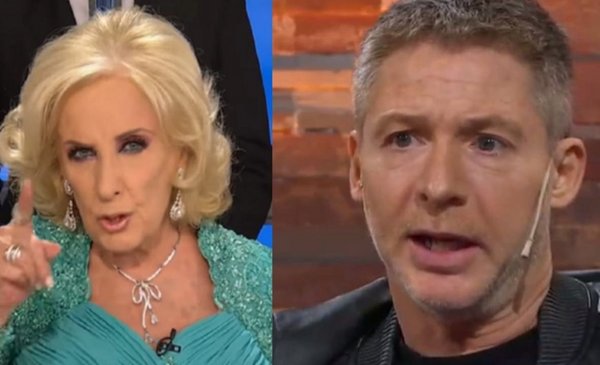 Adrian Suar revealed on a recent TV appearance that he had a heated argument with Mirtha Legrand some years ago, due to a mistake made in one of his fictions. The lunch diva contacted the producer and he made a lapidary comment in reference to an event about his life that he told in one of his creations, enraged.

“Mirtha got mad when we did it in ATAV, for some data that it is seen that I was wrong with the information of some truthful fact. Obviously I had the call the next day, from ‘this is not like that, this is not like that’. And when I wanted to answer, satác (alluding to the fact that Legrand had cut off the phone). You saw how grandmother is ”, Suar commented to Juana Viale at a table that had him as a guest.

On Argentina, land of love and revenge, SUar bet on a period fiction, starring China Suárez and Gonzalo Heredia, and decided to pay tribute to the diva, with a memory of her golden times. Despite his good intentions, the result was not what Mirtha expected and the producer had his challenge over the phone.

Actress Leonor Manso resigned from Adrián Suar’s new strip before its premiere and forced the producer to make a drastic change of plans. “With much pain, I left The 1-5 / 18, Polka’s novel, because it didn’t give me the body or mind to do theater and TV at the same time. I was there like five months, so I had a lot of recording. It’s a shame because it was a beautiful group and story, and there is a nice climate in that recording.”, Revealed the artist in a radio interview with Marcela Coronel.

“I felt something physical and mental. Doing theater is very difficult, television is very demanding. Now the novel has an impressive rhythm. Many scenes per day. I left with a lot of pain, because we have always done very nice things at Polka, like this one, and this was a group of beautiful companions, “the actress continued and closed with a comment about the moment she contacted To sweat to be honest: “I told Adrián Suar and he took it well. He is always very affectionate with me. And my colleagues too, they felt sorry like me. There is a nice climate in that recording, with a lot of young people, very nice”.