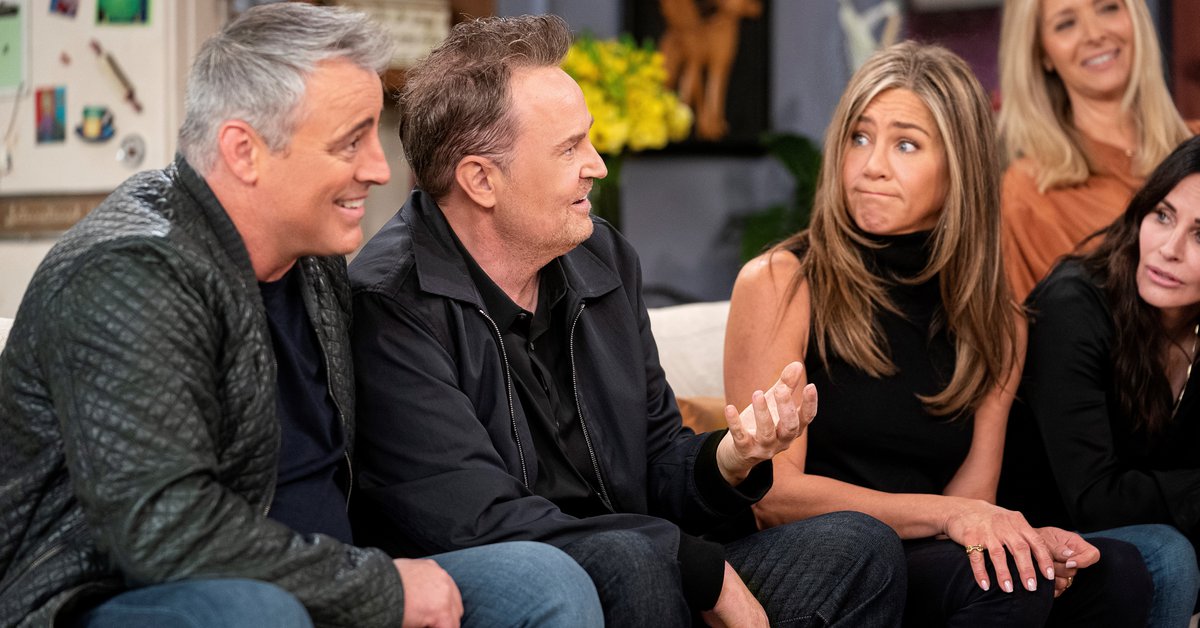 After 17 years, the original cast of Friends was reunited on the original set. Enthusiastic, one by one they arrived, they sat on the famous armchair and moved embraced by the reunion. Although for “Rachel” played by Jennifer Aniston or Lisa kudrow, better known as “Phoebe” the years do not seem to have an effect, other of the actors looked completely different.

The iconic “Joey Tribbiani” Matt LeBlanc) came to the old apartment in a striped shirt, hair completely gray and without the body that was known to him in the nineties. Also, “Chandler Bing” (Matthew Perry) arrived with his well-known sense of humor and already in the interview, he wore a black suit.

So much Joey as Chandler They sat back in their reclining seats and relived those times when they quietly talked in one of the most famous series in the United States.

For her part, Jennifer Aniston came with the same blonde color and “Monica Geller” (Courtney Cox) showed an incredible and long black hair. What’s more, “Ross” remained relaxed and very happy to be able to hang out with all his former teammates.

During the reunion, the actors were not only in the iconic sets of the program, they also read some of the scripts, they told about how the series little by little became a generational icon that reached magazines such as Vanity fair or Rolling Stone.

The creators also remembered how they chose each of the actors and also people from all over the world, including South Korean band BTS, highlighted the influence that Friends had in their lives.

It should be remembered that this special reunion was broadcast by HBO Max, but in the days before the premiere, Jennifer Aniston, Lisa Kudrow, Courteney Cox, David Schwimmer, Matt LeBlanc and Matthew Perry they spoke with the magazine People about the encounter and her memories of the comedy.

“10 years of irreplaceable memories flooded me”, He highlighted for the publication, the actress who gave life to Monica in the nineties and remained in the memory of her followers as the most controlling of the group, but also as the person in charge of their union.

Friends: The Reunion, It is the special of the successful NBC program that will be broadcast on May 27 and although it does not have a special script, In the conversation that the actors had with the North American publication, they highlighted what could have happened with their emblematic characters.

“I always feel like Monica would be doing something competitive with other mothers and trying to get over them. Like at the school bake sale or something. I mean, she would be very annoying. I would be at the head of the PTA (parent teacher association) or something like that, ”Cox told People.

“Joey would have opened a chain of sandwich shops,” LeBlanc said. “And he would have eaten all the sandwiches,” Perry joked.

Following the idea of ​​entrepreneurship, “Ross”, according to David Schwimmer, would play with bones by being a paleontologist and He would also invest in “Joey’s sandwich shop and lost a lot of his savings for his children.”

Friends, the story of a group of twentysomething friends from New York, it was one of the most successful television shows of the 1990s and it found new life in streaming platforms, where it is one of the most viewed in the world.

The “Friends” special already has a premiere date and an emotional preview
Courteney Cox confessed that it was not fun to record the opening sequence of “Friends” in the source
17 years after the last episode of Friends: the day Jennifer Aniston and her friends really cried