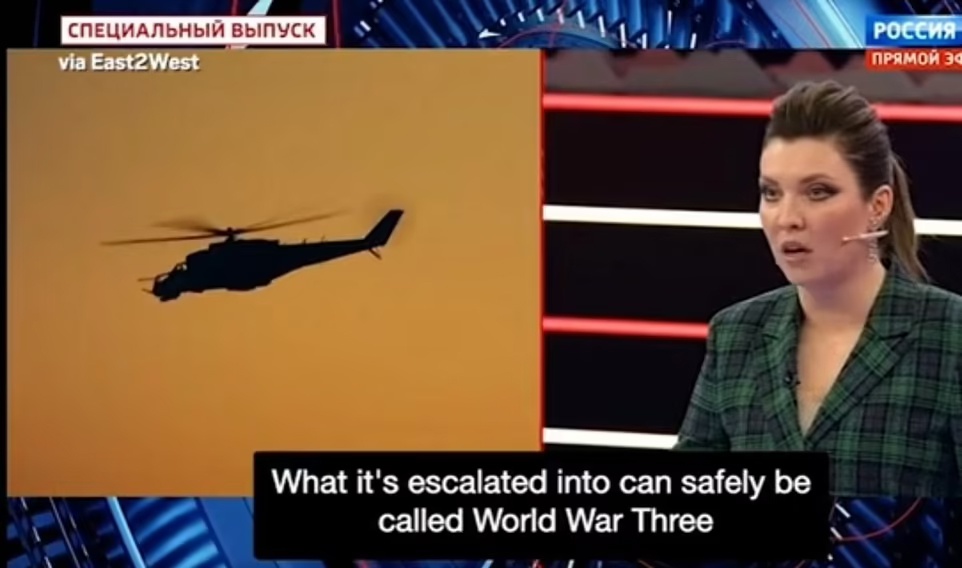 For Russia, the Third World War has already begun. The concept that figures associated with the Kremlin tend to resort to in the midst of the conflict in Ukraine was highlighted on Russian state television by a presenter who reacted in this way to the news of the sinking of the Moskva ship.

Olga Skabeyeva, a presenter and political commentator of the channel Rossiya 1, Olga Skabeyeva, maintained the line of the government of Vladimir Putin that affirms that the flagship of the Russian fleet in the Black Sea sank as a result of a fire.

However, he spoke of an escalation by Ukraine – which claims its missiles hit the ship and caused it to sink – that could “safely be called World War III”.

“We are definitely fighting against NATO itself,” said the woman, one of the most loyal voices to the Kremlin on Russian television.

And here we have it – in a rant seemingly aimed at explaining to viewers why the “special operation in Ukraine” is taking so long, Russian state TV presenter Olga Skabeyeva says her country is fighting World War Three against Nato

In the same confusing line that, on the one hand, blames Ukraine for the sinking but, on the other, rejects the idea of ​​a missile attack, experts accompanying Skabeyeva described the event as “an absolute cause of war, 100%” And they said “there’s nothing to think about, There has to be an answer.” slipping even the need for a nuclear attackas reproduced TheDailyMail.

Another Russian TV show, Vremya Pokazhet, he claimed that the West was supplying “trillions of weapons” to Ukraine and that, in a demonstration to them, Kyiv was carrying out “yet more bloody, horrible, completely unthinkable provocations.”

The host of that Russian television program, Olesya Loseva, he said the West believes that “Russia is a country that is not worthy even to be on the world map and that all Russians should simply be wiped off the face of the earth.”

On Channel 1, also state-owned, a military commentator, Dmitry Drozdenko, claimed that “the West has been preparing for war for a long time” and that Russia is facing “a large-scale, multi-level war” against the “collective West.”

The symbolic defeat of losing the flagship of its fleet in the Black Sea also had an official reaction from Russia. The Ministry of Defense promised today increase missile attacks on kyiv in response to alleged Ukrainian “military incursions” on Russian soil.

The Moskva was capable of 16 long-range cruise missiles, and its withdrawal from combat greatly reduces Russia’s offensive capability in the Black Sea. The collapse is a serious blow to Moscow’s prestige in a war that is already considered by some to be a historic failure. Entering its eighth week, the Russian invasion has stalled due to resistance from Ukrainian fighters, bolstered with weapons and other aid from Western nations.

During the first days of the conflict, the Moskva would have been the ship that requested the surrender of the Ukrainian soldiers stationed on the Island of Serpents, in the Black Sea. In a recording that went viral, the soldiers respond: “Russian ship, go to hell,” using profanity.

If Ukraine carried out the attack, the Moskva could be the largest warship sunk in combat since the 1982 Falklands War. when a similar vessel, the Argentine ARA General Belgrano, was torpedoed by a British submarine. The more than 300 soldiers of him died.

So, Russia “will not forgive” Kyiv for the sinking of the cruiser “Moskva”, a Ukrainian military official said on Friday.

“We are perfectly aware that they will not forgive us,” Natalia Gumeniuk, a spokeswoman for the military command of the southern region of Ukraine, told reporters. The Ukrainian Neptune missile attack on Moskva, flagship of the Russian Black Sea Fleet, “It not only impacted the ship, but also the imperial ambitions of the enemy,” Gumeniuk said.

“We are aware that the attacks against us are going to increase, that the enemy will take revenge, that there will be missile attacks and artillery shelling. We are ready, we will fight them,” he added.

Grupo de Diarios América (GDA), to which El Nacional belongs, is a leading media network founded in 1991 that promotes democratic values, an independent press and freedom of expression in Latin America through quality journalism for our hearings.

For Russian television the Third World War has already begun